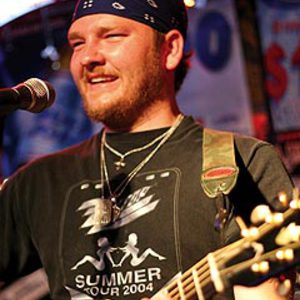 Stoney LaRue (born Stoney Larue Phillips in 1977) is a Texas Country/Red Dirt artist. Born in Taft, Texas, LaRue was raised in Southeastern Oklahoma. At 3 years old, LaRue could be found belting out ?Swinging? by John Anderson on his Mr. Microphone radio. The son of a struggling bass player and a nurse, LaRue understood the allure of music at an early age, and recorded his first works at age twelve.

He earned accolades through school for his unmatched vocal abilities and promising instrumental talents. Many subscribe Stoney LaRue to the category of artists that are simply natural born performers, just don't try to limit him by category.

Born in Taft, Texas, LaRue actually spent the majority of his adolescence north of the Red River, where he was raised in Southeastern Oklahoma . He never really pictured himself doing anything else but making good music, so LaRue eventually made his way to the state's Red Dirt hotbed of Stillwater, where he began to develop his individualized style from a widespread range of influences.

From Willie Nelson to Ray Charles, to The Grateful Dead and Kris Kristofferson, LaRue's emerging style impressively blends varied elements of country, blues, and soulful rock into cohesive, vocal driven performances. His abilities earned the immediate respect of then ?up and coming? peers including Cody Canada, Mike McClure, Jason Boland, and other cohorts of the revitalizing Texas and Red Dirt circuits (now electrifying audiences nationwide.)

In 2002, both fans and industry took good notice of LaRue after he spearheaded The Organic Boogie Band and released ?Downtown,? which was recorded in private sessions at Cain's Ballroom in Tulsa and mixed in a trailer on the side of a cliff in Bartlesville,OK. It was just the beginning, as the debut cemented LaRue's following and inspired a move to New Braunfels, Texas, where a vibrant music community and a persistent touring schedule spawned a vast response.

Fans anxiously awaited the August 2005 release of Stoney LaRue-the Red Dirt Album, which hit the Billboard sales charts in its debut week. A far cry from the mixing trailer on the cliff, The Red Dirt Album was recorded with a tight circle of players and professionals in a studio setting. The record was a pinnacle effort for LaRue and has inarguably established his triple threat status as a truly gifted vocalist, player, and performer.

Armed with golden ear musicianship, an amusing wit, and soulful magnetism, LaRue's shows are infused with an uplifting quality, a cathartic barroom brand of spirituality, where venues are complimented for good bar ?feng shui,? and where time and dimension can be traversed via emotive lyrics and melodic riffs. A charismatic performer, LaRue's flawless vocals can draw a crowd to a open mouth level of sonic mesmerization, and next have them singing ?Forever Young? so loudly that you can't hear anything else.

At 28 years old, Stoney LaRue now performs close to 300 dates a year at top festivals and venues across the nation and even the Caribbean, sharing bills with renowned acts like Lee Ann Womack, Gary Allan,Dierks Bentley, Cross Canadian Ragweed, Ray Wylie Hubbard, Radney Foster, and others. With a newly assembled band that includes Jeremy Bryant (drums), Jesse Fritz (bass), Rodney Pyeatt (guitar), and Steve Littleton (keys), Stoney LaRue is poised for his upcoming addition to the famed Live at Billy Bob's series and even greater horizons to come.

The music is undeniably inside of Stoney LaRue, but he's the type of artist that doesn't HAVE to point it out to you, his belief in the music is strong enough that it just powers through transparently. Stoney LaRue is not trying to be anybody but the artist that he is, and his sincerity just seeps out, spills off the stage, and overtakes any room.