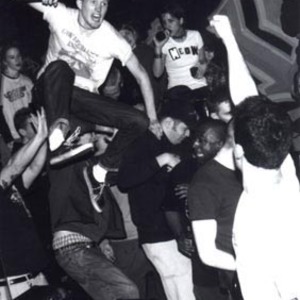 Since 2005, the name No Justice has become a familiar fixture on Texas radio, charting seven Top 10 singles and a pair of No. 1s in only a four-year span. During that time, the five-piece from Stillwater, Oklahoma also became a polished touring machine, playing nearly 200 shows a year and every square inch of roadhouse in the Lone Star State and then some. After recording three albums and building up a formidable grassroots following, No Justice lead singer and guitarist Steve Rice realized that even a state the size of Texas has its borders.

It was time for No Justice to introduce themselves to the rest of the country.

By late 2009, the group had landed a new record deal, partnered with a veteran artist manager and made the decision to record their next project, called Second Avenue, in Music City, USA. The band's Country leanings were certainly a fit for Nashville, says Rice, while the No Justice sound had developed over the years into a well-balanced compound of roots, red dirt, country and blues.

?We're honored to be associated with the music and those legendary musicians from Texas and Oklahoma,? says Rice. ?We have a strong connection to our fans down there. No Justice is a diverse band that's been inspired by a lot of different artists, and because of that, we appeal to just about anybody, from 5-year olds to 50-year olds, from cowboys to punk rock chicks.?

Like Rice, the rest of No Justice ? guitarist Jerry Payne, bassist Joey Trevino, drummer Armando Lopez and new lead guitarist Cody Patton ? are excited about the future. The new album, produced by Dexter Green (Collective Soul), is their first studio effort in several years and the band's first album for their new label, Carved Records.

?We're really proud of this new record,? says guitarist Payne. ?I think our fans ? both new and old ? are going to enjoy this. Bringing in Dex Green was really valuable in refining the No Justice sound. We're also thrilled to be on board with Carved Records now. Tim and his team are great people ? just as focused as we are. It's an exciting time for all of us.?

?The stars just kind of aligned for us when it came to signing No Justice,? explains Carved Records CEO Tim Porter. ?Carved had just opened its doors and we were looking to sign an act that had a strong identity. We aren't interested in cookie-cutter bands at this label; we want artists that know how to put on a live show, write great songs and aren't afraid to work. No Justice has all three in spades.?

True enough, the No Justice resume speaks directly to their hard-touring work ethic, having shared stages with acts like Willie Nelson, Dierks Bentley, Charlie Robison, Billy Joe Shaver, Gary Allan, Cross Canadian Ragweed, David Allan Coe, Pat Green, Chris Ledoux, Jack Ingram and countless others during the band's career. It was their reputation as one of the region's premier live acts that resulted in their 2007 release, Live at Billy Bob's Texas, an honor for any band that has played the legendary Texas honky-tonk.

In early 2010, No Justice returned to the studio to begin their latest effort, Second Avenue.

?We called it Second Avenue because we felt like we were going in a different direction with our ideas on this record. It's kind of a rebirth for us, like we've got a second chance to do some things we've been wanting to do for a while now,? says Rice.

The lead singer found himself writing or co-writing eight of the tracks selected for the final album, often collaborating with Nashville songwriters like Clint Ingersoll, Derek Hoke and Danny Green. Special guest appearances by Rebecca Lynn Howard and Johnny Cooper rounded out the band's first full-album Nashville recording experience. The new record should be out sometime in the spring, Rice says.

Although fans will certainly recognize that familiar No Justice sound, the time spent in Music City certainly won't escape the ears of Country radio, either. It's a natural evolution for the talented group from Stillwater. Or, as Rice simply calls it, ?just a facelift.?