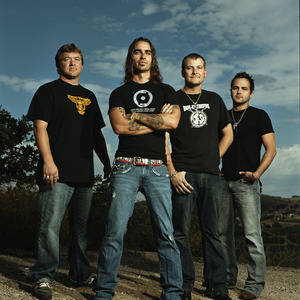 The members of Cross Canadian Ragweed -- Grady Cross, Cody Canada, Randy Ragsdale and Jeremy Plato -- have known each other pretty much since kindergarten in the band's hometown of Yukon, Oklahoma. They all wanted to get out, and music seemed like a good escape. When they all had graduated (except for Ragsdale, the youngest member), they started jamming at a party, and Cross Canadian Ragweed was born. Yukon as a rule wasn't a very musician-friendly town, but they had one notable local squarely in their corner: Ragsdale's father Johnny.

"My dad was a guitar player. He played with Bob Wills and a little bit with Reba McEntire when she was first starting out," says Ragsdale. "He really didn't want me to be a drummer but I insisted. I found a set of drums in a neighbor's trash one day and hauled them into the cellar. He kind of figured out after about a year that I was serious and finally got me a new drum set. And when he met Cody, he realized his talent and how seriously we wanted to take music, and he really pushed us. He completely drove us up the wall, but later down the road, we realized he did it for a good reason."

Once the band got its chops they moved to Stillwater, Okla., where acts like Mike McClure's Great Divide and singer-songwriter Jimmy LaFave had established enough of a local scene to earn Stillwater the nickname "North Austin" (or, depending on your perspective, "West Nashville"). Inspired by McClure's self-penned Great Divide songs (and more than a little by early Steve Earle), the band quickly grew out of its Merle Haggard and classic rock covers and began focusing on Canada's uncommonly honest and straight-forward originals. A potent foursome of albums -- 1998's Carney, 1999's Live at the Wormy Dog, 2001's Highway 377 and 2002's Live at Billy Bob's Texas -- collectively sold more 70,000 copies to date. Combined with the band's average of 200 gigs a year, Cross Canadian Ragweed cinched a place at the top of the Texas-Oklahoma music totem pole.

"We're a little more rock 'n' roll than other people [from the Oklahoma/Texas scene], and that's not a bad thing," laughs Canada, whose Southern-fried lead guitar licks betray his love of heroes like Stevie Ray Vaughan, Pete Anderson (of Dwight Yoakam fame) and Eddie Van Halen -- not to mention the fact that he's been playing since he was 8 years old.

After building a huge concert following in Texas and Oklahoma, the band decided to look into signing a record deal. In 2003, fledgling label Universal South released a self-titled album (produced by McClure) that the band recorded prior to signing their record deal. They released Soul Gravy in 2004 and Garage in 2005.

Happiness And All The Other Things

Happiness & All the Other Things

Back To Tulsa Live & Loud At Cain's Ballroom