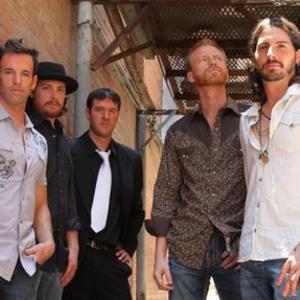 Micky & the Motorcars is an American alternative Texas Country band formed in Challis, Idaho before moving to Austin, Texas. With their own band of Americana rock, the band brings an optimism and integrity only acquired when its been performing so long the only thing left to tell is the truth. Five albums after MMC was founded in Challis, Idaho, in 2002, the band still writes more than 90 percent of its music as it defines the lives of brothers Micky Braun (vocals...

With their own band of Americana rock, the band brings an optimism and integrity only acquired when its been performing so long the only thing left to tell is the truth. Five albums after MMC was founded in Challis, Idaho, in 2002, the band still writes more than 90 percent of its music as it defines the lives of brothers Micky Braun (vocals, acoustic guitar) Gary Braun (vocals, guitars, mandolin, harmonica) childhood friend Mark Mccoy (bass), Kris Farrow (guitars, saxophone) and Shane Vannerson (drums, percussion).

Micky and the Motorcars may be self-described as ?a little rough around the edges,? but with its rocking sound, MMC shares real thoughts, is full of depth, and has a honest, raw emotion and energy bleeding through Micky's heart straight out into the crowd. Anyone who has ever loved and lost or loved and drank or loved at all knows exactly where he's coming from and what he's talking about in a sincere, piercing way.

It's also made Micky one of the most sought after songwriting collaborators on the scene, and consequently MMC songs have credits to brother Willy Braun, Randy Rogers, Cody Canada, former Jack Ingram bassist Robert Kearns who now can be seen backing Lynyrd Skynyrd, as well as Kevin, Dustin and Savannah Welch. Throughout its tenure, MMC's Braun front men have been quoted repeatedly as ?just wanting to play good songs.?

For Micky and Gary, whose genetic musical legacy precedes them, playing and singing is damn near the only life they've ever known. The boys grew up in the Western mountains, playing music with their family: older brothers (Reckless Kelly's Willy and Cody Braun) and father (full-time musician, Muzzie Braun). The boys' paternal grandparents were both were full-time musicians as well, and the boys watched their father play in his own Braun brother band with their uncles Billy and Gary.

For MMC's Braun brothers, they hope to create their own legacy ? of doing what feels good, what sounds right, and hoping it pays off. So far, it has. MMC has come a long way from playing for free and sleeping on random floors and couches to its most recent debut, ?Micky and the Motorcars Live at Billy Bob's Texas? and adding the three-disc (two CDs and one DVD) compilation to its discography.

The compilation features songs from 2002's ?Which Way from Here,? 2004's ?Ain't in It for the Money,? 2007's ?Careless, and 2008's ?NA?VE,? takes the audience member center stage to experience Micky's edgy, boy-next-door crooning and the rocking licks Farrow throws across a driving beat.

Now, travelling nationwide more than 200 days year, the most rewarding thing for MMC is watching the crowds they perform for with the same raw emotion from the live release get bigger as Micky and the Motorcars head on down the road. There's an excitement, Gary says, never really knowing how everything is going to work out. But the ups and downs of the road somehow make it all worthwhile for the Motorcars, who don't have any plans of slowing down.

Ain't In It For The Money

Which Way From Here