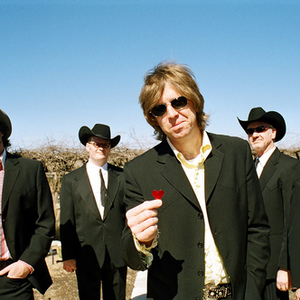 When the Derailers began recording, they gave each album a name indicating its order in their discography. Jackpot was No. 1; Here Come the Derailers was fourth. They had to quit after that because the titles started getting too long. Which is why No. 9 is a simple little declaration: Guaranteed to Satisfy. As if anyone who knows the band's work would have any doubt. The Austin, Texas-based quintet, united by a passion for Buck Owens and the Beatles ? with some Buddy Holly thrown in ? has been satisfying audiences for 15 years.

And this release, filled with their tried-and-true blend of honky-tonk, rockabilly and good ol', Texas-flavored rock ?n' roll, is guaranteed to hit even more sweet spots.
Recorded in San Marcos, outside of Austin, Satisfy's 12 cuts are the definition of feel-good music. Produced by lead singer/songwriter/guitarist Brian Hofeldt (who also helmed their last release, Under the Influence of Buck), it's a fine mix of two-step-ready tunes and equally danceable, hold-your-sweetheart-close ballads. The Oklahoma native also wrote or co-wrote all but one of them, a cover of James Burton's ?Corn Pickin'.? (Burton is one of Hofeldt's top three guitar heroes; the other two are George Harrison and Don Rich, who helped develop the Bakersfield sound as a member of Owens' band.)
?I've been doing a lot of producing over the years and it's something that I'm really into,? Hofeldt says. ?I just felt like I wanted to do this record. I may be cured of that now,? he jokes. ?It's sort of like doing surgery on yourself. But we came out with a good one I'm proud of. And the whole band is, too.?
?The whole band? would be Chris Schlotzhauer on pedal steel, Dobro and vocals; Sweet Basil McJagger on keyboards; Scott Matthews on drums and percussion; and new member Kevin Smith on electric and acoustic bass and vocals.
One of the first people Hofeldt met when he rolled into Austin in 1992, Smith, then in a group called High Noon, also was one of the reasons Hofeldt decided to stay.
?His band gave us our first forays into performing for Austin audiences,? Hofeldt says. ?So it's a little bit of a full circle. To have him become a member of the Derailers is like putting on a comfortable pair of jeans. It's a great fit for us.?
Former bassist Ed Adkins chose to leave amicably after nine years, but not before co-writing a song with Hofeldt, the late-?50s/early-?60s-reminiscent ?Bittersweet Teardrops.? Hofeldt calls it ?a swingy-dingy thing ? a fun little throwback song.?
Though most of this outfit's tunes could be called throwback songs, that doesn't mean they're reproductions or imitations. In fact, the Derailers' appeal lies in their ability to meld their influences ? and pay homage to their heroes ? without merely aping those artists' sounds.
But when they want to pull out a little Carl Perkins or British Invasion or even Elvis, it's no problem. Hofeldt's vocals are almost a ringer for the King's on the murder ballad, ?The Blood of a Man.? That's one of three Guaranteed songs co-written with legendary tunesmith Buzz Cason (?Everlasting Love?), who co-produced the Derailers' Soldiers of Love. Hofeldt first heard of Cason the same way so many music fans did ? by tracing the lineage of Beatles songs.
?That's how I learned about Carl Perkins and Chuck Berry and other people like that,? Hofeldt recalls. ?It was such a great pool that they dipped from. One of the people I dug back to was Arthur Alexander, who had written ?Anna.' They also cut another Arthur Alexander song, called ?Soldier of Love,' which was a song Buzz had written. So I got to know Buzz. It turned out to be one of the greatest musical meetings I'd ever had.?
He brought Cason an idea for a song about someone who just doesn't get a good shake in life ? a murder ballad in the great country music tradition.
?It's a song of redemption,? he adds. After years of reading reviews citing this or that ?powerful song of redemption,? as if that were some sort of requirement for success, Hofeldt deadpans, ?Now the Derailers have their song of redemption. I feel like we've made it.?
As far as Hofeldt is concerned, that success has a lot to do with his supportive wife of five years, ??. Three Guaranteed songs ? ?The Sun is Shining on Me,? ?The Way You Move? and ?Without You? ?address that general theme. ?I'm very fortunate to be madly in love with her. ? Those of us who have a good woman behind us are lucky because music can be a tough racket,? he understates, adding, ?In any business, in any part of life, it's great to have somebody there, an unconditional cheerleader and lover.?
But the song, ?You Carried Me? is about a different partner ? Tony Villanueva, the childhood friend with whom he formed the Derailers. The song is the last one they wrote together before Villanueva left the band at the end of 2003 to become a minister.
?It's essentially a song for each other about our time spent together,? Hofeldt explains. ?I just felt like including it on this record; it meant a lot to me. And it meant a lot to a lot of other people that I played it for, so we went ahead and cut it. We got a great little string section on it, which is a fun thing to put on a record. Took a little page from the George Martin string arranging school.?
In conversation, Hofeldt frequently slips in such references to his roots ? musical and personal. That's understandable, considering how central they are to his life. ?Without the roots,? he says, ?you don't have a good, full flourishing tree.
?I think you've gotta pay attention to the roots of what you're based upon,? he adds. ?That's something we've always held dear.?
And it's those roots that make the Derailers' music Guaranteed to Satisfy.

Under The Influence Of Buck