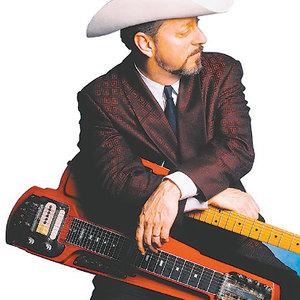 Junior Brown (born 1953) is an American country guitarist and singer from Kirksville, Indiana. He first learned to play piano from his father "before I could talk". His music career began in the 1960s, and he worked through that decade and the next developing his astonishing guitar skills. By the mid-80s he was teaching guitar at the Hank Thompson School of Country Music at Rogers State University, in Claremore, Oklahoma.

In 1985 he invented a double-necked guitar with Michael Stevens (see 1985 in music). He called it a "guit-steel". He actually plays this guitar standing behind it while it rests in a small podium / music stand. The top neck is a traditional 6 string "Fender Telecaster" style neck while the lower neck is basically a full on steel guitar for slide playing. There is a pocket in the body of the guitar to take the slide while not in use. Brown quickly became a local success in Austin, Texas as the house band at the Continental Club. His debut album was 1993's 12 Shades of Brown; it was followed by Guit with It later that year (1993 in music). Both albums cemented his reputation as one of the more critically acclaimed country singers of the 1990s.

In 1996, Brown was featured on the Beach Boys' now out-of-print album "Stars and Stripes Vol. 1" performing a cover of their 1962 hit "409". The song features Brown playing guitar and singing lead with the Beach Boys singing harmonies and backing vocals. Brown also won the CMA Country Music Video of the Year award in 1996 for his video, "My Wife Thinks You're Dead," which featured 6'7 Gwendolyn Gillingham.

Brown's music has been showcased on various tv shows and movie soundtracks, including Me, Myself and Irene, Spongebob Squarepants and The Dukes of Hazzard (film), in which he also played the narrator.

Although Junior Brown is a wizard guitar player in traditional country and Hawaiian steel styles, few of his performances will finish without some amazing blues playing and also a healthy swag of surf instrumentals.

As of August 2006 he is on Bob Dylan's third tour of American minor league baseball stadiums.