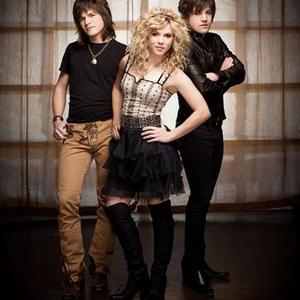 The Band Perry is an American country music band composed of Kimberly Perry (lead vocals, rhythm guitar, piano) and her two brothers: Reid Perry (bass guitar, background vocals) and Neil Perry (mandolin, drums, accordion, background vocals). They were born in Mobile, Alabama, and moved to Greeneville , Tenn. The trio owes its unique sound to its parents. "Most dads would be rocking their kids to sleep singing 'Rock-a-bye Baby,' " Kimberly says.

"Our dad was singing us Rolling Stones songs, and our mom loves country. They definitely cross-pollinated our musical palette.." The trio teamed with Garth Brooks' manager, Bob Doyle, in 2008 and a year later it signed with Republic Nashville.
The band released its debut single "Hip to My Heart" in 2009 and their second single; "If i Die Young", was released June 7, 2010. It peaked at #19 on the Hot 100, making it their biggest hit.