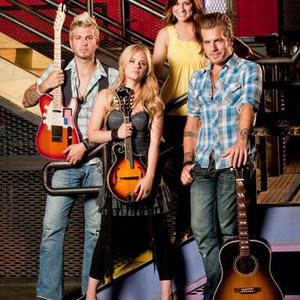 Gloriana is an American country music group founded in 2008. It is composed of brothers Tom Gossin and Mike Gossin (vocals, guitar), as well as Rachel Reinert (vocals, tambourine) and, until July 2011, Cheyenne Kimball (vocals, mandolin). Before the band's foundation, Kimball was the 2002 winner of the competition America's Most Talented Kid and a solo artist on Epic Records. Gloriana released its debut single "Wild at Heart" in February 2009, which has become a Top 15 hit on the U.S. Billboard Hot Country Songs chart.

The group's self titled debut album, Gloriana, was released on August 4, 2009.

Brothers Tom and Mike Gossin were born in Utica, New York. They both took piano lessons from age 6, and Tom began studying guitar with the help of a local jazz musician. Tom, along with third Gossin brother Stephen, founded their own band "Captain Zippy" in high school. Stephen and Tom later moved to Wilmington, North Carolina together, where they attended University of North Carolina at Wilmington, with Tom majoring in guitar. Tom and Mike moved to Nashville, Tennessee, where they began performing as a duo.
Rachel Reinert, a native of Sarasota, Florida, went to high school in Santa Ana, California. After attending a performing arts school, she began writing songs and playing guitar herself. With a teacher's help, she began recording demos, and was signed to a publishing deal at age 15. The Gossins met Rachel through her MySpace page, and she began performing with them after moving to Nashville.
The group's fourth and final member, Cheyenne Kimball, was born in Jacksonville, North Carolina but raised in Frisco, Texas. A performer by age 10, she entered the television talent show America's Most Talented Kid, and won the show's top honor at age 12. One year after her win, Kimball recorded a solo album on Epic Records. This album included songs that she had written with John Rich of Big & Rich, whom she met after a trip to Nashville. When Cheyenne was in her late teens she had a reality show on MTV that lasted one season. She joined the Gossin brothers and Reinert after meeting them in a nightclub, and the four members began writing songs and performing together.

Once the four members of Gloriana were in place, they began recording demos, and sent one to Emblem Records, a label owned by Matt Serletic, a record producer who has worked with Matchbox 20. The four members worked with Serletic, and Nashville songwriters such as Jeffrey Steele, Brett James and Wayne Kirkpatrick, among others. By February the group had signed with the label but had not yet come up with a name.
In early 2009, the group released its debut single "Wild at Heart", which Serletic wrote with Josh Kear and Stephanie Bentley, another former Epic artist. It became the highest-selling country music debut single of 2009.The group also signed to Taylor Swift's 2009 Fearless tour. In May 2009, Gloriana released a four-song digital EP, comprising "Wild at Heart" and three other songs from the album. On August 4, 2009, the band released its self-titled debut, which peaked at #2 on Top Country Albums and #3 on the Billboard 200, shortly before "Wild at Heart" peaked at #15. The album's second single, "How Far Do You Wanna Go?", was released in September. The band won the American Music Award's Breakthrough Artist of the Year in 2009. It was announced on March 16, 2010 that the group had won the 2010 Academy of Country Music's Top New Vocal Group award. On August 18, 2010, "Wild at Heart" was certified Gold by the RIAA.
A third single, "The World Is Ours Tonight," debuted in early 2010. It was included on a March 2010 reissue of the band's debut album.

In early 2011, the group announced the release of a new single, "Wanna Take You Home", which will act as the lead-off single to their upcoming, second studio album, A Thousand Miles Left Behind. "Wanna Take You Home" was released to country radio on March 28, 2011, and has gone on to become the group's fourth Top 40 hit. On July 11, 2011, Gloriana announced the departure of Cheyenne Kimball. The group plans to continue working on their second album without Kimball. Songfacts reports that "(Kissed You) Good Night" was the first song to be heard from the band after they became a three-piece, following the departure of Cheyenne Kimball. The song was made available for purchase on October 4, 2011.

A Thousand Miles Left Behind