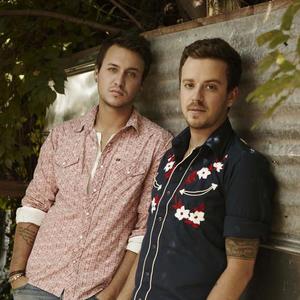 Love and Theft is a bit different from the group that scored a Top 10 hit two years ago with ?Runaway.? But the changes that have affected the group?most notably, signing with RCA Records and downsizing to a duo?have actually brought Love and Theft closer to what it originally set out to be: a band that writes, records and performs honest, soulful country music. While Stephen Barker Liles and Eric Gunderson are proud of their successful first effort, they are excited to have teamed with producer Josh Leo (Alabama, Nitty Gritty Dirt Band) on their RCA effort.

While Stephen Barker Liles and Eric Gunderson are proud of their successful first effort, they are excited to have teamed with producer Josh Leo (Alabama, Nitty Gritty Dirt Band) on their RCA effort. "We love performing" says Stephen. "The way we are recording now is the way our influences made records: live with a band. It's a lot more organic.".?

Eric's earthy voice is the perfect complement to Stephen's high-altitude tenor. The guys happily share lead vocals, harmonize like a church choir, and bolster their band with their own guitar work. ?Stephen and I have always been on the same page as far as the vision for Love and Theft and what we want it to be,? says Eric. ?We feel like we have made the record we've always wanted to make.?

The result is a nod to the duo's varied influences. ?She's Amazing? evokes the brilliant harmonies of the Eagles. The seductive ?Amen? channels all the yearning of Roy Orbison. And the rollicking first single ?Angel Eyes? brings to mind Elvis Presley's ?(You're the) Devil in Disguise.?

While Johnny Cash and Orbison are both enormous influences, it might surprise fans to learn who the duo's favorite artist is. ?Hands-down, Elvis,? says Stephen. ?My dad was really into him, so I got into him. I was all over Elvis growing up.?

Coincidentally, both Stephen and Eric?who didn't meet until they were in their early 20s?were raised as pastors' kids, and their respective fathers fed them a steady diet of gospel, oldies and country. ?Our parents didn't want us listening to secular music that much. But they'd let us listen to Elvis, Roy, the Nitty Gritty Dirt Band?,? says Eric. ?It was cool to grow up that way, and that's still my favorite kind of music.?

It isn't lost on the guys that they're now recording for the very label that released some of their hero's biggest hits. ?We're excited to be on RCA, the same label Elvis was on,? Stephen says with a smile.

Perhaps it was some divine intervention that led the friends to this point in their career. Eric and Stephen, after all, will be the first to tell you that their shared spirituality is a cornerstone of Love and Theft. In fact, both used to lead worship at their churches.

?That's how we got our start playing music. Our faith is a huge part of our lives,? says Eric, pondering the fate of it all. ?I feel like it was meant to be this way from the beginning. Our journey over the past four years was preparing us for where we're at now.?

Which is squarely at the doorstop of a prosperous career in country music. With a young, vibrant sound, a captivating live show, and a passionate fan base, Love and Theft are poised to become the genre's next great duo.

Whiskey On My Breath