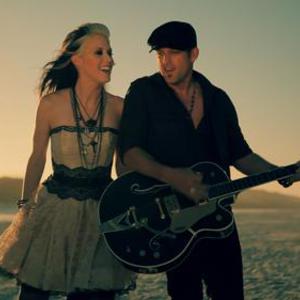 Thompson Square isn't a real place, exactly. It's the musical territory staked out by the husband-and-wife duo of Keifer and Shawna Thompson, an exciting and unpredictable area where country meets rock, rough meets smooth and one vagabond heart finds a harmonious common ground with another. It's the sweet destination where two journeys end and another one begins. ?It's the place where we create our thing, a little fantasyland where we live,? Keifer says.

And now the rest of us get to discover that magical place, starting with the chart-topping duo's self-titled debut album. Fans began truly getting to know their way around Stoney Creek Records' Thompson Square with the release of their GRAMMY nominated #1 Platinum+ radio smash, ?Are You Gonna Kiss Me Or Not,? a fitting introduction to the Thompsons' natural chemistry and spirit of buoyant romance. iTunes' Country Song of the Year (2011) grew meteorically to become the Most Played Song at Country Radio in 2011 (Mediabase) as well as reach the top of the Billboard Heat Seekers Chart. Additionally, ?Are You Gonna Kiss Me Or Not? spent five consecutive weeks at #1 on the Country Digital Soundscan chart and 12 consecutive weeks as the #1 Country Ringtone.

In all, Thompson Square was nominated for 14 industry awards in 2011 also including an American Music Award nomination for New Artist of the Year; two 2011 CMA Awards nominations for Best New Artist and Vocal Duo of the Year and two CMT Music Awards nominations. The duo has played to over a million fans in the past year ? by both having been rapturously received, as an opening act on superstar Jason Aldean's tour and by packing high-energy shows of their own. They've seen the ?Kiss Me? video become a favorite on CMT and GAC, even spending 12 consecutive weeks in the Top 5 of CMT's Top 20 Countdown. They've earned a follow-up Top 10 hit with, ?I Got You,? and traveled the national media circuit, performing on The Tonight Show with Jay Leno, Jimmy Kimmel LIVE!, Conan, Fox & Friends, FOX's All American Concert Series, the 45th Annual CMA Awards, FOX's 2nd Annual American Country Awards, NBC's ?The Better Show,? and more. Thompson Square finishes the year as Billboard's #1 New Country Artist in terms of its single (Hot 100) and album sales (Hot 200) charts. The duo was also named Mediabase's New Country Artist of the Year, in terms of radio airplay. Thompson Square is taking Country music by storm once again with the duo's emotionally-laden current single, ?Glass,? hailed by The Washington Post as a ?poignant meditation on human vulnerability,? a song which allows Shawna Thompson to show off her powerhouse vocals.

In 2012, Thompson Square dethroned superstars Sugarland to become the Academy of Country Music's ?Vocal Duo of the Year.? The win was historic -- Thompson Square became the first NEW Country music act in 20 years to break through and win the award a headlining, superstar duo.

The suddenness of their success belies the fact that?separately and together?Keifer and Shawna have been learning their craft in Nashville for a decade. ?To see it paying off right now is elating,? Keifer says. ?Every day I try to take a little time, soak it all in and say thanks.?

Now Music City is sharing with the rest of the world the pitch-perfect combination of Keifer's soulful intensity and Shawna's crystalline grace; her classic country upbringing and his wide-ranging singer-songwriter influences. Shawna grew up in tiny Chatom, Ala., learning traditional country songs from her guitar-playing father and soaking up the sounds of Reba McEntire and Alabama on the radio. Keifer was raised in Miami, Okla., where he was exposed to everything from Roger Miller and Merle Haggard to punk rock and heavy metal before finding his most profound influences in thoughtful tunesmiths like Bruce Springsteen and Tom Petty. Each moved to Nashville within the same week, and met at a singing competition a few days after hitting town. ?I walked in and saw her, went right up and started talking to her,? Keifer recalls. ?She beat me in pool, and that's where it started.? Like Keifer, Shawna sensed a connection right away. ?I knew immediately,? she says. ?It sounds so cheesy, but it was a love at first sight thing for me.? Each had come to Music City intending to pursue a solo career, and for a few years that's just what they did. ?She was doing her own thing, and I was doing my thing,? Keifer says. ?After a while it made sense to combine what we did. We looked at each other one day and said, ?Maybe we should try to do this.'?

And so Thompson Square was born. They adjusted to the idea of combining the pressures of married life with a career choice that demanded near-constant togetherness. ?A lot of couples can't be together 24 hours a day?but for us it doesn't work unless it's like that,? Keifer points out. ?It's still like we're dating, and we've been married for 11 years. We like to have fun, we like to laugh and we like to rock out?so that's what we try to do.? The pieces truly began falling into place for Thompson Square in 2009, when manager Shawn Pennington caught the couple's show at a Nashville club. Within days Thompson Square was performing for the staff at Stoney Creek Records, and before they knew it they were signing a contract. ?This label has been amazing for us,? Keifer observes. ?They're making our dream come true right now.?

The first step in bringing that dream to life came when the duo hit the studio to record their debut album with their pals in the New Voice Entertainment production team (Kurt Allison, David Fanning, Tully Kennedy and Rich Redmond). ?Doing it with your friends is different than having a big-name head-honcho guy that dismisses everything you say,? Keifer notes. ?We all had a say-so. Every song on this album has a little bit of each of us on it.? Thompson Square and their producers sought and found stellar outside material, but much of Thompson Square is made up of Keifer's own songs. ?It was very important for me to have some original songs I wrote,? he says. ?But we weren't stupid?if there was a better song, we put it on there.?

The album seamlessly combines the twosome's wide-ranging influences into a loose, lively and identifiable sound all their own. ?There are songs that will make you laugh, make you dance, make you cry,? Keifer says. ?We tried to touch upon the whole gamut of emotions.? The playful ?Let's Fight,? for instance, is an upbeat ode to friendly marital spats?and the ensuing reconciliations. ?Shawna and I get along sometimes too good, because it's hard to write sad songs about love lost when you're not experiencing that,? quips Keifer. ?But I thought it'd be cool to write a song saying, ?Let's fight and get things stirred up ? and then make up!'? The Thompsons explore the endless dynamics of couplehood throughout the album, as in the opening rush of the ebullient ?I Got You? and the muscular, mischievous ?Getaway Car.? But they also explore the darker side of relationships, as on simmering ballads like the conciliatory ?If It Takes All Night? and the fragile ?Glass.? It's just one way in which Thompson Square subverts the stereotype of the married couple singing sticky-sweet songs of devotion to one another. ?We don't want to do lovey-dovey songs,? Shawna declares. ?This is real stuff.?

Every day now, more and more fans are getting a taste of that ?real stuff? and deciding they like what they hear?and the Thompsons couldn't be happier or more grateful. ?A year ago we were bartending down on Broadway,? Keifer says. ?To go from behind the bar to the other side of the world, it's been difficult to grasp the magnitude of what's going on. We just try to put out songs that we love, and we hope our fans will like them too. The rest is in God's hands.?

You Make It Look So Good (CDS)