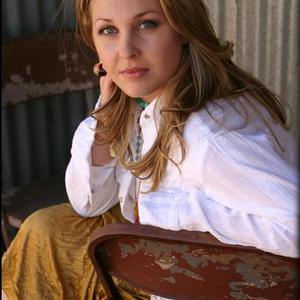 Songfacts says: Texan Country artist Sunny Sweeney's debut studio album, Heartbreaker's Hall Of Fame, was critically acclaimed but failed to impress radio, and none of the album's three singles charted. However, she achieved a breakthrough when From A Table Away became her first record to enter the Hot 100 when it debuted at #96 on the chart dated January 22, 2011. Between having three dogs named Merle, Nash...

Between having three dogs named Merle, Nash, and Dolly and an East Texas accent so pronounced you could pick her out in a crowded honky-tonk from across the room, Sunny Sweeney is so country she probably snores Loretta Lynn melodies in her sleep. That much was clear long, long before she ever got around to recording her debut album, Heartbreaker's Hall of Fame . So what the hell she was thinking when she skipped off to New York City shortly after graduation to pursue a career in theater or comedy instead of conquering the dancehall and opry circuit back home is anyone's guess. Maybe she was just testing herself ? making absolutely sure she was born to be a country singer, not just another pretty young improv-comedian from Longview, Texas, lighting up the Great White Way.

Or, you know, maybe a waitress, nanny, dog walker or cubicle drone. Frankly, there was a spell there in her early 20s when seemed hell-bent on collecting as many different W-2s as she could instead of pursuing her destiny. And she actually did OK at the comedy thing ? after leaving the Big Apple and returning to Texas to hook up with a comedy troupe in Austin. But every time a skit found her singing, it became more and more clear she was just putting off the inevitable.

?My friends in the improv group kept saying, ?Man, you should try singing,'? says Sunny. ?At first I thought they meant ?cause I wasn't good at the comedy stuff, but they were just being supportive and wanted me to succeed at what they thought were my strongest points.?

Her family seemed intent on pushing her in the right direction, too. Her step dad, a musician and songwriter himself, had tried to teach Sunny guitar when she was a child, but it didn't stick. Years later, when he tried again, it did. So much so, she became obsessed. ?He gave me a guitar for Christmas and taught me the three country chords: G, C and D,? she says. ?The next day we drove to Colorado to go skiing, and I played the damn thing the entire way up there and back.?

That was all of three years ago. And she's been making up for lost time ? with a vengeance ? ever since. She played her first ?real? gig, fronting her own band , in September 2004 at Austin's Carousel Lounge. In less than a year, she was holding down weekly residencies at multiple Austin honky-tonk bars and drawing a crowd at each show that countless other artists in the ?Live Music Capital of the World? would kill for. She even scored a short tour or Europe, highlighted by sharing a bill with Dwight Yoakam at a festival in Norway. To say that even her most supportive friends were surprised not so much by her success as they were by how quickly she got her own ball rolling would be an understatement.

Mind, this all didn't just fall into her lap. As she puts it with her characteristic, matter-of-fact bluntness, ?I have busted my ass doing this. The crowds at home started coming pretty steadily after four of five months, but those first months were the longest months I've ever had. I booked myself on like over 200 shows the first year I had a band.?

?This is the hardest I've worked on anything in my life,? she continues. ?But I still cannot believe this is my job . I'm doing what I've always wanted to do, and, honestly, it's the thing I'm supposed to do because I haven't gotten fired yet!?

But the real proof that Sunny Sweeney is doing exactly what she's supposed to be doing is all right there in her first record. Heartbreaker's Hall of Fame , recorded in Floresville, TX and co-produced by Sunny with producers Tommy Detamore (guitar, pedal steel, lap steel, Dobro) and Tom Lewis (drums). It isn't one of those quiet, timid little baby-steps records that slowly grows on you with hints of future potential. It explodes into the room with an ultra-confident, Texas-sized ?HOWDY!? and demands your full attention ? now . Kinda like the time Sunny, as a senior in high school, marched into a choir class and told the instructor she wanted to sing Dolly Parton's ?9 to 5? in the end-of-year-show ? even though she wasn't in the choir and the teacher had never met or heard her before. So Sunny belted out the song on the spot and walked out. (She got the gig ? and an admonishment from the teacher for having not auditioned for the choir sooner.)

Listen to Sunny rip and swagger her way through the dozen songs on Heartbreaker's Hall of Fame , and you can well understand that choir director's frustration: Where has this gal been hiding until now? The first thing that grabs you is her voice ? a big, bold and brassy instrument that brings to mind both the classic female county singers of the '60s and '70s that she grew up on as part of a country-music-loving family (both her grandfather and stepfather are musicians) as well as two of Sunny's biggest modern influences, Natalie Maines and Kasey Chambers, at their most unapologetically untamed. It's a voice that all but screams Sunny's adopted slogan: ?Get your honky-tonk on!?

And on Heartbreaker's Hall of Fame , Sunny does just that. From winning originals like ?Ten Years Pass,? ?Slow Singing Western Tunes? and the title track to classy covers of tunes by some of her favorite writers (including Iris Dement, Thom Schuyler, Keith Sykes, Audrey Auld and Jim Lauderdale, among others), it's an album that has little in common with either pop country or even ?Texas country.? It's country, pure and simple ? as primed for a Lone Star honky-tonk as it is the Grand Ole Opry or any radio station that still makes room for George and Tammy and Merle and Loretta. Clearly, Sunny knows the good country.

?Growing up in East Texas, we had mostly country radio stations, but I was a child in the early '80s right when the genre had started its downfall,? she admits. ?But the first time I heard Merle Haggard, I remember actually thinking, ?Now this guy, his songs are worth a shit!' I'd hear something else I didn't like, and then I'd hear the intro to a Merle song and my heart would stop. And I always loved Loretta, too, but it wasn't until I got older that her lyrics really started to mean so much to me. It was from her that I learned that it's OK to be yourself: write from your heart and what you know.?

And here's what Sunny knows now: this whole singing and writing country music for a living is even better than she ever dreamed it would be, even though she's still getting the hang of doing it on her own. (She only recently hired a small but dedicated support crew to help out ? leaving her more time to focus on writing, be at home in Austin with her dogs, or during her once-a-month trips to Nashville).

?It does make me a bit crazy,? she says of the do-it-yourself route she's chosen for her career so far. ?But even though finding a label would be great, anyone that knows me knows that I won't just settle for the first thing that comes along. I just know that if and when I ever get a chance to sign a record deal, it's going to have to be my way or the highway. And that's no joke! Because I've stuck to my guns through all of this and only play the kind of country music that I want to play, and the fans that I have all seem to dig it, too.?

?That's the coolest part to me,? she marvels, ?that people actually come to a show to see me . That still freaks me out ? but I love every minute of it!?