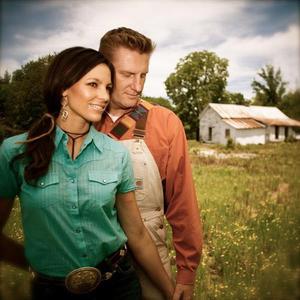 Often times, Nashville goes to great lengths to sell you on how ?real' an artist is. Sometimes they're not quite as genuine as they are advertised to be?but then again, sometimes they really are. When you see husband & wife duo Joey+Rory, you don't need to be told that what they have is genuine. Just listen to their music or listen to them talk and you can tell that what they have is the real deal?not just as a musical duo, but as a couple. The deep connection they have doesn't just shine through their music, it's the reason their music shines.

Which is why their newest album, aptly titled Album Number Two, wasn't born from the success of their 2008 debut. It's actually the result of a night in Nashville ten years ago, when a gorgeously gifted singer named Joey walked into an ?In The Round' songwriters performance. Between finding her seat and the end of the show, she felt drawn to the man onstage simply through his songs. While she wasn't able to meet him that night, she did two years later and over a cup of coffee, she told the songwriting single-dad exactly how she felt. A few short months later, she wasn't just a singer named Joey anymore. She was Mrs. Rory Feek.

For the next 5 years, Joey and Rory lived a simple but glorious life reveling in their roles as husband & wife on the farm where they reside in Pottsville, TN. Joey fell right into place as Mom to Rory's two daughters as she continued her quest for a solo career, eventually recording an album for Sony that was never released. Rory continued to build his status as a hit songwriter punching out chart-topping songs like Blake Shelton's ?Some Beach,? Clay Walker's ?The Chain of Love,? and most recently Easton Corbin's #1 hit ?A Little More Country Than That? along with cuts by Kenny Chesney, Randy Travis, Collin Raye, Reba and many others.

But in 2008, their quiet life changed after they reluctantly auditioned for a reality TV show, CMT's Can You Duet Season I, at the urging of a co-writer.

?There was not an ounce of me that thought ?Here is this beautiful woman and great singer in Joey, but throwing in her 42-year-old, overall-wearing husband will be the magic combination,'? Rory says with a laugh. But it was magic. Joey+Rory became fan favorites ultimately finishing 3rd and landing a record deal with Vanguard / Sugar Hill Records.

Their debut album The Life Of A Song quickly spawned a Top 30 hit with ?Cheater Cheater? and in the blink of an eye, the duo was everywhere?touring coast-to-coast and overseas. Their success with radio/video airplay and album sales propelled them into several nominations for both industry and fan-voted awards, including winning the 2010 ACM Award for Top New Vocal Duo.

The quick success was not something the couple anticipated, as they hadn't thought of their life together as extraordinarily compelling. Fans across the country thought differently. ?The response to the first album has been amazing,? reflects Joey, ?Now, I can't wait for them to hear our new record.?

Album Number Two is built in much the same manner as The Life Of A Song not because it was a successful formula, but because those are the kind of songs these two like to hear. According to Rory, while he has had success writing songs for other artists, teaming up with Joey has allowed him the freedom to become a different kind of songwriter. At the same time, the pairing has unleashed Joey's full potential as a singer as well.

?As a songwriter you have to imagine being somebody different every time you write a song, but the magic of being an artist is you get to be you, to write what you want to say?and I have never had the chance to do that before. I'm not sure Joey ever got to be herself either because there were always teams of people telling her how to dress, not to sing about this and so on. There is none of that anymore. We are 100% ourselves here.?

That freedom is paying off in spades for them. Rory is quick to point out that most of the decisions are led by Joey. In his eyes, ?This is her dream,? he says, ?I just get the best seat in the house to watch it happen!? As much as they are a duo both onstage and in life, he's happy to be the man standing just outside the spotlight so that the world can focus on his songbird of a wife.

Led primarily by Joey's honey-laden vocals, Album Number Two covers all the bases from their signature tongue-in-cheek style of the title cut to ?That's Important To Me,? a song that encapsulates the down-to-earth values that define Joey+Rory both as a couple and a duo alike. There are songs about love (?Born To Be Your Woman?), about cheating (?God Help My Man?), and about faith (?Where Jesus Is?). Songs about cowboys (?All You Need Is Me?), horses (?The Horse Nobody Could Ride?), and about fame (?Farm To Fame?). Most striking however, is the album's lead single, a working man's anthem and a tip of the hat to country music fans and concert-goers, ?This Song's For You? featuring the Zac Brown Band that Rory wrote on a tour bus with Zac Brown.

Not all of the songs on Album Number Two are newly written, which ironically is another product of having been turned loose of any inhibitions or corporate direction. A prime example is ?My Ol' Man,? a song resurrected from Rory's files that is so powerful it punches you in the heart with little more than bare-knuckle lyrics and a lush piano.

Through a mixture of traditional country flavor and new millennium marketing, including corporate sponsorships, reality TV and a national ad campaign with Overstock.com, Joey+Rory have built an impressive fan base and won CMA & ACM nominations and awards their own way.

?TV exposure is unique,? notes Joey. ?Not only do people hear our voices, they get to look into our eyes and see who we really are, on a deeper level. A lot of our fan base comes from people who seem to relate to our story and how we interact.

?It's such a blessing to get to play music and travel and see things we've never been able to see before. But the highlight of it all is being able to do it together.?

With Album Number Two tucked firmly under their arms, Joey+Rory are headed out with the same intent they had the first time around.

?Our plan is the same as it's always been - to show up, do what we do and hope that magic will happen,? says Rory. ?As hard as we work, we ultimately know that God's plans are a lot bigger and better than we can make ourselves. Just having the chance to record and release ALBUM NUMBER TWO is proof of that!?

The Singer And The Song (The Best Of)

Hymns That Are Important To Us

Country Classics: A Tapestry Of Our Musical Heritage

The Life Of A Song