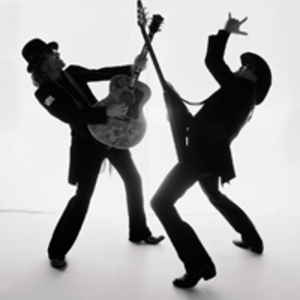 Big & Rich is a country duo that believes in "Country Music Without Prejudice." They are 2 of the 5 leaders of the MuzikMafia, which includes artists like Gretchen Wilson, Jon Nicholson, Cowboy Troy, and others. Big & Rich tend to mix different genres together with country, usually rock. One of their most notable songs is "Save a Horse, Ride a Cowboy." Big Kenny Alphin and John Rich met in 1998 at a bar where Big Kenny was playing.

They met up afterwards and made appointments to write songs together. Eventually, they launched an album together in 2004. It was called Horse of a Different Color. Their second album is called Comin' to Your City and was released on Nov 15, 2005.

Their 2007 album was entitled Between Raising Hell and Amazing Grace. The lead single off that album was the romantic 'Lost in This Moment'. They achieved their first number one song to date with this release.

The That's Why I Pray Songfacts reports that the first single released by Big & Rich following a hiatus in which Big Kenny recovered from a neck injury and John Rich released a solo debut album made history. When That's Why I Pray debuted at # 24 on the Billboard Country chart, it became the highest debut by a duo in the Nielsen BDS era.

Did It for the Party

That's Why I Pray (Single)

Between Raising Hell And Amazing Grace

Comin' To Your City

Horse Of A Different Color