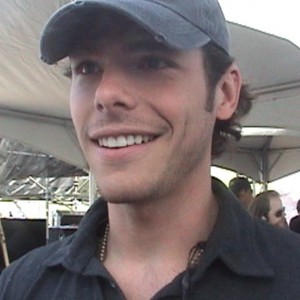 Still in his 20's having played two tours in Europe, three tours in Iraq and Kuwait for the American Soldiers, and three shows at the White House including two for President Bush himself, Granger Smith will never say he didn't ?Live life to the lees.? ?Music is what I do? quips Smith. ?If I can help someone get lost in the moment of a song long enough to forget the worries of the world or long enough to remember what's most important, then I've done my job.? Granger's musical contributions are not limited to the exotic travels or remote locations.

Since his early teens, the native Texan has been writing, singing and honing his craft as a musician. At 19, his work paid off by landing him a songwriting contract with the world famous EMI Music Publishing in Nashville. Smith, a former member of the Corps of Cadets at Texas A&M, followed his dream east on what would be a five year stay in Tennessee. ?That experience at 19 years old was critical in developing who I am today as an artist,? says Granger. ?I tried to soak in the craft of songwriting like a sponge from the older guys I was paired with. I credit so much of my learning to those mentors.? In 2004, upon signing a new publishing contract under singer Phil Vassar, Granger was given the freedom to return to Texas and rediscover himself as an artist. He re-entered the Texas market and re-enrolled at Texas A&M University. Over the next two years, Smith released three albums and received his bachelor's degree from A&M all while tearing up the Texas highways on the way to the next concert. As an aid to developing his signature sound, Smith recorded and produced his most recent albums himself in his own studio with his own band. ?The freedom to take our time in the studio with my own band is priceless,? says Granger. In appreciation to his alma mater, Granger wrote the song ?We Bleed Maroon? with proceeds going to a scholarship fund for incoming students with exceptional spirit. The song was quickly adopted as a modern day anthem for the school and the music video is still played on the jumbotron at Texas A&M home football games. On May 31st 2008, the song was taken even higher when it traveled on the Space Shuttle Discovery with Astronaut Michael Fossum and the STS-124 Crew. Although his songs alone, chiseled from deep roots in country and rock music seem to capture all generations from all over the world, Granger Smith was born to be an entertainer. People are naturally drawn to his charisma from casual music lovers to esteemed diplomats, from young children to the President of the United States himself. Granger Smith is an adept presence both on stage and through the speaker, a young artist whose flair stands at level with some of the greatest country musicians and who will someday, given a continued rise in popularity, be heard and seen throughout America. However, the imminent question must be asked: Is the world ready for Granger Smith?

When The Good Guys Win

Don't Listen To The Radio