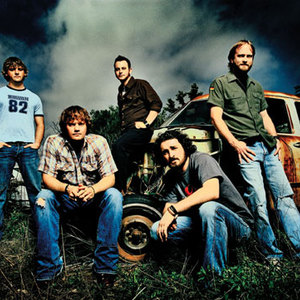 Randy Rogers Band is an American "Texas Country" group from the state of Texas that formed in 2000. The band is composed of Randy Rogers (lead vocals), Geoffrey Hill (guitar), Jon Richardson (bass guitar), Brady Black (fiddle), and Les Lawless (drums). When the Randy Rogers Band's last project debuted as the most-downloaded country album on iTunes, plenty of the industry ?insiders? on Music Row were left scratching their heads: Who are these guys?

When the Randy Rogers Band's last project debuted as the most-downloaded country album on iTunes, plenty of the industry ?insiders? on Music Row were left scratching their heads: Who are these guys?

The Nashville elite may not have known about the five-piece band, but much of America already did. Rolling Stone magazine ranked them alongside such artists as U2 and the Stones in its list of Top 10 Must-See Artists in the summer of 2007. They earned $2.5 million?a staggering total for a still-developing act?on the tour circuit in a single year. Willie Nelson, the Eagles, Gary Allan and Dierks Bentley all picked them as opening acts for their concerts. And more than 2,200 people showed up and bought the bands album at an appearance at Wherehouse Music.

The fans' exuberance was shared by USA Today, which praised the band for having ?loads of grit, swagger and heart.?

The Randy Rogers Band built its audience by combining forces: It's a dynamic live act centered around songs that fit the rowdy, party vibe of the concert circuit, but their songs also say something.

That's particularly true in their album, The Randy Rogers Band, in which a dozen persuasive tracks give the listener plenty of reasons to want to down a celebratory brewski. But the songs also maintain a depth that makes them powerful and provocative even beyond their edgy arrangements and tough-guy sound.

Invariably, the songs are about people making choices and dealing with the consequences they bring. That's the case in the opening ?Wicked Ways,? in which a string of wild endeavors leaves an out-of-control adult in need of redemption. It's true in ?When The Circus Leaves Town,? where a performer comes to terms with the emotional crash that accompanies the conclusion of a pumped-up show. It's even a tenet in ?One Woman,? a ballad that finds a former playboy recognizing his old choices and behaviors were a shallow pursuit next to the promise and solidity that stand before him.

?These songs are definitely true, and they're relatable to many different life situations that I've either gone through in the past or will go through in the future,? Rogers, the lead singer and primary songwriter, says. ?I just tried to create believable characters and relatable characters. I hear from fans that we really have helped them in real-life situations when they've applied the songs to their everyday life. That's what I strive for in the songs that I write.?

?We're not old, but we are getting a little bit more mature,? bass player Jon Richardson asserts, drawing laughter from the rest of the band. ?We're trying to be more mature, anyway. And that's something that we can write about a little more naturally now instead of ?Here's a song about how much fun I had' or ?Here's a song about a girl.' That's probably just a natural progression of our own lives being reflected in our songs.?

Indeed, the Randy Rogers Band is confronting the same questions about relationships and identity that face many of the college students and young adults that form the centerpiece of the group's audience. The balancing act between work, home and recreation is a difficult one?even tougher for an ensemble that spends more than 200 days annually on the road.

?All the guys, except for Jon, are married or soon to be married,? guitarist Geoffrey Hill observes. ?Les [drummer] and I both have kids. So sometimes it feels like you've really gotta struggle to fit all that into your life, I guess, but it's kinda part of the game. I always said that I play music for free, and I get paid to leave the family behind and go on the road.?

That requires a constant rededication to the group, a commitment the five members have repeatedly made since the current lineup coalesced in 2003.

The Randy Rogers Band's status as a group has occasionally confused its audience, which sometimes assumes Rogers is simply a solo artist. It's the same issue that acts such as Huey Lewis & The News and Edwin McCain have battled, though one that doesn't concern RRB all that much.

?I don't think it's an issue at all,? fiddler Brady Black asserts. ?I think when we got together, Randy had already had a band, and his name had been out a little bit, and so we just kind of went with it.?

Actually, the name came rather innocently. Rogers had developed a following, he played open-mic nights, impressing club owner Kent Finlay enough to offer Rogers his own regular night, as long as he found a band to back him.

That group might have taken his name, but Rogers?who'd had previous experiences as a guitar player in another band?had no interest in being just a one-man show.

?I always wanted everybody to be equal, not only financially but also input-wise and creatively,? he says. ?When we started the band, I pledged to them that I would work every day as hard as I could and try to get us down the highway a little further if they would sign up with me and share in some of those sacrifices, and I think from that day on, everybody pretty much quit their alternative jobs, and kinda gave 110 percent to the band.?

The Randy Rogers Band took the same slot that George Strait and the Ace In The Hole band had once occupied at Cheatham Street, appropriate since the band used the same sort of inner motivation in building its sound as Strait did a generation ago.

Their music is hardly the same. In contrast to Strait's pure-country aesthetics, RRB combines that traditional country sound with a rollicking, swagger influenced by rugged sounds from such diverse sources as Waylon Jennings and Stone Temple Pilots. But, as Finlay recognized, there's an authenticity and honesty to the band that parallels Strait's personal manifesto.

?In a way, George was a little bit out of the box for Nashville when he debuted,? Rogers notes, ?I think George Strait, when he first hit town, he knew who he was, and I think that's partly why he has been so successful throughout his career. If there's a correlation between the two of us, I think that we definitely have a sound and we know who we are.?

?We shut ourselves up for 10 days and had a band-camp set up,? Richardson observes. ?There weren't any distractions. It wasn't like we were all goin' home every night and comin' back the next day. We were just living and breathing it for 10 days or so. We were just completely absorbed by it.?

The consequences of that choice are just as absorbing for the listener. The album ranges from the hypnotic country of ?Buy Myself A Chance? and the first single, ?In My Arms Instead,? to the propulsive buzz of ?Never Be That High? to the painful conclusion, ?This Is Goodbye.?

Rogers' various performances reflect the wide-ranging influences that snapped together in the process, evoking at times the sneer of Steve Earle, the soul of Bakersfield's Monty Byrom (formerly of Big House) and the vulnerability of Keith Urban.

With its infectious hooks and daring attitude, the album underscores the iTunes popularity of the Randy Rogers Band, its critical appeal and its significance on the nation's concert circuit, where they've broken attendance records at numerous clubs across the heartland. Even Kenny Chesney, who consistently places among the top-selling tours, saw the group's blue-collar connection when he covered Rogers' ?Somebody Take Me Home? for the album The Road And The Radio.

Each of the five members recognizes his contribution to the Randy Rogers Band's overall unity, and they repeatedly make choices?creatively and personally?that keep that all-for-one-and-one-for-all solidarity intact.

Watch This (With Wade Bowen)

Just A Matter Of Time