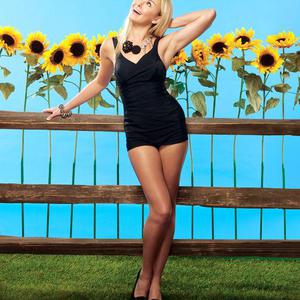 Laura Bell Bundy most recently starred as Elle Woods in Legally Blonde the Musical on Broadway (for which she was Tony nominated). After signing to Mercury Records Nashville, she released Giddy On Up as her debut country music single. According to the Giddy On Up Songfacts, the accompanying album, Achin' And Shakin' is split into two parts representing the two sides of her personality. She starred as Sherrie Christian in the musical Rock of Ages in Los Angeles.

She starred as Sherrie Christian in the musical Rock of Ages in Los Angeles. Also on Broadway, Miss Bundy originated the role of Amber Von Tussle in the Tony Award-winning musical Hairspray and performed the role of Glinda in the smash hit Wicked. Prior to that she also originated the role of Tina Denmark in Ruthless, The Musical! which was a successful off-Broadway production for which she received the Outer-Critics Circle award Nomination for Outstanding Actress in a Musical and Drama Desk Nomination for Outstanding Actress in a Musical. That same year Ruthless! won the Outer Critics Circle Award for Best Off Broadway Musical. Miss Bundy twice starred in Radio City Music Hall's Christmas Spectacular. Regionally Miss Bundy played Dainty June in Gypsy starring Betty Buckley and toured with the National tour of The Sound of Music starring Marie Osmond. She has been performing featured or leading roles in New York and Regional Theatre since the age of nine.

In addition to her theatre work, Miss Bundy has been working consistently in film and television including Modern Men for the WB, Cold Case for CBS, Veronica Mars for UPN, Home Improvement for ABC and Strangers with Candy for Comedy Central. She has also had leading roles in pilots such as Dirtbags for FOX and All Grown Up for CBS. Additionally Miss Bundy played the role of Marah Lewis in The Guiding Light from 1999-2001.

She can next be seen in the film version of Dreamgirls for DreamWorks. Her other film credits include Jumanji, Life with Mikey, and The Adventures of Huck Finn.

Another Piece Of Me

That’s What Angels Do (CDS)

Giddy On Up (CDS)

Longing For A Place Already Gone