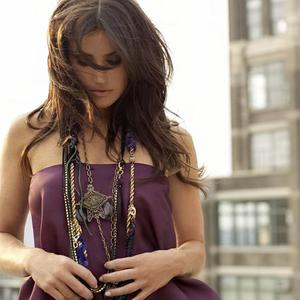 Idina Kim Menzel (pronounced /??di?n? m?n?z?l/; n?e Mentzel; born May 30, 1971) is an American actress, singer and songwriter. She is widely known for originating the roles of Maureen in Rent and Elphaba in Wicked. Idina was born on Long Island, New York, to a Jewish family. Her mother, Helene, is a therapist, and her father, Stuart Mentzel, worked as a pajama salesman. She was raised in Syosset, New York, with her younger sister Cara, and later changed the spelling of her last name (Mentzel) because of constant mispronunciation.

Idina was born on Long Island, New York, to a Jewish family. Her mother, Helene, is a therapist, and her father, Stuart Mentzel, worked as a pajama salesman. She was raised in Syosset, New York, with her younger sister Cara, and later changed the spelling of her last name (Mentzel) because of constant mispronunciation.

When Menzel was 15 years old, her parents divorced and she began working as a wedding and bar mitzvah singer. A job she continued throughout her time at New York University's Tisch School of the Arts. She earned a Bachelors of Fine Arts degree in Drama at NYU.

In 1995, Menzel auditioned for Rent, which became her first professional theater job and her Broadway debut. Rent opened off-Broadway at the New York Theatre Workshop on January 26, 1996. it moved to Broadway's Nederlander Theatre due to its popularity. For her performance as Maureen Johnson in the original cast, Menzel received a Tony nomination as Best Featured Actress in a Musical. Her final performance in the musical was on July 1, 1997.

Following the success of Rent, Menzel released her first solo album entitled "Still I Can't Be Still" on "HollyWood Records", Menzel also originated the role of Dorothy in Summer of '42 at Goodspeed Opera House in Connecticut, starred as Sheila in the New York City Center Encores! production of Hair and appeared on Broadway as Amneris in Aida. Menzel earned a Drama Desk Award nomination for her performance as Kate in the Manhattan Theatre Club's 2000 off-Broadway production of Andrew Lippa's The Wild Party. Her other off-Broadway credits include the pre-Broadway run of Rent and The Vagina Monologues.

In 2003, Menzel starred with actress and singer Kristin Chenoweth on Broadway in Wicked, a musical by Stephen Schwartz and Winnie Holzman loosely based upon the popular 1995 Gregory Maguire novel. Menzel received the 2004 Tony Award for Best Leading Actress in a Musical for her portrayal of Elphaba, the Wicked Witch of the West. On her third-to-last performance of Wicked on January 8, 2005, she fell through a trap door and cracked a lower rib. The injury prevented her from performing in the January 9 show. Menzel did, however, make a special out-of-costume appearance at that performance, performed her final song, and received a 5 minute long standing ovation. Menzel was replaced by Elphaba standby Shoshana Bean.

Following Wicked, Menzel appeared off-Broadway in the Public Theater's production of See What I Wanna See, a Michael John LaChiusa-penned musical whose run ended in December 2005, for which she received Drama Desk Award and Drama League Award nominations. She reprised her Tony Award-winning role as Elphaba in the West End production of Wicked when it opened at London's Apollo Victoria Theater on September 7, 2006. During the run, she joined the ranks of highest paid female performer in the West End at $30,000 per week. Menzel finished her West End run on December 30, 2006. She was succeeded by Elphaba standby Kerry Ellis.

Menzel played the role of Florence in the 21st Anniversary concert of Chess at the Royal Albert Hall, London from May 12?13, 2008. Alongside Kerry Ellis, Adam Pascal and Josh Groban.

In 2008, Menzel headlined the Powerhouse Theatre's reading of Steven Sater and Duncan Sheik's musical Nero from July 11?1. She performed the role of Nero's mistress Poppea.

Menzel's film roles include appearances in Just a Kiss, Kissing Jessica Stein, Tollbooth, Water, Ask the Dust, Enchanted, and Rent, in which she and five other original cast members reprised their stage roles. As a singer Menzel is known for her wide vocal range, and her use of the 'belt' technique.

Menzel performed at the 1998 Lilith Fair summer concert festival and continues to write and perform original music. She has toured extensively and frequently performs in various venues throughout New York City. She produced and released her debut album, Still I Can't Be Still, for Hollywood Records in 1998. One single from the album, "Minuet," made the Radio & Records CHR/Pop Tracks chart at #48 in October 1998.

Her second album, Here, was released independently by Zel Records in 2004. Menzel has contributed to soundtracks, including those for the film The Other Sister and the ABC television dramedy Desperate Housewives. In 2007, she appeared on the Beowulf soundtrack singing the end credits song, "A Hero Comes Home". Also in 2007, Menzel's powerful singing voice lead her to be asked to accompany the baritone British X-Factor runner-up Rhydian Roberts on his debut album, duetting on the song "What if".

Her third solo album, I Stand, was released on January 29, 2008. The CD includes many new songs, including the lead single, "Brave," the title track "I Stand," and a song released on EP, "Gorgeous". The album debuted at #58 in the Billboard 200 making it the first solo album by Menzel to make the charts. There are five versions of this album: the original version, the special limited edition, the iTunes version, the Barnes & Noble edition, and the Borders edition.

On November 11, 2008, Menzel released a new single in conjunction with Major League Baseball. The single is entitled "Hope" and all proceeds go to Stand Up 2 Cancer.

On November 27, 2008, Menzel performed "I Stand" on the M&M Candies float as part of the Macy's Thanksgiving Day Parade.

When asked about 'Defying Gravity' being sung on Glee, Idina was asked about her musical future. She said that the movie version of 'Wicked' would probably not be around until a dip in its Broadway Box Office.

Idina also said that she had met with Andrew Lloyd Webber about taking the role of Betty Schaefer in his much delayed Sunset Boulevard film adaptation. As of February 2010, it is widely believed that Idina is no longer part of Sunset Boulevard as Idina wanted the role enlarged to the refusal of Lloyd-Webber.

On December 10, 2009, it was confirmed that Menzel is currently in negotiations to have a recurring role on Glee. In Spring 2010, Menzel began playing the role of Shelby Corcoran, the coach of the opposing Glee club, Vocal Adrenaline. She was also revealed as Rachel Berry's biological mother.

Menzel married actor Taye Diggs, her co-star from the original Broadway production of Rent, on January 11, 2003 after 7 years of dating. They have a Yorkshire Terrier named Sammy Davis Jr.[16] and two cats named Ella and Coltrane, whom they call their "Jazz Cats" because they were named after famous jazz performers. On December 6, 2004, it was reported by the New York Post that Menzel and Diggs were threatened with harm in a series of letters because of their interracial marriage. Their son, Walker Nathaniel Diggs, was born on September 2, 2009.

Christmas: A Season Of Love

Live: Barefoot At The Symphony