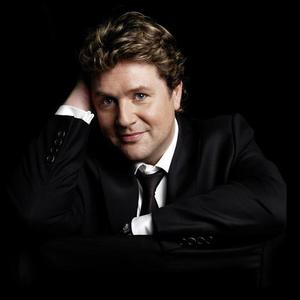 Michael Ball (born Michael Ashley Ball, on 27 June 1962 in Bromsgrove, England) is a British actor and singer, best known for musical theatre roles such as Marius in Les Mis?rables, Alex in Aspects of Love, and Caractacus Potts in Chitty Chitty Bang Bang.

Although born in England, Michael Ball is half Welsh, and says jokingly that he considers himself "Wenglish" and proud to be British [1]. He studied Drama at the Guildford School of Acting and graduated in 1984. His first major break was a star part in the production of The Pirates of Penzance at the Opera House, Manchester. Next came a brief stint in Rep. Cameron Mackintosh saw him and cast him as Marius in Les Mis?rables. Next came Raoul in the second casting of Phantom of the Opera, and Alex in Aspects of Love, both in London and on Broadway, and Giorgio in Stephen Sondheim's London production of Passion. Alone Together was Michael's one man show first performed at The Donmar Warehouse (which was reprised in 2004 for the Singular Sensations season at the Haymarket). In 2002 Michael took on the role of Caractacus Potts in Chitty Chitty Bang Bang which was largely considered his comeback role. In 2005, at 10 days' notice, he replaced Michael Crawford, who had to leave the show due to ill health, as Count Fosco in The Woman in White, and gave a popular and critically-acclaimed performance.

Other performances include singing at the BBC's St David's Day concert, at the Les Mis?rables Tenth Anniversary Concert in 1995, and the fiftieth birthday party of Andrew Lloyd Webber in 1998. He is a dramatic baritone known for his range, expression and power.

Michael is an accomplished concert artist and tours frequently around the UK. He has also performed concerts in Australia and America. Since reaching the top of the British charts with "Love Changes Everything" (from Aspects of Love) Michael had small successes with follow up singles but in the main he has concentrated on releasing albums, all of which achieved Gold status within weeks, and in the case of The Movies album in 1998, Platinium in 7 weeks{was released Oct 26th confirmed Platinium status in interview on 12 Dec}. Michael represented the UK in the Eurovision Song Contest 1992, singing the song "One Step Out of Time", which finished second.

Michael has also turned his hand to presenting both on TV and radio and has presented The National lottery, Children in Need and This Morning, and had his own series on TV and radio (Ball over Broadway on BBC Radio 2) (which is in its fourth season), The Greenroom, and several specials for BBC Radio 2 on subjects such as Nat King Cole, Cameron Mackintosh, and Cy Coleman.

In September 2005, Michael made his NYC Opera debut as Reginald Bunthorne in Gilbert and Sullivan's Patience with the New York City Opera.

In October 2005 Michael released his latest album "Music". The album went into the UK charts at number 11, and spent 10 weeks in the top 75. The album finished the year the 99th best selling album of 2005.

In November, 2005, Michael returned to Broadway as Count Fosco in The Woman in White, which transferred from London's West End. However, he was forced to leave the show due to a reported viral infection caused by the fat suit required for the role, which reportedly raised Ball's body temperature by several degrees during the show. The suit is also thought to have been the cause of Michael Crawford's premature departure from the show in London. The show closed early, in part due to the health problems of Ball and leading lady Maria Friedman.

Michael spent the first quarter of 2006 on complete vocal rest, following the illness that caused him the leave Woman In White on Broadway. By the middle of July, Michael had taken part in the Royals Court's celebratory performance of The Rocky Horror Show, recorded a new album (called "One Voice", due for release on 30 October 2006) and made a guest appearance on Julian Lloyd Webber's album "Unexpected song". Then came the summer concerts at Aberdeen, Bath, Southport, Oakley Hall and Cardiff. In August, Michael sat in for Michael Parkinson on his Radio 2 show. He was interviewed for Radio 3's "Stage and Screen" programme, and recorded a tribute to Anthony Newley at Hackney Empire, also for Radio 2. Michael then took part in 'Proms in the Park' in Singleton Park, Swansea. He sang two tracks from his forthcoming album, 'One Voice'; the title song and 'Hero'. Michael also sung show stoppers, 'This is the Moment', 'Anthem' and 'Love Changes Everything'. In November, Michael will be releasing a new DVD containing all the best songs from his 'Live in Concert' DVDs. They will be split into five sections: Musicals, Love Songs, Personal Favourites, Party Time and Unplugged. The DVD will also include a brand new "Unplugged" session which Michael has recorded with just 4 other musicians in the studio especially for this DVD. It will be released on November 20 2006. Six days later he will join Petula Clark in concert at the Theatre Royal Drury Lane in London. (In 2004, he co-starred with her in a production of Lloyd Webber's Sunset Boulevard at the Cork Opera House in the Republic of Ireland, which was later broadcast by the BBC. Michael has lots of promotional activities coming up at the end of the year with the release of his new album 'One Voice'.

It has been announced that Ball will be taking the lead role in Kismet in June/July 2007 for the ENOdetails can be found on the English National Opera website.There will also be a tour but exact dates are not known yet{Michael confirmed this during his Stage and screen interview}.

He is currently sitting in for Johnnie Walker on his Sunday afternoon BBC Radio 2 show.

We Are More Than One

Coming Home To You

If Everyone Was Listening…

Past And Present (The Very Best Of)

A Song for You Disc 3

A Song For You Disc 2