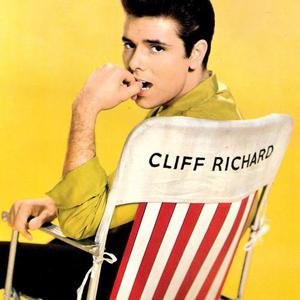 Sir Cliff Richard (born Harry Rodger Webb 14/10/40 in Lucknow, India) moved as an 8-year-old to the UK, where it would be 10 more years before he and his group The Drifters emerged in the UK charts for the first time with 'Move It'. Cliff was heavily influenced by Elvis, imitating him shamelessly during the first couple of years of his career. Something which he openly admits, and fully acknowledges that without Elvis, he and many others would never have happened.

'Move It' was a classic British Rock 'n' Roll song, peaked at number two, and was followed by a long string of hits like 'Living Doll' and 'Please Don't Tease'. By then The Drifters turned into The Shadows. After 'A Girl Like You' from 1961, the bond between Cliff and The Shadows loosened a bit, and solo singles of Cliff like 'When The Girl In Your Arms Is The Girl In Your Heart' started to appear alongside Cliff & The Shadows singles like 'Do You Wanna Dance'.

'Congratulations' was a global hit as it became a much bigger hit than 'La, La, La', which beat Cliff in the 1968 Eurovision song contest. Shortly after 'Congratulations', which was one of his solo efforts, Cliff recorded his last single with The Shadows. Again in 1973, with 'Power to All Our Friends', he entered the Eurovision song contest--this time reaching 3rd place.

The most sold artist in British Pop history - with over 40 top hits.

Worked with Stock Aitken Waterman in 1989 and the single "I Just Don't Have The Heart".

Sixty appearances at Wembley, plus sellout tour to celebrate 50 years in the business.

As big as he is in the UK, he has only had 3 Top 10 hits in the USA with the biggest still being his breakthrough 1976 single "Devil Woman" which made it all the way to #6.

Music... The Air That I Breathe

Move It (With The Shadows) CD3

Move It (With The Shadows) CD2