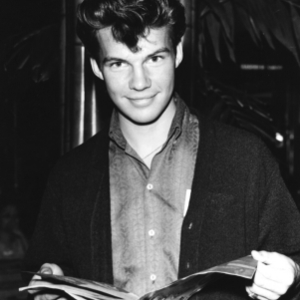 Bobby Vee (born April 30, 1943) is an American pop music singer. Born Robert Thomas Velline in Fargo, North Dakota, United States, his 1961 summer release Take Good Care Of My Baby went to No.1 on the Billboard U.S. and number 3 on the UK singles chart (according to EveryHit.com). Known primarily as a performer of Brill Building pop material, he went on to record a string of international hits in the 1960s, including Devil or Angel, Rubber Ball (1961), More Than I Can Say (1961), Run To Him (1961), The Night Has A Thousand Eyes (1963), and Come Back When You Grow Up.

When Vee recorded Come Back When You Grow Up in 1967, he was joined by a band called "'The Strangers'".

His first single was Suzie Baby, an original song penned by Vee which nodded towards Holly's Peggy Sue for the Minneapolis-based Soma Records in 1959; it drew enough attention and chart action to be purchased by Liberty Records, which signed him to their label in early 1960. His followup single, a cover of Adam Faith's UK Number 1 What Do You Want? charted in the lower reaches of Billboard in early 1960; however, it was his fourth recording, a revival of The Clovers' doo-wop ballad Devil or Angel, that brought him into the big time with US buyers. His follow-up single, Rubber Ball, was the record that made him an international star.
Vee was also a pioneer in the music video genre, appearing in several musical motion pictures as well as in the Scopitone series of early film-and-music jukebox recordings. He is a 1999 inductee of the North Dakota Roughrider Award.

Vee's career began amid tragedy. On "The Day the Music Died" (3 February 1959), the three headline acts in the lineup of the traveling "Winter Dance Party", Buddy Holly, Richie Valens, and J.P. "The Big Bopper" Richardson, were killed in the crash of aircraft N3974N near Clear Lake, Iowa while en route to the next show on the tour itenerary in Moorhead, Minnesota. Velline, then aged 15, and a hastily-assembled band of Fargo, North Dakota schoolboys calling themselves Bobby Vee and the Shadows volunteered for and were given the unenviable job of filling in for Holly and his band The Crickets at the Moorhead engagement. Their performance there was a success, setting in motion a chain of events that led to Vee's career as a popular singer.
Despite the circumstances of his debut, Vee went on to become a bona fide star, and regularly performs at the Winter Dance Party memorial concerts in Clear Lake to this day.