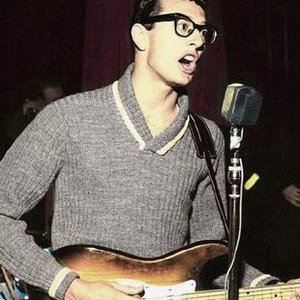 Charles Hardin Holley (born in Lubbock, Texas, USA on 7 September 1936 ? 3 February 1959) was an American singer-songwriter and a pioneer of rock and roll. The change of spelling of "Holley" to "Holly" came about because of an error in a contract he was asked to sign, listing him as Buddy Holly. That spelling was then adopted for his professional career. Although his success lasted only a year and a half before his death in an airplane crash, Holly is described by critic Bruce Eder as "the single most influential creative force in early rock and roll.

Although his success lasted only a year and a half before his death in an airplane crash, Holly is described by critic Bruce Eder as "the single most influential creative force in early rock and roll." His works and innovations were copied by his contemporaries and later musicians, notably The Beatles and The Rolling Stones, and exerted a profound influence on popular music. In 2004, Rolling Stone Magazine ranked Holly #13 on their list of the 100 Greatest Artists of All Time.

Biography
Charles Hardin Holley was born to Lawrence Odell Holley and Ella Pauline Drake. The Holleys were a musical family and as a young boy Holley learned to play piano, guitar, fiddle and the violin (his brothers oiled the strings so much that no one could hear him play). In 1949 Buddy cut a demo of Hank Snow's 'My Two-Timin' Woman' on a home tape recorder, his first known recording. During the fall of that year he met Bob Montgomery in Hutchinson Junior High School. They shared a common interest in music and soon teamed up as the duo "Buddy and Bob." Initially influenced by bluegrass music, they sang harmony duets at local clubs and high school talent shows. His musical interests grew throughout high school while singing in the Lubbock High School Choir.

Holly turned to rock music after seeing Elvis Presley sing live in Lubbock in early 1955. A few months later, he appeared on the same bill with Presley, also in Lubbock. Holly's transition to rock was finalized when he opened for Bill Haley & His Comets at a local rock show organized by Eddie Crandall, who was also the manager for Marty Robbins. As a result of this performance, Holly was offered a contract with Decca Records to work alone, which he accepted. According to the Amburn book (p. 45), his public name changed from "Holley" to "Holly" on February 8, 1956, when he signed the Decca contract. Among the tracks recorded for Decca was an early version of "That'll Be The Day", which took its title from a phrase that John Wayne's character said repeatedly in the 1956 film, The Searchers.


Buddy Holly statue on the Lubbock Walk of FameBack in Lubbock, Holly formed his own band, The Crickets and began making records at Norman Petty's studios in Clovis, New Mexico. Norman had music industry contacts and believing that "That'll Be the Day" would be a hit single, he contacted publishers and labels. Coral Records, a subsidiary of Decca, signed Buddy Holly and The Crickets. This put Holly in the unusual position of having two record contracts at the same time. Before "That'll Be The Day" had its nationwide release, Holly played lead guitar on the hit-single "Starlight", recorded in April, 1957, featuring Jack Huddle. The initial, unsuccessful version of "That'll Be The Day" played more slowly and about half an octave higher than the hit version.

Holly managed to bridge some of the racial divide that marked rock n' roll music. While Elvis made black music more acceptable to whites, Holly won over an all-black audience when the Crickets were accidentally booked at New York's Apollo Theater (though, unlike the immediate response depicted in the 1978 movie The Buddy Holly Story, it actually took several performances for his talents to be appreciated).

After the release of several highly successful songs, Holly and the Crickets toured the United Kingdom in 1958.

That same year, he met Maria Elena Santiago (born 1935 in San Juan, Puerto Rico) while she was working as a receptionist for Peer-Southern Music, a New York music publisher. He proposed to her on their very first date. She initially thought he was kidding, but they were married in Lubbock, Texas on August 15, 1958, less than two months after they met. Maria traveled on some of the tours, doing everything from the laundry to equipment set-up to ensuring the group got paid.

The ambitious Holly became increasingly interested in the New York music/recording/publishing scene, while his easygoing bandmates wanted to go back home to Lubbock. As a result, in 1959, the group split.

Death
Holly began a solo tour with other notable performers, including Dion DiMucci, Ritchie Valens, and J.P. "The Big Bopper" Richardson. One night after a performance in Green Bay, Wisconsin at the Riverside Ballroom, the three headliners gave a show at the Surf Ballroom in Clear Lake, Iowa on February 2, 1959. Afterwards, Buddy Holly chartered a Beechcraft Bonanza to take him and his new back-up band (Tommy Allsup and Waylon Jennings) to Fargo, North Dakota, enroute to play the next leg of the Winter Dance Party tour at the Armory in Moorhead, Minnesota. Carl Bunch missed the flight as he had been hospitalized with frostbite three days earlier. The Big Bopper asked Jennings for his spot on the four-seat plane, as he was recovering from the flu. Ritchie Valens was still signing autographs at the concert site when Allsup walked in and told him it was time to go. Allsup pulled a 50 cent coin out of his pocket and the two men flipped for the seat. Allsup lost.

The plane took off in light snow and gusty winds at around 12:55 A.M., but crashed after only a few minutes. The wreckage was discovered several hours later by the plane's owner, Jerry Dwyer, some 8 miles (13 km) from the airport on the property of Albert Juhl. The crash killed Holly, Valens, Richardson, and the 21-year-old pilot, Roger Peterson. Holly's body, along with those of Valens and Richardson, was thrown from the wreckage. Holly and Valens lay 17 feet (5.2 m) south of the wreckage and Richardson was thrown around 40 feet (12 m) to the north of the wreckage. The pilot's body remained in the wreckage. All had suffered severe and multiple injuries. Without any doubt, all had died on impact, with the plane hitting the ground at 170 mph (270 km/h). While theories abound as to the exact cause of the crash, an official determination of pilot error was rendered by the Civil Aeronautics Board. Although the crash received a good deal of local coverage, it was displaced in the national news by an accident that occurred the same day in New York City, when American Airlines Flight 320 crashed during an instrument landing approach at LaGuardia Airport, killing 65.

Holly's pregnant wife became a widow after barely six months of marriage and miscarried soon after.

Holly's funeral services were held at 2:00 p.m., Saturday, February 7, 1959 at the Tabernacle Baptist Church in Lubbock under the direction of Sanders Funeral Home. His body was interred in the City of Lubbock Cemetery in the eastern part of the city. Holly's headstone carries the correct spelling of his surname (Holley) and a carving of his Fender Stratocaster guitar.

Posthumous record releases
Buddy Holly's music did not die with him. He had recorded so prolifically that his record label was able to release brand-new Buddy Holly albums and singles for 10 years after his death. Holly's simple demonstration recordings were overdubbed by studio musicians, to bring them up to then-commercial standards. The best of these records is often considered to be the first posthumous single, the 1959 coupling of "Peggy Sue Got Married" and "Crying, Waiting, Hoping", produced by Jack Hansen, with added backing vocals by the Ray Charles Singers in simulation of an authentic Crickets record. "Crying, Waiting, Hoping" was actually supposed to be the "A" side of the 45, with the backup group effectively echoing Buddy's call-and-response vocal. The Hansen session, in which Holly's last six original compositions were overdubbed, was issued on the 1960 Coral LP The Buddy Holly Story, Vol. 2' '.

Buddy Holly continued to be promoted and sold as an ?active? artist, and his records had a loyal following, especially in Europe. The demand for unissued Holly material was so great that Norman Petty resorted to overdubbing whatever he could find: alternate takes of studio recordings, originally rejected masters, ?Crying, Waiting, Hoping? and the other five 1959 tracks (adding new surf-guitar arrangements), and even Holly's amateur demos from 1954 (where the low-fidelity vocals are often muffled behind the new orchestrations). The last new Buddy Holly album was Giant (featuring the single, ?Love Is Strange?), issued in 1969. Between the 1959-60 Jack Hansen overdubs, the 1960s Norman Petty overdubs, various alternate takes, and Holly's undubbed originals, collectors can often choose from multiple versions of the same song.

Style
Holly's music was sophisticated for its day, including the use of instruments considered novel for rock and roll, such as the celesta (heard on "Everyday"). Holly was an influential lead and rhythm guitarist, notably on songs such as "Peggy Sue" and "Not Fade Away". While Holly could pump out boy-loves-girl songs with the best of his contemporaries, other songs featured more sophisticated lyrics and more complex harmonies and melodies than had previously appeared in the genre.

Many of his songs feature a unique vocal "hiccup" technique, a glottal stop, to emphasize certain words in any given song, especially the rockers. Other singers (such as Elvis) have used a similar technique, though less obviously and consistently. Examples of this can be found at the start of the raucous "Rave On": "Weh-eh-ell, the little things you say and do, make me want to be with you-ou..."; in "That'll Be the Day": "Well, you give me all your lovin' and your -turtle dovin'..."; and in "Peggy Sue": "I love you Peggy Sue - with a love so rare and tr-ue ..."

Influence
Contrary to popular belief, teenagers John Lennon and Paul McCartney did not attend a Holly concert; Tony Bramwell, a school friend of McCartney and George Harrison, did. Bramwell met Holly, and freely shared his records with all three. Lennon and McCartney later cited Holly as a primary influence (Their band's name, The Beatles, was chosen partly in homage to Holly's Crickets.) The Beatles did a cover version of "Words of Love" that was a close reproduction of Holly's version. Fan McCartney owns the publishing rights to Holly's song catalogue.

A young Bob Dylan attended the January 31, 1959 show, two nights before Holly's death. Dylan referred to this in his 1998 Grammy acceptance speech for his 1997 Time out of Mind winning Album of the Year: "And I just want to say that when I was sixteen or seventeen years old, I went to see Buddy Holly play at Duluth National Guard Armory and I was three feet away from him...and he LOOKED at me. And I just have some sort of feeling that he was ? I don't know how or why ? but I know he was with us all the time we were making this record in some kind of way."

Various rock and roll histories have asserted that the singing group The Hollies were named in homage to Buddy Holly. According to the band's website, although the group admired Holly (and years later produced an album covering some of his songs), their name was inspired primarily by the sprigs of holly in evidence around Christmas of 1962. However, the site also admits to a degree of uncertainty about that story.

The Very Best Of (Amazon Edition)

Down The Line: Rarities CD2

Down The Line: Rarities CD1

Not Fade Away CD3

Not Fade Away CD2

Not Fade Away CD1

Not Fade Away CD6