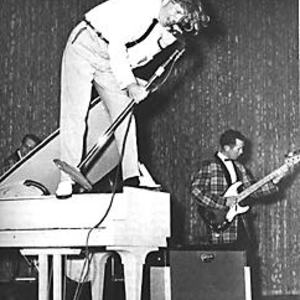 Jerry Lee Lewis (born September 29, 1935 in Ferriday, Louisiana, U.S.) is an American rock and roll and country music singer, songwriter, and pianist, as well as an early pioneer of rock and roll music. He was inducted into the Rock and Roll Hall of Fame in 1986 and his pioneering contribution to the genre has been recognized by the rockabilly Hall of Fame. His nickname is The Killer. Like Elvis Presley, he was raised singing the Christian gospel music of integrated southern Pentecostal churches.

Like Elvis Presley, he was raised singing the Christian gospel music of integrated southern Pentecostal churches. In 1950 he attended Southwestern Bible Institute in Texas but was expelled for misconduct, including playing rock and roll versions of hymns in church. Pearry Green (then president of the student body) related how during a talent show Jerry played some worldly music. The next morning the Dean of the school called both Jerry and Pearry into his office to expel them both. Jerry then said that Pearry shouldn't be expelled because "he didn't know what I was going to do." Years later Pearry asked Jerry: "Are you still playing the devil's music?" Jerry replied, "Yes, I am. But you know it's strange, the same music that they kicked me out of school for is the same kind of music they play in their churches today. The difference is, I know I am playing for the devil and they don't."

Leaving religious music behind, he became a part of the burgeoning new rock and roll sound, cutting his first record in 1954. Two years later, at Sun Records studio in Memphis, Tennessee, producer and engineer Jack Clement discovered and recorded Lewis for the Sun label, while owner Sam Phillips was away on a trip to Florida. As a result, Lewis joined Elvis Presley, Roy Orbison, Carl Perkins, and Johnny Cash as stars who began their recording careers at Sun Studios around this same time.


Lewis' first recording at Sun studios was his own distinct version of the country ballad Crazy Arms. In 1957, his piano and the pure rock and roll sound of Whole Lotta Shakin' Goin' On propelled him to international fame. Great Balls of Fire soon followed, and would become his biggest hit. Watching and listening to Jerry Lee Lewis, Elvis said if he could play the piano like that, he'd quit singing. Lewis' early billing was Jerry Lee Lewis and his Pumping Piano.

Lewis was a pioneer of piano rock, not only through his sound by also through his dynamic performance. He would often kick the piano bench out of the way to play standing, rake his hands up and down the keyboard for dramatic accent, and even sit down on it. His frenetic performance style can be seen in films such as High School Confidential (he sang the title song from the back of a flatbed truck), and Jamboree. These performance techniques have been adopted by recent piano rock artists, notably admirer Elton John. Jerry Lee is still around (2007) and recently recorded an album called 'Last Man Standing' with a host of todays top recording stars.