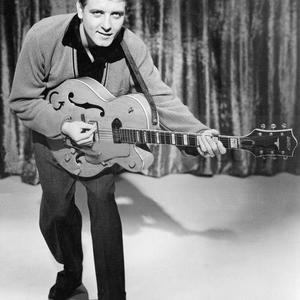 Eddie Cochran (October 3, 1938 - April 17, 1960) was an American rockabilly singer, songwriter and guitarist, considered one of the most influential musicians of the late '50s alongside Buddy Holly and Elvis Presley. A sharp-dressed, ruggedly handsome young man with a rebellious attitude and a raucous voice, Cochran epitomized the '50s rocker. Killed in a tragic accident at the age of 21, Cochran achieved timeless, iconic status.

Cochran's rough, bass-driven singles such as "C'mon Everybody", "Somethin' Else", and "Summertime Blues" have inspired some to call him the "Grandfather of punk rock."

Ray Edward Cochran was born in Albert Lea, Minnesota; however, as his parents were from Oklahoma, he considered himself an Oklahoman, and introduced himself as such in interviews. He took music lessons in school, but eventually quit the band to play drums. Rather than take piano lessons, Cochran began learning guitar, playing the country music he heard on the radio. As time went on, Cochran moved to Los Angeles, California in 1953. Together with Hank Cochran, Eddie formed The Cochran Brothers, though the two shared no relation.

Around the same time, Cochran worked as a session musician, but aspired to be a songwriter and artist in his own right, and recorded a demo with songwriting partner and future manager, Jerry Capeheart. Cochran's first notable foray into the public eye was as one of the many performing artists featured in the musical comedy film The Girl Can't Help It starring Jayne Mansfield, eventually resulting in a recording contract with Liberty. He would follow up on this appearance by appearing in several films of the same genre. He also performed as a support act for such stars as Gene Vincent and Little Richard, who were among Cochran's co-stars in the aforementioned film.

For his recordings, Cochran often used experimental techniques that would later become part and parcel for other recording artists, notably recording numerous overdubs in order to create the rich, distinctive guitar sound for "Summertime Blues" and "C'mon Everybody". "Twenty Flight Rock", the song Cochran performed in The Girl Can't Help It, was the very first song a young Paul McCartney played for John Lennon as his audition for Lennon's group, The Quarrymen, which would later metamorphose into The Beatles.

Cochran was killed in an automobile accident in Chippenham, Wiltshire, England during a tour of Britain with Gene Vincent. Vincent and Cochran's fiancee, who were both in the car, survived the crash. Scholars have noted that, somewhat eerily, Cochran's last single release in his lifetime was "Three Steps to Heaven", although the song's lyrical context has nothing to do with death. Cochran's death occurred little over a year after the plane crash that killed Buddy Holly, Ritchie Valens, and J.P. "The Big Bopper" Richardson, to whom he paid tribute in his recording of the song "Three Stars", which remained unreleased until 1966.

A majority of Cochran's recorded legacy would be released posthumously; in his lifetime, only one album, Singin' to My Baby, was ever released. Perhaps owing to the brevity of his life and career, Cochran never attained the same star status as other rockers of the era; however, his lyrical themes of teenage desires and rebellion, being somewhat more morose and raucous than his contemporaries, had a profound influence on many of the greatest artists of the '60s and '70s, such as The Beatles, The Who, and The Rolling Stones.

Somethin' Else: The Ultimate Collection CD8

Somethin' Else: The Ultimate Collection CD7

Somethin' Else: The Ultimate Collection CD6

Somethin' Else: The Ultimate Collection CD5

Somethin' Else: The Ultimate Collection CD4

Somethin' Else: The Ultimate Collection CD3

Somethin' Else: The Ultimate Collection CD2