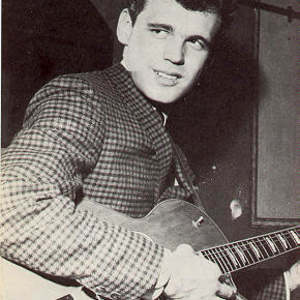 Duane Eddy born April 26th, 1938 in Corning, New York, began playing at age five, emulating his cowboy hero, Gene Autry. His family moved west to Phoenix, Arizona, in the early Fifties, where Duane met his longtime partner, co-writer and producer, Lee Hazlewood. Together, they created a successful formula based upon Duane's unique approach to the guitar, and Lee's experimental vision in the recording studio.

Eddy introduced a unique, twangy sound to Rock and Roll guitar. As John Fogerty wrote in Rolling Stone about his style; "It was one of those untouchable, unique things...Duane Eddy was the front guy, the first rock & roll guitar god." Combining strong, dramatic, single-note melodies, the bending of the low strings, and a combination of echo, vibrato bar (Bigsby), and tremolo, he produced a signature sound that was unlike anything yet heard - the sound that would be featured on an unprecedented string of thirty-four chart singles, fifteen of which made the top forty and sales of over 100 million worldwide. Later in his career, Eddy was interviewed by John Fogerty for Musician magazine about his style. Fogerty called it '"big" both in a sense of it being new and the actual sound quality itself. Eddy told Fogerty, "I knew we had to have something big... We did go for a big sound. I have to give a lot of credit to Lee Hazlewood. He mixed things for AM radio in those days so that they would come rockin out of the radio."

Elements of country, blues, jazz and Gospel infused his instrumentals. They had evocative titles like, Rebel Rouser, Forty Miles of Bad Road, Cannonball, The Lonely One, Shazam, and Some Kind-a Earthquake (which has the distinction of being the shortest song to break into the Top 40, clocking in at 1:17). They were filled with rebel yells and brilliant sax breaks. The worldwide popularity of these records, beginning with Moovin' and Groovin' in 1958, broke open the doors for Rock and Roll instrumental music. Dick Clark invited Eddy to appear on The Dick Clark Saturday Night Beechnut Show, where Duane introduced his next hit, Ramrod. By the following Tuesday there were orders for 250,000 copies and the legend was on his way, including numerous appearances on Clark's American Bandstand. His band, The Rebels, featured musicians who were to become some of the world's best-known session players. Sax players Steve Douglas and Jim Horn, and pianist Larry Knechtel, have been heard on hundreds of hit records, becoming members of the famous "Wrecking Crew" of Phil Spector in the 1960s, and touring with a very elite group of artists through the years.

January 9, 1959, Duane Eddy's debut album, "Have Twangy Guitar Will Travel ", is released. It is phenomenally successful, reaching #5 and remaining on the album charts for an unprecedented 82 weeks. The early 60's saw Eddy's greatest success. In 1960, The UK's "New Musical Express" voted him World's Number One Musical Personality, ousting Elvis Presley from his long held position. That same year, he recorded the theme for the movie Because They're Young, starring James Darren, Tuesday Weld, and Dick Clark. The song became Duane's biggest success, peaking at #4. Duane and Lee teamed up again in 1962 to produce Dance With The Guitar Man which reached number 12 on the US charts. Eddy constantly broke new ground, producing over 25 albums spanning a broad range of themes. At the height of the Rock and Roll era, he recorded an album of completely acoustic music, Songs Of Our Heritage, the first "unplugged" project, so to speak. There were orchestral projects, Big Band sounds of the 1940s, and an album of songs written by Bob Dylan, who, years later, would write in his biography, Chronicle, ?For sure my lyrics had struck nerves that had never been struck before, but if my songs were just about the words, then what was Duane Eddy, the great rock and roll guitarist, doing recording an album full of instrumental melodies of my songs?? During the 60's Eddy launched an acting career, starring in the movies A Thunder of Drums, The Wild Westerners, Kona Coast, The Savage Seven, and two appearances on the television series Have Gun ? Will Travel.

The 1970s were equally busy for Duane. He produced album projects for Phil Everly and Waylon Jennings. In 1975 a collaboration with hit songwriter Tony Macaulay led to a worldwide top ten record, Play Me Like You Play Your Guitar. The single record, You Are My Sunshine, featuring Willie Nelson and Waylon Jennings, hit the country charts in 1977.

An amazing group of legendary players hit the road in early 1983, showing up at small, intimate clubs. Friends of Duane's, some old, some new, had put this band together wanting to give the fans a chance to hear him in a unique setting - Don Randi on keyboards, Hal Blaine on drums, Steve Douglas on sax, and to Duane's pleasant surprise, Ry Cooder on guitar. Needless to say, this group rocked, and the lines around the block and the rave reviews said it all. Duane Eddy was back, and a whole new generation of fans was listening.

In 1986, Duane recorded with The Art of Noise, a collaboration that brought a new twist to his 1960 best seller, Peter Gunn. The song was an instant Top Ten hit around the world, ranking #1 on Rolling Stone Magazine's dance chart for six weeks that summer. As further confirmation of its success, Peter Gunn won The Grammy for Best Rock Instrumental of 1986. It gave him the distinction of being the only instrumentalist to have UK Top 10 hit singles in four different decades.

The following year, a new album, the self-titled, Duane Eddy, was released on Capitol. As a tribute to his influence and inspiration to so many young players, a crowd of unbelievable talent came along to be a part of this project. Tracks were produced by Paul McCartney, Jeff Lynne, Ry Cooder, Art of Noise, and Duane. The "band" included John Fogerty, George Harrison, Paul McCartney, Ry Cooder, James Burton, David Lindley, Steve Cropper, and original Rebels, Larry Knechtel and Jim Horn.

In the spring of 1994, Eddy's place in our musical history was etched in stone at his induction into the Rock and Roll Hall of Fame, alongside fellow artists Elton John, Rod Stewart, John Lennon, Bob Marley and The Grateful Dead. Later that year, film soundtracks introduced Duane Eddy's music to millions as they watched Forrest Gump being chased by a pickup truck full of rednecks, running into his football career to the sound of Rebel Rouser. Oliver Stone's Natural Born Killers used The Trembler, a track written by Duane and Ravi Shankar, to help create a spine-chilling scene set against a violent thunderstorm in the desert.

In more recent film work, Duane joined Academy Award winning composer Hans Zimmer on the soundtrack of Broken Arrow, starring John Travolta. Duane's unique guitar sound was first choice to be the ?voice? for the villain's theme. To quote Mr. Zimmer, "I always thought that Duane's style was being ripped off by the spaghetti westerns. This time I got the real thing". This dark and moody piece was also used as a recurring theme in Wes Craven's hit film, Scream 2.

2004 began on a high note with the introduction of the new Gibson Duane Eddy Signature Model guitar, built to Duane's specifications by the Gibson Custom Art and Historic Division. Later that year, he was presented with the Guitar Player Magazine "Legend Award, having the distinction of being only the second recipient, the first having been presented to Duane's own guitar hero, Les Paul.

Asked by Musician how he felt about influencing generations of musicians, Eddy commented that it "is an unexpected bonus. It makes me feel more important than I otherwise would. It's a confirmation, many years later, that it was the right thing. And we had no way of knowing at the time. We got confirmation in the fact that the records were hits. That's the first big joy. But after it dies down... Then suddenly somebody comes along and says, 'You started me in the business.'"

Playlist: The Best Of Duane Eddy

6 Classics Albums (The "Twangs" The "Thang", Plays Songs Of Our Heritage) CD2

6 Classic Albums (Have 'Twangy' Guitar Will Travel, Especially For You) CD1

Dance With The Guitar Man + Twangin' Up A Storm

Deep In The Heart Of Twangsville CD5

Deep In The Heart Of Twangsville CD4

Deep In The Heart Of Twangsville CD3