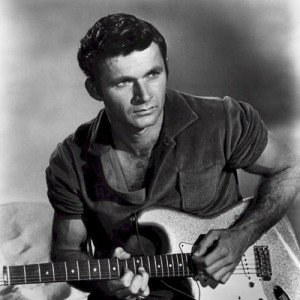 Dick Dale (born 4 May 1937 in Boston, Massachusetts) is an American guitarist and singer. Dale is revered as one of the pioneers of surf rock and one of the most influential guitarists of the early 1960s. His technique influenced future guitarists such as Jimi Hendrix and Eddie Van Halen. He experimented with reverberation and made use of custom-made Fender amplifiers. Among Dale's most well-known songs are "Misirlou", "Surf Beat", and "Let's Go Trippin'".

Born Richard Anthony Mansour to a Lebanese father and a Polish mother, he soon learned to play the drums, the ukulele, and finally the guitar. Among his early musical influences was his uncle, an oud player performing belly dance music. A plethora of Dale's early material contains middle eastern musical influences. Dale's professional career began in 1959, playing with his band The Del-Tones for surfers at the Rendezvous Ballroom in Balboa, California. With authorities concerned about the mix of young people and guitars, one of the requirements at the Ballroom was that every male patron wear a tie, so the audience was often made up of barefooted guys in surfer garb wearing ties that were handed out at the door.

Dale is often credited as one of the first electric guitarist to employ exotic scales in his playing. When Dale started surfing he became so fascinated that he began seeking ways of channeling the energy and power of the sport through his guitar playing. While he is primarily known for introducing the use of guitar reverberation, which has since become a staple of the surf sound, it was Dale's fast staccato picking that was his trademark. Due to his left-handedness, Dale was initially forced to play a right-handed model. However, he did so without restringing the guitar, leading him to effectively play the guitar upside-down (while Hendrix would restring his guitar). Even after he acquired a proper left-handed guitar, Dale continued to use his reverse stringing.

King Of The Surf Guitar: The Best Of Dick Dale & His Del-Tones

Rock Out With Dick Dale (Vinyl)