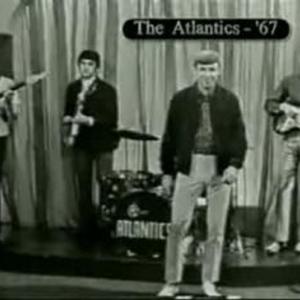 There are several bands that go by the name of The Atlantics. 1. The Atlantics were an Australian surf rock band in the early 1960s and arguably Australia's most successful of the genre. Most well-known for their classic hit, "Bombora", their later recordings such as "Come On" are examples of 1960s garage rock. They were the first Australian rock band to write their own hits. In 2000 the group reformed with three of the original members, and they are still actively releasing new material and performing live.

1. The Atlantics were an Australian surf rock band in the early 1960s and arguably Australia's most successful of the genre. Most well-known for their classic hit, "Bombora", their later recordings such as "Come On" are examples of 1960s garage rock. They were the first Australian rock band to write their own hits. In 2000 the group reformed with three of the original members, and they are still actively releasing new material and performing live.

2. The American powerpop band was formed in January 1976 by guitarist Tom Hauck and bass player Bruce Wilkinson, who were two students at Tufts University in Medford, Massachusetts, just outside Boston. Erik Lindgren, a mutual friend, introduced them to drummer Boby Bear and lead guitarist Jeff Lock. To complete the lineup Bruce recruited singer Bobby Marron, a friend from his hometown in New Jersey. The Atlantics played their first gigs in the spring of 1976 at The Rat in Kenmore Square and at a concert at Tufts University with Willy Alexander and Foxpass. In May of 1976 they scored the opening slot for the Ramones, who were playing two nights at The Club in Central Square. It was one of the Ramones' first Boston appearances, and the shows helped establish the Atlantics as one of the leaders of the emerging punk/new wave movement in Boston.

The band made their first trips to New York in the summer of 1976, playing at CBGB and Max's Kansas City. At Max's they met their first manager, Fred Munao. The following spring Ray Boy Fernandes replaced Boby Bear on drums. In the summer of 1977 the band recorded its first independent 45 on Jukebox Records, ?When You're Young? by B Wilkinson, backed with ?Where Would I Be Without Your Love,? by Jeff Lock. A thousand copies were pressed but never released, and the single is now considered a collector's item.

In the spring of 1978 Jeff Lock left the band and was replaced by Fred Pineau. Fred Munao got the band signed to ABC Records that summer, and in December the Atlantics recorded their album ?Big City Rock? at the Hit Factory in New York. Producer John Stronach vowed to make the band ?the Eagles of the new wave,? but even before the record was finished the group realized that their Los Angeles producer did not share the band's more contemporary East Coast viewpoint.

The record was ready in March, 1979, but a few weeks before the release ABC Records was unceremoniously sold to MCA Records. Consequently, some copies of ?Big City Rock? carried the ABC Records label, while later copies carried the MCA label. Their new label was notoriously adverse to punk and new wave, and made little effort to promote the group. The company, together with Premier Talent, put the Atlantics on tour with Roxy Music, but the record was not supported. The single ?One Last Night? by Bruce Wilkinson received limited airplay, and the album, despite a glowing review in Rolling Stone, did not sell. By July, 1979 the band was back in Boston. MCA had dropped them like a hot potato, and drummer Ray Boy Fernandes had left.

Later that summer Paul Caruso joined the group as drummer, and the band came back in 1980 with what was to become one of New England's biggest indy singles, ?Lonelyhearts,? by Tom Hauck, the flip side to ?Can't Wait Forever,? a Motown-flavored song by Bruce Wilkinson. ?Lonelyhearts,? a hard-driving dance tune, was originally the b-side because it was deemed by management to be too fast and too loud for mainstream radio. First played by Carter Alan on WBCN, ?Lonelyhearts? rocketed to the top of radio and dance charts and stayed for months, and can still be heard on Boston radio stations including WFNX over twenty years later. ?Lonelyhearts? had huge crossover appeal, and as a result the Atlantics appeared with such diverse artists as Prince (at the Metro in Boston on St. Patrick's Day, 1981), Foreigner (at the Cape Cod Coliseum), and Alice Cooper (at the Fitchburg Auditorium).

Unfortunately, the recording of ?Lonelyhearts? deepened the growing division between Fred Munao and the band, and just before the single was released the band split from Munao. The timing was not good, because the band lost momentum until they joined up with Steve Paul and Teddy Slatus, who managed Johnny Winter and David Johansen. During the next two years the Atlantics released a few more songs on tape to Boston radio stations, including ?Pop Shivers? and ?Weekend.? The latter became a staple on WBCN, being played dutifully every Friday at lunchtime by DJ Ken Shelton.

Despite the band's ferocious live show and extensive regional radio play, by 1983 they still had not gained acceptance from the mainstream music industry. In June 1983 the band played their final show at the Channel in Boston. Tom Hauck and Bruce Wilkinson went on to form Ball and Pivot, Bobby Marron did a stint in Cut 299, and Fred Pineau worked as a producer with singer John Warren, and has since continued to perform in Boston-area rock bands. Paul Caruso opened a CD production company, Boston Disc, and later became the studio head for Aerosmith's Joe Perry.

Bruce Wilkinson died in October, 2000 at his home in Florida. Paul Caruso passed away in May, 2006.

In September 2006 the surviving members (Fred Pineau, Tom Hauck and Bobby Marron) released ?ATLANTICS,? a 13-track CD of archival recordings dating from 1979 to 1982.

When the band broke up in 1983, these tapes?mostly cassettes with a few ?? safety masters?had been put into a storage for over 20 years. After Bruce Wilkinson died in 2000, Bobby, Tom, Paul and Fred got together and started planning a release. The band recovered the tapes, and Paul Caruso took the tapes for restoration and conversion to digital format. He produced 13 tracks at his studio in Kingston, and had just completed the job when he suddenly passed away in May, 2006.

The Best Of The Atlantics

Flight of the Surf Guitar