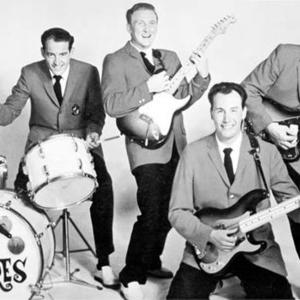 The Ventures are best remembered for a pair of Sixties smashes, ?Walk ? Don't Run? and ?Hawaii Five-O.? Yet their most impressive feat was charting 38 albums from 1960 to 1972. The Ventures' ?big guitar sound? made them an instrumental institution in the Sixties. Guitar Player magazine called them ?the quintessential guitar combo of the pre-Beatles era, [who] influenced not only styles, but also a generation's choice of instruments.?

The Ventures' nucleus came together in 1958, when Don Wilson and Bob Bogle met on a car lot in Tacoma, Washington. The two guitarists played as a duo before hooking up with guitarist/bassist Nokie Edwards and drummer Howie Johnson. They performed as the Impacts and the Versatones before settling on the Ventures. ?We were venturing into a different style of music, and the name would give us room to expand,? Wilson told journalist Robert J. Dalley. The Ventures self-released two singles on their Blue Horizon label, including ?Walk ? Don't Run,? released in 1960. When that song became popular on local radio stations, Seattle-based Dolton Records (a Liberty affiliate) signed the group and reissued the single. It became a #2 national hit, and an instrumental standard, selling 2 million copies. A new version, retitled ?Walk ? Don't Run '64 and done in a surf-guitar style, also made the Top Ten.

The Ventures kept abreast of the latest hits, cutting instrumental versions while they were still fresh in the public's mind. In addition, the Ventures routinely came up with unifying album concepts. Ventures in Space (1963) consisted of space-themed songs around the time NASA was firing up the public's imagination. Every song on The Colorful Ventures (1961) had a color in its title. Their collection of seasonal music, The Ventures' Christmas Album (1965), charted annually for four years.

The group ventured into any musical area that grabbed their fancy. They tapped into the surf-music craze with Surfing (1963). When rock went psychedelic, they cut a brace of albums - Guitar Freakout, Super Psychedelics, Flights of Fantasy and Underground Fire ? in that sonically expressive style. The Ventures even cut material exclusively for the Japanese market. The group became ambassadors of the electric guitar in Japan. Recalling their 1965 tour, Don Wilson told Goldmine, ?It seemed like every group in Japan knew only our songs. If a group played 100 songs, they were all Ventures songs.? The Ventures were eventually accorded the Grand Prix award for their contributions to Japanese music.

The Ventures' startling, horn-filled arrangement of the ?Hawaii Five-O? theme returned them to the Top Five in 1969. Although it was their last major hit, the group continued to chart albums through 1972's Joy/The Ventures Play the Classics. Even after dropping off the American charts, the Ventures maintained a flourishing career as touring and recording artists, and they remain especially popular in Europe and Japan - as well as among surf-music aficionados on the West Coast.

There have been relatively few personnel changes since the group's inception. Original drummer Howie Johnson broke his neck in a 1961 car accident and was unable to handle extensive touring. Mel Taylor replaced him in 1962. This cemented the classic Ventures lineup of Don Wilson, Bob Bogle, Nokie Edwards and Mel Taylor. In 1968 Edwards left to go solo and was replaced on lead guitar by Gerry McGee. Edwards returned to the fold in 1972 and remained until late 1984. Once again, he was replaced by McGee, who remains with the group and continues to tour with them in Japan. Bob Bogle retired from touring in December 2004 and was replaced by Bob Spalding.

February 10, 1933: Don Wilson, rhythm guitarist for the Ventures, is born in Tacoma, Washington.

September 24, 1933: Mel Taylor, drummer for the Ventures, is born in Brooklyn, New York.

January 16, 1934: Bob Bogle, guitarist and bass player for the Ventures, is born in Wagoner, Oklahoma.

May 9, 1935: Nole ?Nokie? Edwards, guitarist and bass player for the Ventures, is born in Lahoma, Oklahoma.

November 17, 1937: Gerry McGee, guitarist for the Ventures, is born in Eunice, Louisiana.

1962: Howie Johnson, original drummer with the Ventures, leaves after a neck injury makes touring too difficult. He is replaced by Mel Taylor

February 1963: The Ventures Play Telstar, The Lonely Bull and Others hits #8. It will be the highest-charting album of their career and the first of three gold albums.

June 1963: The Ventures release Surfing, an album that taps into the surf-music craze that the group's ?big-guitar sound? helped inspire.

March 1964: The Ventures in Space, a pioneering album in terms of exploring guitar sounds, peaks at #27.

August 7, 1965: Play Guitar With the Ventures enters Billboard's album chart, becoming the first music-instruction LP to do so.

1968: Guitarist Nokie Edwards takes a four-year hiatus from the Ventures, during which he is replaced by Gerry (a.k.a. Jerry) McGee.

December 1980: After nearly a decade's absence from American stages, the Ventures' play a well-received club date in Los Angeles, heralding renewed interest in their work.

1981: Guitarist Bob Spalding begins a longstanding connection with the Ventures, briefly replacing an ailing Nokie Edwards while also becoming a regular collaborator in the studio.

1985: Gerry McGee rejoins the Ventures as their permanent lead guitarist.

July 1, 1991: Walk ? Don't Run: The Best of the Ventures, a 29-track compilation, is released as part of Capitol's Legendary Masters Series.

August 11, 1996: Mel Taylor, the Ventures' drummer, dies of cardiac arrest while hospitalized for cancer. His son, Leon, replaces him in the group.

March 10, 2008: The Ventures are inducted into the Rock and Roll Hall of Fame at the 23rd annual induction dinner. John Fogerty is their presenter.

In The Vaults, Vol.4