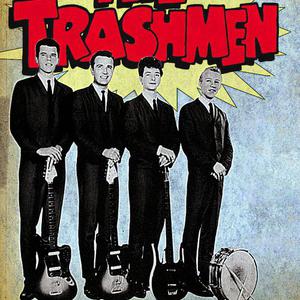 The Trashmen are a surf rock/rock and roll/garage rock band. They formed in Minneapolis, MN, USA in 1962. The lineup at that time was Tony Andreason: Lead guitarist and vocalist; Dal Winslow on rhythm guitar and vocals; Bob Reed, bass guitarist and vocals; and Steve Wahrer on drums and vocals. The group disbanded in 1967, reunited in the 1980's, and continued to play together until the untimely death of Steve Wahrer.

Some time after esophageal cancer claimed Steve in 1989, Tony Andreason's younger brother, Mark, took over as drummer for the group. In 2007, The Trashmen joined the revival movement of the popular groups of the 60's ?with the original members.

The Trashmen's major hit was 1963's ?Surfin' Bird,? which reached #1 coast to coast in the United States and in Canada. They were #1 in Caracas, Venezuela for 6 weeks and are still listed as the top rock band of all time in that country. In Sweden, ?Surfin' Bird? came out of its cage, flying up the record play list to #2 and to #5 in Australia. Mexico called it ?El Surf Del Pajaro por LosTrashmen" where it flapped its way to the top of the charts.

In the time period between JFK's assassination and the Beatles' appearance on the Ed Sullivan Show, The Trashmen ruled teenage America: ?Surfin' Bird? was THE soundtrack of 1964. The Trashmen are revered as the #1 garage band of all time and the all time cult rock band of the mid 60's. Garage rock is a raw form of rock and roll that enjoyed its original period of success in the U.S. and Canada from 1963 to 1967. In 1963, garage bands were all the products of local scenes such as The Kingsmen (Portland), Paul Revere and The Raiders (Boise), and The Trashmen (Minneapolis).

The Trashmen's ?Surfin' Bird? LP album is recognized by 60's collectors as the Holy Grail of garage rock. Their original Trashmen LP which originally sold for $2.88, as well as largely unavailable 45's, are selling today on ebay for stratospheric prices.

?Surfin' Bird? has been covered by many artists, including The Ramones, The Cramps, Sodom, and Pee-Wee Herman. The song has been featured in full feature movies such as Full Metal Jacket, Sleeper and Pink Flamingos. It has been heard on television commercials for Mervyns's, Reebok and as a ring tone on Sony's Erickson cellular phones. It has even been used in the soundtrack of the video game ?Battlefield Vietnam?! Their ?Bird Is The Word? was used on the popular TV series, ?Moonlighting?.

In the November 2006 issue of Rolling Stone Magazine, ?Weird Al? Yankovic said of Surfin' Bird, ?It's everything that's great about Rock And Roll distilled into one song.?

People who love those oldies will turn the volume as far to the right as it'll go when ?Surfin' Bird? comes out of a car radio from the local oldies station. Blasting: ?A-Well-A, Everybody's Heard About The Bird. B-B-B-Bird, Bird, Bird, B-Bird Is The Word.

Well, Everybody's Talking About The Bird!

There was also an episode of the popular american tv show, Family Guy in the recently released Season Eight.

Tube City - The Best Of The Trashmen