Sam The Sham & The Pharaohs 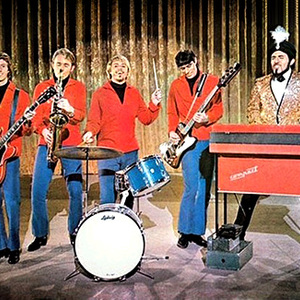 Sam the Sham is the stage name of rock 'n' roll singer Domingo ?Sam? Samudio from Dallas, Texas. Sam the Sham would later be known for his campy onstage attire of robe and turban (inspiring one of the great tribute album names, Norton Records' 1994 release Turban Renewal) and hauling his equipment around in a 1952, Packard hearse complete with maroon velvet curtains. Samudio made his singing debut while still in second grade, representing his school in a live radio broadcast. Later, he took up guitar and formed a high school group with some friends, one of whom was Trini Lopez.

Samudio made his singing debut while still in second grade, representing his school in a live radio broadcast. Later, he took up guitar and formed a high school group with some friends, one of whom was Trini Lopez.

He formed ?The Pharaohs? in 1961 in Dallas. The other members were Carl Medke, Russell Fowler, Omar "Big Man? Lopez and Vincent Lopez (not related to Omar). In 1962 the group made one record but it did not sell. Tired of playing for $5 per man per night, The Pharaohs disbanded in late 1962.

In June of 1963, ?The Nightriders? headed for Memphis, Tennessee and once again became a very popular house band at a club called The Diplomat. In late summer 1963, Andy Anderson and Vincent Lopez left the band to return to Texas. Sam and David A. Martin replaced them with Jerry Patterson and Ray Stinnett and changed the name of the band to ?Sam the Sham and The Pharaohs?. Shortly thereafter, the band added saxophonist, Butch Gibson.

After paying to record and press their own records to sell at their gigs, Sam the Sham and the Pharaohs wound up with the Pen label in Memphis. There, they recorded what would prove to be their first and biggest hit ever, "Wooly Bully". "Wooly Bully" was a worldwide sensation and sold 3 million copies, reaching No. 2 on the Billboard charts in the summer of 1965.

The lyrics of "Wooly Bully" were hard to understand, and some radio stations banned it. The song was originally called "Hully Gully". When told by the record company that they couldn't use that phrase, Sam changed the words to the name of cat - 'Wooly Bully'. It became the first American record to sell a million copies during the onslaught of the British Invasion, and was nominated for a Grammy Award.

Although the "Wooly Bully" single never reached #1 on the national charts, it had great "legs," lingering in the U.S. Top 40 for a then-impressive 18 weeks. It remains the only Billboard 'Record of the Year' not to have topped the Hot 100 chart.

The Pharoahs' next releases-- "Ju Ju Hand" and "Ring Dang Doo"-- were minor chart successes. In late 1965, 11 months after the release of "Wooly Bully", David Martin, Jerry Patterson, Ray Stinnett, and Butch Gibson left Sam over a financial dispute. Sam's business manager Leanord Stogal discovered a band called Tony Gee & The Gypsys playing at the Metropole Cafe in Times Square, New York City. The band personal were Tony "Butch" Gerace, bass/vocals, Frankie Carabetta sax, keys/vocals, Billy Bennett drums/vocals, and Andy Kuha guitar/vocals. It was this new set of Pharaohs that recorded "Lil' Red Riding Hood" which reached #1 at the top of the charts of Cashbox Magazine in the first week of August of 1966.

A series of mostly novelty tunes followed (all on the MGM label) and kept the group on the charts into 1967. The titles of these songs included "The Hair On My Chinny Chin Chin", "How Do You Catch A Girl", and "Oh That's Good, No, That's Bad". In 1967 3 girls joined the line up, Fran Curcio, Lorraine Genaro, and Jane Anderson. The new addition was called "The Shamettes". The group traveled to Asia as Sam the Sham & The Pharaohs and The Shamettes. In late 1967, Sam changed the name of the group to The Sam the Sham Revue. In 1970 Samudio went on his own and issued an album called Sam, Hard and Heavy on Atlantic. The album featured Duane Allman on guitar, the Dixie Flyers and the Memphis Horns. He formed a new band in 1974. The early 80s found Sam working with Ry Cooder on the soundtrack for the film The Border.

Sam continues to record, write, and do an occasional concert venue, while his adopted hometown of Memphis has adopted him an official ambassador of Memphis Rock and Roll.
Sam continues his motivational speaking events and will release a much anticipated book of poetry in early 2007. For more news about Sam, go to:
www.samthesham.com

Sam The Sham & The Pharaohs