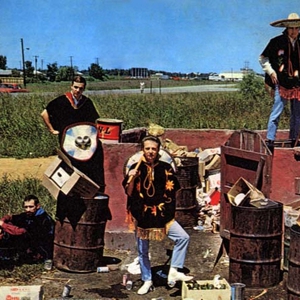 The Hombres were a garage rock band that had it's roots in the thriving memphis scene of the early 60's and who disbanded by 1969. Vocalist & organist B.B. Cunningham had earlier released some rockabilly sides on his fathers indie label Cover Records before being recruited to tour as a member of Ronny & The Daytonas with some Memphis High classmates. Originally the Bandits formed circa 1964 with Gary Wayne McEwen on guitar, B.B. Cunningham(d. 2012) on the organ (brother of Bill Cunningham of The Box Tops), Jerry Lee Masters on bass and John Will Hunter (d.

1976) on the drums. The band spent a couple years playing under the Ronny & The Daytonas name as the leader of that million selling Nashville based surf rock act didn't like touring.

The band's claim to fame is the Huey P. Meaux produced track Let It All Hang Out, which took it's inspiration from Bob Dylan's "Subterranean Homesick Blues" and an old country western 78. The origin of the comically bizarre lyrics in the song are presumably from the songwriters, but the spoken-word introduction ? "A preachment, dear friend, you are about to receive on John Barleycorn, Nicotine and the Temptations of Eve" ? goes all the way back to 1947, when they served to introduce a song that was every bit as strange for its era as this one was in 1967: "Cigarettes, Whiskey and Wild Wild Women" by Red Ingle and his Natural Seven.

The Hombres' "Let It All Hang Out" hit number 12 nationally in 1967, and decades later was included on the soundtrack of the Cameron Crowe film, Elizabethtown, the hit TV show, Cold Case, and has also been used in an advertising campaign for Foster's brand beer and for a tv commercial of a Dutch Bank. It has been sampled by UK hip-hop act Definition of Sound for their 1991 hit Wear Your Love Like Heaven and more recently covered by David Lee Roth for his 2007 album DLR World.

B.B. Cunningham, after working session work with the likes of Lou Rawls and Billy Joel, joined the touring band of Jerry Lee Lewis in 1997, of which he remained a member until his death. Working part-time as a security guard at age 70, Cunningham was tragically shot and killed on the job in Memphis in October 2012.

Jerry Masters continued his music career after his time in The Hombres, eventually becoming a prolific studio engineer in the early 1970's at Fame Studios, and mostly Muscle Shoals Sound Studio, 3614 Jackson Highway in Sheffield Alabama. The legendary Sam Phillips of Sun Records had called Masters "the best goddamn mixing engineer in the world."

Let It Out (Let It All Hang Out) (Vinyl)