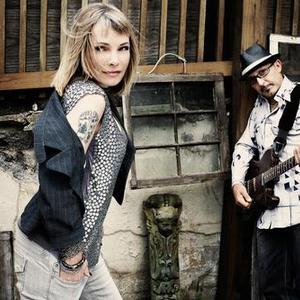 Marrying the vibey, seductively ethereal textures of lounge, dub and trance with the timeless verities of great pop and rock songwriting, Astronauts of Antiquity have bridged various musical worlds to create a realm all their own. And while their journey has taken them around the globe, on their new album, Rocket Science For Dummies, they have brought it all back home, delivering an album that is seamless and mesmerizing, reflecting a unified expression of their musical vision.

Their music has been called everything from ?urban-electro-organica,? to a ?jazzy, neo-soulful, electronic exploration,? but more than any genre, what defines Astronauts of Antiquity is the musical and life partnership of India on vocals and B. Rhyan on guitars. The two first ran into each other ? literally ? at the airport, while India was rushing to make a flight. Three years later, the two once again encountered at one of India's performances in Milwaukee. Backstage after her show, B. Rhyan was instantly captivated by India and sensed something more than simply a kindred spirit ? he saw the possibility of a music and soul partner. (Only years later did the two recall their original chance encounter, which made their meeting feel even more like destiny.)

Originally an alternative rock act, India, and B. Rhyan birthed what would become Astronauts of Antiquity at of all places, a festival they were playing in Poland. India recalls, ?We were an alt/rock band, but the last song we did was a dub influenced song, and the people went crazy. I think we were all like, ?Holy Shit, we're on to something here!'? Stints in Los Angeles, Detroit (where they won the Motor City Music Awards for best band, best female vocalist and best songwriters), New York, Dublin, London and Chapel Hill followed (and even a pilgrimage to India) as the band grew in stature and skill.

They earned laudatory reviews in such publications as Time Out London, who wrote, ?Astronauts of Antiquity superbly deliver exquisite vocals and compelling grooves that always rock the house.? The Spectator in Raleigh, NC who opined, ?Astronauts of Antiquity are a very savvy pop band in disguise. They offer up the ancient on a modern platter of undeniable tunes, catchy yet subtle like the muse.? URB from London chimed ?AOA is transcendent, yet funky?.open your mind, you won't be disappointed!?

After releasing their debut album, AOA 1 in 2005, and building a following in the Chapel Hill, NC area, where they played as a seven piece, earning comparisons to such acts as Thievery Corporation, Zero 7, Bebel Giberto and Radiohead, India and B. Rhyan headed back to the New York City area, settling in the bucolic town of Nyack, NY. Beginning work on a new album, B. Rhyan gave AOA keyboardist Taylor Ryan an opportunity to try his hand at production. He recalls, ?Taylor gave me a vision of a song ? and it was so detailed, it was like a movie. India and I were touched by his attention to detail. And his musicality is so varied and deep that it's complemented our own eclecticism perfectly.?

Eclecticism conveys a part of what Rocket Science For Dummies is. But it's more than that ? it's the rarely successful marriage between club and lounge music ? dub, trance, electronica, jazzy neo-soul ? and great, unforgettable pop songwriting. You can hear it from the first notes of the album opener, ?Everywhere,? with it's luscious, loungy vibe and India's powerful yet subtle vocals enveloping the track. It's present in ?Beautiful Fate,? where India's smoky, seductive vocals mingle with emotionally affecting lyrics and a hypnotic melody and rhythm track that brings to mind Kid A-era Radiohead.

?Miss Caroline? is one of those perfect ballads that encapsulate AoA so definitively. An ode to the beauty of their former home in North Carolina, it serves as both a tribute and a love letter, with India sounding like the coolest jazz singer on the planet. Add B. Rhyan's sublime guitar flourishes and a brilliant arrangement, it is nothing less than three plus minutes of musical nirvana. Again, it's all about the quality of the songs, something that India and B. Rhyan were attuned to during the songwriting process. As B. Rhyan relates, ?We've listened to a lot of things like Buddha Bar, and we love the vibe, but that music can get bland after a while. We wanted to have that vibe, but have it be emotive, where the song becomes most prominent.?

That goal is something that Astronauts of Antiquity have accomplished beautifully on Rocket Science For Dummies. And new album in tow, they are planning big things around the album, including a possible tour with Digable Planets (whose group member C-Knowledge appears on ?Soup de Jour?), gigs in the New York City area, and a full-scale DIY campaign that befits this uniquely gifted band that marries song and vibe like very few do.