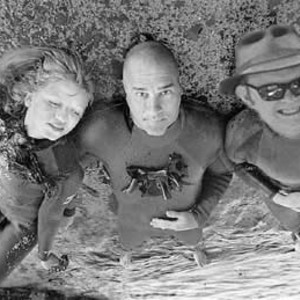 The Mermen are an influential psychedelic surf band from San Francisco, California. One of the odder and more wonderful bands to emerge from the surf music revival, the Mermen race between high-octane surf anthems and spaced-out blasts of psychedelia. Neither their albums nor their live shows follow any sort of expected or ordinary path, and the band has made many sincere attempts to get away from the surf music label.

Based in San Francisco, the band has developed a broad cult following, encourages tapers, and has developed a strong relationship with radio, resulting in numerous radio broadcasts, some of which were compiled for The Mermen Live at the Haunted House (1994).

The Mermen came together almost by accident in 1989, when guitarist Thomas was 35. He was working in a San Francisco music store and experimenting with demo recording equipment, although he didn't really consider himself a musician and had never played in a band. Before long he was joined by bassist Allan Whitman and drummer Martyn Jones, neither of whom fit any kind of pre-determined image of surf musicians (both men, like Thomas, were in their mid-30s), helping to propel the band away from its surf guitar roots, despite the first album, Krill Slippin' (1989, CD reissue in 1995), being essentially a pastiche of surf music to that date.

Their next album, Food for Other Fish (1994), saw a dramatic shift in the overall Mermen sound, as Thomas allowed himself free reign to improvise and try a variety of different sounds and techniques, aided by a huge rack of effects boxes and a floor full of effects pedals. The wall of sound generated by Thomas, combined with the distinctive work of Whitman and Jones, brought about comparisons with Sonic Youth alongside those to Dick Dale. Both of these descriptions are effectively limiting, however, as the Mermen sound does a good job of defying description -- while the band can do the surf music sound as well as anyone, they are even more adept at pushing into sometimes experimental spaces that take in everyone from John Coltrane to Pink Floyd.

Their following continued to grow in the year between the release of Food for Other Fish and the original 1995 release of A Glorious Lethal Euphoria, a 72-minute tour de force originally released by Toadaphile Records. The album drew widespread attention, selling out its first runs. The activity drew the attention of Mesa/Bluemoon Records, a division of Atlantic, who proceeded to sign the band, releasing a revised version of A Glorious Lethal Euphoria later in 1995. An EP, Songs of the Cows, recorded in three days in the midst of a tour was released in 1996. Besides the "official" CD releases, the Mermen have also released a number of limited-edition cassettes featuring early, live, and radio station performances, as well as The Mermen Sing Merry Christmas to You. Taking some time to craft the official follow-up to A Glorious Lethal Euphoria, the Mermen finally returned in 2000 with the full-length The Amazing California Health and Happiness Road Show. ~ Steven McDonald, All Music Guide

We Could See It In The Distance

Do You Hear What I Hear (A Very Mermen Christmas)

In God We Trust

Songs Of The Cows