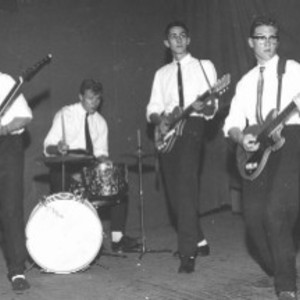 1. Astronauts was an experimental indie rock band from the Hudson Valley of NY. Astronauts consisted of 4 friends and the desire to create. 2 CDs and a demo were recorded ('Wizards', 'Avanti', and 'Deep Vermont') under the original line up consisting of Chris Bigley, Corey Burleigh, Simon Hegarty, and Steven Markota. Under the stress of juggling school and touring, Corey and Chris parted ways with Astronauts.

Needing a guitar player and a singer, Steven and Simon found Mike Tash and Jacob Kolbinski to play. A 2 song demo was recorded, entitled "Boneshaker". The new line up of Astronauts played many shows but the original fire was not there. Astronauts soon fizzled out and new bands were started.

3. Astronauts is a common misspelling of the surf band "The Astronauts" from the sixties.

In Defense Of Compassion

It's All Done By Mirrors