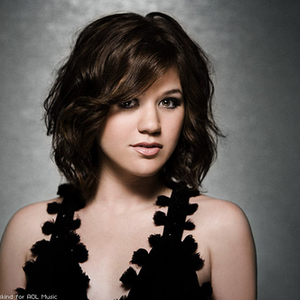 Kelly Brianne Clarkson (born April 24, 1982 in Fort Worth, TX) is a Grammy-winning American singer-songwriter and occasional actress. Clarkson recorded her debut album with RCA Records after having won the highly-publicized first season of the television series American Idol in 2002. Though originally marketed as a pop musician, she eventually developed a more rock-oriented image. Her debut album, Thankful, was released in 2003 and debuted at #1 on the Billboard 200 with almost 300,000 copies sold in its first week.

Though originally marketed as a pop musician, she eventually developed a more rock-oriented image. Her debut album, Thankful, was released in 2003 and debuted at #1 on the Billboard 200 with almost 300,000 copies sold in its first week. Her first single, A Moment Like This, broke the record for largest leap to #1, shooting from #52 to #1, where it remained for two weeks. The second single, Miss Independent, was also a success, hitting #1 on the US Top 40 Mainstream chart and remaining there for six weeks. Further singles Low and The Trouble With Love Is were released but failed to mimic the success of her previous songs. However, Low managed to become a hit in Canada and reached #2. To date, Thankful has been certified 2x Platinum in the United States, Platinum in Canada and Gold in Australia.

Clarkson's third album, entitled My December, was released in 2007. It peaked at #2 on the US and UK album charts. Her first single, Never Again, was released worldwide and reached #8 on the Billboard Hot 100 and #9 on the UK singles chart. She then released Sober in America, which did not perform as well on the charts as Never Again, peaking at #10 on the Billboard Bubbling Under Hot 100. One Minute was subsequently released in Australia, peaking at #36 on the Australian singles chart. Don&rsquo;t Waste Your Time followed, peaking at #14 on the Australian singles chart. The album's somewhat disappointing performance may be attributed to ongoing negative press and poor publicity. Nonetheless, My December has been certified Platinum in the US, Australia and Canada, and Gold in the UK and Ireland.

Clarkson's fourth album titled All I Ever Wanted was released in early 2009. Debuting at #1, it received favourable reviews from critics worldwide. The lead single, My Life Would Suck Without You, advanced from #97 to #1 on the Billboard Hot 100 in its first week of release, breaking the record for the largest leap to the position in chart history. This marks the second time Clarkson has broken that record, the first time being with her single A Moment Like This. My Life Would Suck Without You also reached #1 in the UK charts, making it her first #1 there. She subsequently became the only Idol winner to have acheived a #1 single there to date. Her second single from the album, I Do Not Hook Up, peaked at #20 on the Billboard Hot 100 and #36 on the UK singles chart. The third single from the album, Already Gone, was released on August 11, 2009 in America and the 21st in Australia. It has so far peaked at #12 in Australia, #15 in Canada, #23 in New Zealand, #66 in the UK, #13 on the Billboard Hot 100 and spent 8 weeks at #1 on the Billboard Hot Adult Contemporary songs chart. All I Ever Wanted was announced as the fourth single from the album and was released on March 9, 2010. All I Ever Wanted has charted at #1 in the US, #2 in Australia and Canada, #3 in the UK and #6 in New Zealand, selling over 1.2 million copies worldwide so far. The album received a 2010 Grammy nomination for "Best Pop Vocal Album."

Mr. Know It All, the first single from Clarkson's fifth album Stronger, debuted on August 30, 2011 during a live webcast hosted by the singer. The song was sent to radio for adds immediately after and was made available for download on September 5, 2011. It has since peaked in the top 20 of singles charts worldwide, including a #1 peak in South Korea, #1 in Australia, #4 in the UK, and #10 in the US, thus becoming her ninth top ten hit overall in the US. Stronger was released worldwide on October 24, 2011, charting at #2 in the US, #5 in the UK, #3 in Australia, and #4 in Canada. Stronger is her fifth consecutive album to debut within the top 3 in the US and has sold over a million copies worldwide since its release. Stronger (What Doesn't Kill You) was released in early 2012 to massive success; it became Clarkson's third #1 and tenth top-ten hit overall in the US, and likewise peaked in the top ten of countries worldwide. Stronger (What Doesn't Kill You) has since become Clarkson's biggest radio hit to date in the US and even topped the Billboard Dance charts, making Clarkson the only artist in history to have a #1 on Hot 100, Pop, Country, HAC, AC & Dance charts. Dark Side has since been announced and released as the album's third single worldwide.

Clarkson has had ten of her singles become top ten hits on the Billboard Hot 100. As of 2008 she is one of the 10 most played artists on adult contemporary radio. According to Sony Music, Clarkson has sold over 10.2 million albums in the United States and over 25 million albums worldwide, the highest out of all current American Idol alumni. She is also ranked on the top 200 album sellers of the Nielsen SoundScan era list at #187 and was named "voice of the century" by Esquire magazine.

When Christmas Comes Around...

Under The Mistletoe (With Brett Eldredge) (CDS)

I Dare You (Multi-Language Duets)

Broken & Beautiful (From The Movie Uglydolls)