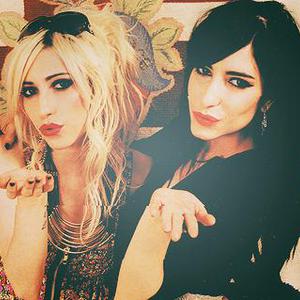 The Veronicas is a band consisting of identical twin sisters Jessica Louise Origliasso and Lisa Marie Origliasso (born December 25, 1984 in Brisbane, Australia). Speaking with Songfacts in a 2011 interview, Jess Origliasso explained that in 2001 she and her sister moved to Los Angeles, California, United States: ?We call it our temporary home. We're children of the universe, our real home is definitely Australia. We both have homes back in Australia. But as far as where we've spent the majority of our growing-up time for the last 7 years, it's been Los Angeles.?

Contrary to popular belief, the band name in fact did not come from a character in Archie Comics. In an interview with MTV, the sisters explicitly stated this about the band name:
"The name is something we thought about for a long time, and we wanted it to be a girl's name, but we didn't want it to be 'the Jesses. We were very conscious of not wanting to make it a twin thing, because we think that's really tacky. So one day we saw the movie 'Heathers,' and there's a line where one girl asks, 'Are you a Heather?' and Winona Ryder's character answers, 'No, I'm a Veronica,' and so we went with that, because she was this kind of cool, unique chick with an attitude."

Born to Italian (Sicilian) parents on Christmas Day 1984, they grew up in Albany Creek, (northwest of Brisbane, Australia) where they attended Ferny Grove State High School and Wavell State High School. At an early age the girls expressed interest in performing; they participated with small local papers in shows on television, radio and horses.

The girls were picked up by Warner Bros. Records/Reprise Records' Sire Records label in 2004, for a reported sum of 2 million dollars. The girls write their own songs, and have also written songs for other artists like t.A.T.u.'s "All About Us" and Australian Idol winners Casey Donovan's "What's Going On" & Kate DeAraugo's "Faded".

The Veronicas dislike being called a female duo. "We like being called a band or group. We don't want to be a pop duo group with two girls singing about relationships, we have everything that a rock band would have, so we are a band," says Lisa. The rest of the band consists of:

The Veronicas debut album, entitled "The Secret Life of...", was released in Australia on October 17, 2005, entering the ARIA Album charts at the position of #7. Since then, it has peaked at #2 and gone 4x Platinum. Due to the success of the album, five singles have been released in Australia.

The band's lead single "Hook Me Up" from their second album was added to Australian radio on August 27, 2007. "Hook Me Up" was produced by Greg Wells (Timbaland, Mika, OneRepublic). The Veronicas' second album, also titled "Hook Me Up", was released on November 3, 2007, containing 12 tracks. The album in its entirety was leaked on the internet 8 days before its initial release. "Untouched" is the second single off the album, and was made available in stores and online on December 8, 2007.

Jess is currently dating Azaria from Sydney band The Follow, but has been spotted kissing with MTV VJ Ruby Rose, although it is reported that it was only a stunt.

Think Of Me (CDS)

On Your Side (CDS)

In My Blood (CDS)

You Ruin Me (CDS)