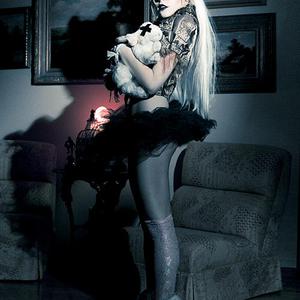 Kerli K?iv (born February 7, 1987), known simply as Kerli, is an Estonian singer-songwriter. In 2002, she began competing in numerous singing competitions and winning most of them. She later moved to the United States where she was signed to Island Records by L.A. Reid. There, she worked with David Maurice on numerous songs, three of which were released on her EP Kerli. Her debut studio album Love Is Dead was released in 2008.

In 2010, she appeared on the album Almost Alice with the song Tea Party and Strange, the latter being a duet with Tokio Hotel. She is currently working on her new album which she expects to release in early 2011 although she expects the first single from the album to be released before 2011 and after a promotional single.

Her sister, Eliisa K&otilde;iv, is also a musician, as is her best friend Vespertine.