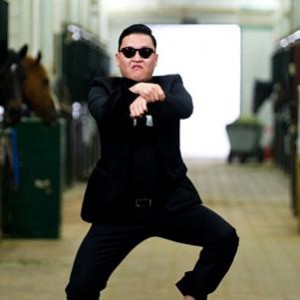 There are at least two artists who use this name 1. A musician from South Korea 2. A musician from England 1) A romanisation of ?? (Hangul, often stylized as PSY), a pseudonym of WrPark Jae-sang (Hangul: ???; born December 31, 1977) is a South Korean singer-songwriter, model, rapper, dance musician and record producer. He is popular for his humorous videos and stage performances, and has appeared on numerous television programs, including The Ellen Degeneres Show, Extra, Good Sunday: X-Man, The Golden Fishery, The Today Show and Saturday Night Live.

1) A romanisation of ?? (Hangul, often stylized as PSY), a pseudonym of WrPark Jae-sang (Hangul: ???; born December 31, 1977) is a South Korean singer-songwriter, model, rapper, dance musician and record producer. He is popular for his humorous videos and stage performances, and has appeared on numerous television programs, including The Ellen Degeneres Show, Extra, Good Sunday: X-Man, The Golden Fishery, The Today Show and Saturday Night Live.

His "Gangnam Style" music video is the most viewed K-pop video on YouTube, and also the most "liked" video on the site. Published on July 15th 2012, it continues to grow rapidly with the video having over 285 million views, and more than 2.8 million "likes," as of September 26, 2012. The Gangnam Style Songfacts states that following the initial success of the song in the US, Justin Bieber's manager Scooter Braun signed PSY to his Schoolboy Records label. Braun announced: "We've come to an agreement to make some history together and be the first Korean artist to break a big record in the United States."

Park was born in South Korea on December 31, 1977 and later attended Banpo (??) Elementary School, Banpo Middle School, and Sehwa (??) High School. Park went on to attend both Boston University and Berklee College of Music. He describes himself as not following the K-pop mold.

Psy debuted in January 2001 with his full-length album titled PSY... From the Psycho World!, for which he later had to pay a fine due to accusations that the album contained "inappropriate content". He was a rookie hip-hop singer that stirred up the Korean pop music scene with very blunt lyrics, peculiar dance moves and an unconventional appearance. Because of his unique style he was nicknamed the 'Bizarre Singer'.

He released his second album titled Ssa 2 in the following year. However, the release sparked complaints from various civic groups about the potentially negative influence his album would have on the younger generation. Since then, Psy has been thought of as a controversial artist, and Ssa 2 was banned in 2002 from being sold to those under the age of 19. Later in September, Psy released his third album 3 PSY through releasing his music on the Internet. The album's title song, "Champion", saw great success partly due to the hype from the World Cup games held in Seoul.

When his agency began to struggle financially, Psy's wife encouraged him to join YG.[8] Psy eventually switched entertainment agencies in 2010 to YG Entertainment where CEO Yang Hyun-suk expressed his old time ties with the singer. Psy made his comeback in October 2010 amidst the idol craze. However, he had embraced the fact that he was nowhere close to idol status.

In 2012, he released his 6th album PSY's Best 6th Part 1 and the title song "Gangnam Style" met huge international success. The choreography for "Gangnam Style" was highlighted in international news and became a viral hit. On August 14, "Gangnam Style" ranked first on YouTube's 'Most Viewed Videos' monthly chart; it has received over 283 million views on YouTube. On August 21, 2012, Gangnam Style officially charted #1 on the iTunes Music Video Charts, overtaking Justin Bieber's "As Long as You Love Me" and Katy Perry's "Wide Awake"; this feat is the first for any South Korean artist. On August 2, 2012, Psy was shown on CNN for the first time in the USA. On September 11, he appeared on The Ellen DeGeneres Show and taught the dance to Britney Spears. On September 14, 2012, he appeared on The Today Show on NBC in New York, performing the song live and teaching dance moves to the anchors. The following day, he also made a cameo appearance on Saturday Night Live during a skit featuring "Gangnam Style."

"When I realized that some top stars like have imagined or tweeted about me, I thought, 'That's joking. That's not gonna happen...' I never expect things like this, not because they are top stars, but because this is the biggest market in the universe for pop music, right, so everybody's dreaming about having appearance in the U.S. so I'm still saying, "What going on here? This is beautiful."

Riding high on the success of "Gangnam Style", Psy was signed by Scooter Braun to Braun's Schoolboy Records, a label distributed by Universal Republic.

Psy has also written many hit songs of varying genres for different singers. His most famous composition perhaps is Lee Seung Ki's debut song "Because You Are My Woman".

Psy gained many fans with his style of music, while his satirical slant has further driven his popularity. He is especially popular for his sense of humor and his unique concerts in which he imitates female singers such as Park Ji Yoon and Lee Hyori. Starting out with "Bird", the title song of his first album, Psy showed off his own style, fashion and confidence. He broke down the stereotype among K-pop music lovers that male singers can not enjoy the same success as female artists in Western Markets.

Park served his mandatory military service from 2003 to 2005. On October 14, 2006, Psy married Yoo Hye Yeon (his girlfriend for three and half years). After evidence came to light that suggested Psy didn't properly serve his full term of service, he was re-drafted to serve a second term in August 2007. After being released the summer of 2009, Psy voiced how he had learned a lot through his experience. He said he also felt the weight of his responsibility to his wife and twin daughters who were born two months before he started his second term.

2) A solo acoustic artist based in the north east of England.