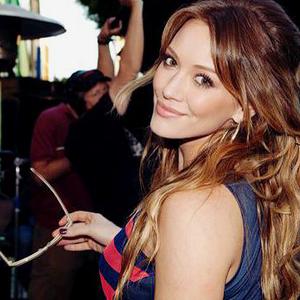 Hilary Erhard Duff (born September 28, 1987 in Houston, Texas, United States) is an American actress, singer, songwriter, fashion designer, film producer, spokesperson, and model signed to IMG Models New York. After gaining fame for her starring role on the television show Lizzie McGuire, she went on to have a film career. Her most commercially successful pictures include Cheaper by the Dozen (2003), The Lizzie McGuire Movie (2003), and A Cinderella Story (2004). Duff has expanded her repertoire into pop music, with three RIAA certified-platinum albums.

She also launched a clothing line and an exclusive perfume with Elizabeth Arden.

Her first album was Santa Claus Lane (2002), a collection of Christmas songs which included duets with Lil Romeo, Christina Milian, and her sister Haylie Duff. Accompanied by the Disney Channel-only single ?Tell Me a Story?, it peaked well outside the top 100 on the U.S. Billboard 200 album chart, but eventually received a gold certification. The album's title track was included on the soundtrack to The Santa Clause 2, and another song, ?What Christmas Should Be? was used in Cheaper by the Dozen. Duff sang several tracks for the soundtrack to The Lizzie McGuire Movie, including ?Why Not?, which became a modest top twenty hit in Australia.

Duff's second studio album, Metamorphosis (2003), included contributions by songwriter-producers such as The Matrix and reached number one on the U.S. and Canadian charts. It became one of the biggest selling albums of the year in the U.S. and has since gone to sell over 3.7 million copies. The lead single, ?So Yesterday?, was a top ten hit in several countries and its music video received heavy airplay on MTV, while ?Come Clean? became Duff's first top forty U.S. hit and reached the top twenty elsewhere. The third single, ?Little Voice?, was not released in the U.S. and was a minor hit in Canada and Australia. In late 2003 Duff embarked on her first concert tour, the Metamorphosis Club Tour and later the Most Wanted tour. All shows on her tour were sold out, a feat neither Britney Spears nor Christina Aguilera achieved that year. She won the award for Best New Artist at the 2004 World Music Awards and Best Female Artist at the Kids Choice Awards of 2004.

Duff's third album, Most Wanted (2005), comprised her favorite tracks from her previous two albums, remixes, and new songs inspired by pop-rock musicians such as The Killers and Muse. Duff stated that it was not a greatest hits album, but that her label told her it was time to release a new album. She had more creative control over Most Wanted compared to her previous releases, co-writing and co-producing all of the new material with Joel Madden and his brother Benji, both of the band Good Charlotte. The lead single, ?Wake Up?, became Duff's highest debut on the Billboard Hot 100 and her highest peaking single in the U.S., and its video received heavy rotation on MTV. The video for the second single, ?Beat of My Heart?, was also popular, but the single itself did not chart in the U.S. The album itself debuted at number one on the Billboard 200 and became her third number-one debut in Canada. By March 2006, it had sold 1.3 million copies in the U.S. An Italy-only compilation, 4Ever, was released in 2006.

Duff's fourth album, Dignity, was released on April 4 2007. It reached the top five in the U.S. and Canada, the top twenty in Australia and the top forty in the UK. Duff co-wrote all but two of the material for the album with Kara DioGuardi, and she also worked with producer-songwriter Rhett Lawrence in Toronto, Canada. It shows her more mature side. The Dignity tour began in mid-2007.

Although Hollywood Records was planning to release up to five singles from Dignity, only three were actually released: ?Play with Fire?, presiding the album release, became a minor club hit but failed to chart in the U.S.; the second single, ?With Love?, was more successful, becoming Duff's biggest U.S. Hot 100 hit and topping the Billboard Hot Dance Club Play chart. The music video for ?With Love? was used as a commercial for Duff's first fragrance, With Love? Hilary Duff, which was launched in September 2006; ?Wrapped With Love? a new fragrance was released latter in 2008. The music video for ?Stranger? was released on July 6. Critics applauded Duff for the music and video, pointing: ?this is how a modern pop anthem should sound?. The video has Duff dressing up as a snake charmer in a sexy Balinese-inspired costume. The video received heavy airplay on MTV and Muchmusic and was very active in charts.

On September, 2008, It was officially announced that Hilary would be leaving her record label Hollywood Records after six years of service due to lack of promotion Dignity had been having since its release and lack of creative freedom since the very first album.

Currently, Hilary is not planning to release new music material, but she has recorded ?Any Other Day?, included in the soundtrack of the independent film ?What Goes Up.?

Breathe In. Breathe Out. (Deluxe Version)

All About You (CDS)

Reach Out (The Remixes)