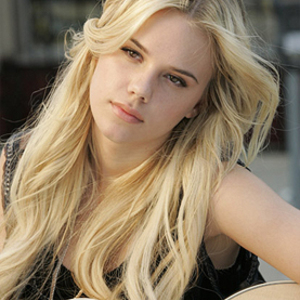 Cheyenne Nichole Kimball (born July 27, 1990) is an American singer-songwriter and guitarist. Her debut album, The Day Has Come was released in July 2006 coinciding with an MTV reality series following her entry into the music industry. She is now part of Gloriana. Career Kimball was signed to Epic Records. She appeared on and won the TV show America's Most Talented Kid at the age of twelve. She released her Epic Records debut album, The Day Has Come, on July 11, 2006...

Kimball was signed to Epic Records. She appeared on and won the TV show America's Most Talented Kid at the age of twelve. She released her Epic Records debut album, The Day Has Come, on July 11, 2006, with her first single and video, "Hanging On", sent to Top 40 mainstream radio and video outlets (VH1 and MTV) in early April 2006. She began her first cross-country tour on April 17 to promote her single and album. To further promote her music, she has an MTV television show called "Cheyenne", which premiered May 31 at 10:30 PM EST in the United States. The show later premiered on June 21 on the same day and time in Canada. She also appeared on the Aquamarine movie soundtrack with the song One Original Thing, the song was released as a single in October 2006. She has released the iTunes exclusive single "Drift Away". On December 5, 2006 Cheyenne's reality show DVD was released. Cheyenne's song "Four Walls" was released as a single in January. Cheyenne performed in the 2006 Macy's Thanksgiving Day Parade singing "Four Walls", and live at the Pro Bowl on February 10, 2007.

Kimball also appeared in a Candie's commercial with rock legend Pat Benatar. Of this experience, Cheyenne said in an interview:

They offered for Pat to do the campaign. She's never used her music for any type of commercial. She was very iffy about it. She didn't want to work with any other artists, but when they mentioned my name she said that she wanted to do it. She really liked everything that I was doing and really thought it was a good idea. So it just kind of happened. It was an honor, it really was. It was great working with her. Of course the clothes were great, too, that didn't hurt.

Cheyenne is now a vocalist and mandolinist in the band Gloriana.

The Day Has Come