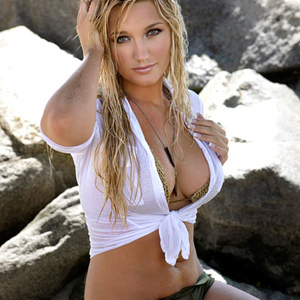 Brooke Ellen Bollea (born May 5, 1988), better known by her stage name Brooke Hogan, is an American pop/R&B singer, actress and television personality. She appeared on the reality-television series Hogan Knows Best, which focused on her family, and which premiered on July 10, 2005 on VH1. Since the cancellation of Hogan Knows Best, she's starred in a spin-off reality series called Brooke Knows Best which focuses on her life now independent from her parents and living with two roommates. She released her debut album Undiscovered in 2006.

In 2009, she will appear in a second season of Brooke Knows Best and will release her second album, The Redemption.

In high school, she took dance classes, voice lessons, and gymnastics. She joined the cheerleading squad of her Clearwater, FL school, Clearwater Central Catholic, in her freshman year. Hogan graduated from high school at the age of sixteen.

Hogan was signed to Trans Continental Records in 2002.] Some early music was produced with the help of Rich Cronin. Her first song in the United States singles charts was "Everything to Me". Produced and written by Shep Goodman and Kenny Gioia as part of her album This Voice, the single was released in July 2004. It appeared at #97 on the Billboard Hot 100 and #1 on the Hot 100 Singles Sales,[5] but dropped off the chart in a few weeks. The album was planned for release September 21, 2004,[6] but this never happened. Hogan opened for Hilary Duff in support of her unreleased debut. She sang the national anthem before the last game of the 2004 Stanley Cup Playoffs on June 7, 2004. During this time manager Larry Rudolph helped her rise to fame as well as work on her debut album.

In 2006, Hogan changed record labels and became the first artist signed to Scott Storch's label, initially called Storchaveli Records, but later named Storch Music Company. Hogan's first single, "About Us", premiered on season two finale of Hogan Knows Best. The album, Undiscovered, was released October 24, 2006. In 2006 Brooke won a Teen Choice Award for Best Choice Grill for the music video for "About Us".

She stated in a MySpace blog that she plans to release her second album in May 2009 and is currently recording it. She also stated that the second season of Brooke Knows Best will premiere around the same time. The premier of the second season is likely to coincide with the release of Hogan's second album. In 2009, she released her new single from her upcoming album. The new single is "Falling" and features Stacks. She revealed during a visit to Power 96 in March that the name of her second album would be The Redemption. It will be released with SoBe Entertainment. The album will be released on July 21, 2009 with the singles "Ruff Me Up" and "Hey Yo!".