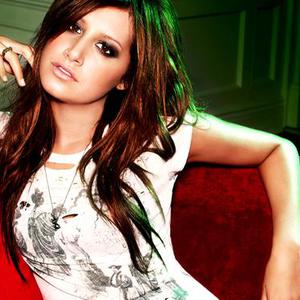 Ashley Michelle Tisdale (born July 2, 1985) is an American actress, singer, and television producer. Tisdale's first major role started in 2005 with Disney's The Suite Life of Zack & Cody as Maddie Fitzpatrick and she next played Sharpay Evans in the High School Musical film series. Her most international succesful single so far is He Said She Said, she also made music history by becoming the first female artist ever to debut with two singles simultaneously on the Billboard Hot 100 with What I've Been Looking For and Bop to the Top.

On 2006 after the first Emmy-winning High School Musical, she pursued a solo music career with the first solo single Kiss The Girl and later she released her debut album Headstrong on February 6, 2007. The album debuted at number five in the U.S. charts, selling over 64,000 copies in the first week, and was later certified Gold. Tisdale later released a music DVD, There's Something About Ashley.

She continued her role as Sharpay Evans in High School Musical 2 and High School Musical 3: Senior Year. High School Musical 2 was the most-watched basic cable show on record. Tisdale has a supporting role as Candace Flynn in Disney Channel's Phineas and Ferb. As of February 2009, Tisdale's second album Guilty Pleasure to be released in July 28, 2009 in U.S., with the first single It's Alright, It's OK, and is set to star in the film They Came from Upstairs, which is scheduled to be released in July 2009.
In August 2008, Forbes listed her among Hollywood's 10 top-paid young entertainers. Tisdale will released her first EP Degree Girl OMG! Jams in June 2008 to promote Degree Girl.

Tisdale was born in Monmouth County, New Jersey, United States on July 2, 1985, to Lisa (n?e Morris) and Mike Tisdale, who runs a construction company. She grew up in Ocean Township. Her elder sister, Jennifer Tisdale, is an actress and model, and her maternal grandfather, Arnold Morris, developed Ginsu Knives; through her grandfather, she is also related to businessman Ron Popeil. Tisdale is Jewish.

When she was three, Tisdale was discovered by Bill Perlman, her current manager, at South Shores Mall. On her first audition, Tisdale landed a JC Penney spot and went on to appear in more than 100 commercials as a kid. At the age of eight, she was cast in a leading role in the Broadway musical, Les Mis?rables, and later toured internationally with the cast of Annie. She began her acting career by appearing in Gypsy: A Musical Fable and The Sound of Music at the Jewish Community Center of Monmouth County. At age twelve, Tisdale sang for american president Bill Clinton in the White House. In an interview given on People, Tisdale stated that her first appearance in commercials was at the age of three for JCPenney. Tisdale also was a Ford Models along with Lindsay Lohan and Mischa Barton.

During the late 1990s and early 2000s, Tisdale made guest appearances in several television series, which included George Lopez, Smart Guy, 7th Heaven, Grounded for Life, Strong Medicine, Charmed, Beverly Hills, 90210 and Bette, where she co-stared with Brenda Song for the first time. For her role in Boston Public she received a 2000 Young Artist Award nomination for "best guest performance in a TV drama". Tisdale had a voice role in the 1998 animated movie A Bug's Life, and a minor role in the 2001 film Donnie Darko. She had recurring roles on sitcoms with The Hughleys in 2002 and Still Standing in 2003.

In 2004, Tisdale was cast in the role of Maddie Fitzpatrick on The Suite Life of Zack & Cody after auditioning for the roles of Maddie Fitzpatrick and London Tipton. While performing on the show, Tisdale received a voice role in Whisper of the Heart, the English-language version of the Japanese animated feature, Mimi wo Sumaseba.

Tisdale was soon cast as Sharpay Evans in Disney Channel Original Movie High School Musical. Tisdale had originally auditioned for the role of Gabriella Montez, but was eventually cast as Sharpay because it was felt that her alto voice suited a darker character. Producers did not initially consider her because of her good-girl image on The Suite Life. Tisdale's role in High School Musical required her to perform several songs. Her contributions to the High School Musical soundtrack included What I've Been Looking For, Bop to the Top, and We're All in This Together. All three charted on the Billboard Hot 100.Tisdale made music history by becoming the first female artist ever to debut with two singles simultaneously on the Hot 100 with What I've Been Looking For and Bop to the Top. The soundtrack, on which Tisdale sings lead vocals on several songs, became the top-selling album of 2006. Tisdale appeared in the two episodes of MTV's Punk'd and in the Disney Channel Games 2006.

Her music career developed in 2006. In June, Tisdale signed in a record deal with Warner Bros. Records. Prior to the release of her debut album, Tisdale covered the hit single Last Christmas (originally by Wham!) and released it in 2006 as the first single in her deal with Warner Bros. but it failed to chart on U.S. Billboard Hot 100. With Disney, she recorded a version of Some Day My Prince Will Come with Drew Seeley for DisneyMania 4 and a version of "A Dream Is a Wish Your Heart Makes" with other members of the Disney Channel Circle of Stars. She was featured on the music video which was later included on Cinderella: Platinum Edition DVD. Tisdale also recorded a cover version of the song Kiss The Girl which was first heard on Radio Disney in September 2006 and shot a music video which premiered on Disney Channel after a The Suite Life of Zack and Cody episode and was later included on The Little Mermaid: Platinum Edition DVD.

Tisdale launched a worldwide tour with the rest of the cast of High School Musical in fall 2006, performing the songs from the soundtrack album as well of three songs from her debut album, which was released on 2007. A DVD and a live album named High School Musical: The Concert were released in 2007, featuring We'll Be Together (Live), He Said She Said and Headstrong.

Tisdale released a three-song EP by Warner Bros. Records on December 12, 2006 prior to the release of her debut album. The EP was called He Said She Said and also included Headstrong and her holiday single Last Christmas. It was released to promote the full length album. The EP was available for purchase during the High School Musical: The Concert were released in 2007, featuring We'll Be Together (Live).

Tisdale's first solo album, Headstrong, was released on February 6, 2007 and was distributed by Warner Bros. Records. The album debuted at number five on the Billboard 200 album charts, selling 64,000 copies. Tisdale described Headstrong as a chance for her fans to get to know her better. "I want people to know that I'm a real person, and that I've been through normal situations, like crushes and heartbreaks.", said Tisdale. She also admitted that the album was called Headstrong because she is a pretty headstrong type of person.

She reprised her role as Sharpay Evans in High School Musical 2 which premiered on August 17, 2007. She also appeared on the soundtrack, performing several songs such as "Fabulous", "You Are The Music In Me (Sharpay Version)" and "What Time Is It?". Tisdale has a supporting role in the Disney Channel series Phineas and Ferb, voicing Candace Flynn. She also voiced Camille Leon on Disney Channel series Kim Possible. Tisdale also received her first award on Nickelodeon Kids' Choice Awards UK as "Best TV Actress" by her acting on The Suite Life of Zack & Cody.

In 2007, Tisdale released her first music DVD, There's Something About Ashley, with a three-song trilogy comprised by music videos and a documentary about the Headstrong album creation.[43]

The album was re-released for the first time in Christmas 2007 in a Holiday Edition with the standard CD, the DVD There's Something About Ashley in a digipack format, and some other merchandise.[44] The album was re-released again in a limited Deluxe Edition format, released only in Germany with the DVD.[45] Tisdale promoted the album and the DVD in a mini mall-tour in mid-October 2007 in which she had an Ecko Red fashion show and later, performed live three songs in selected American's malls.[46] The album was certified Gold in the U.S. for reaching 500,000 copies shipped[47] and Billboard readers chose it the sixth best album of the year.[48]

On November 12, 2008. Tisdale along with the High School Musical cast performed live a Christmas version of the hit song "What Time Is It?" from High School Musical 2 during the annual event Walt Disney World Christmas Day Parade.[49] On November 28, 2007, Tisdale hosted a part of the "75th Rockefeller Christmas Tree" in New York City with Nick Lachey and performed a couple of her singles after a small interview.[50]

"MTV News" confirmed in an interview that her first movie with herself being the star is titled Picture This, which was released on DVD in 2008.[51] In addition to playing the role of Mandy Gilbert, Tisdale is credited as one of the executive producers of the movie.[52] She also covered the 80's hit song "Shadows of the Night" for the film. Tisdale made a special appearance in the credits of the movie Bring It On: In It to Win It, where she performed her single "He Said She Said".