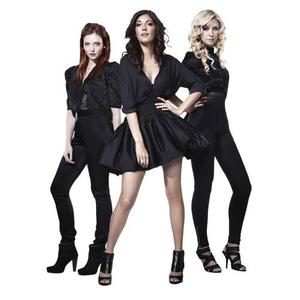 Play is the name of more than one artist: 1. A Swedish Pop and R&B group 2. A New Wave/Minimal Synthpop band from the UK 3. A Russian electronica artist 4. A Polish electro artist 5. An American band 1) Hailing from Sweden, Play encompasses pop and r&b to create a youthful sound. Formed in 2000 by Laila Bagge, Play was made up of 4 girls; Anna Sundstrand, Ana?s Lameche, Rosie Munter, and Faye Hamlin.

1. A Swedish Pop and R&B group
2. A New Wave/Minimal Synthpop band from the UK
3. A Russian electronica artist
4. A Polish electro artist
5. An American band

1) Hailing from Sweden, Play encompasses pop and r&b to create a youthful sound. Formed in 2000 by Laila Bagge, Play was made up of 4 girls; Anna Sundstrand, Ana?s Lameche, Rosie Munter, and Faye Hamlin. With this lineup they released 2 albums and toured with acts such as Destiny's Child and Aaron Carter. Between late 2003 and the middle of 2004 Faye Hamlin decided to leave the group and Janet Leon joined. The girls soon released a 3rd album, titled Don't Stop The Music, and joined the Spring Thing Tour with acts such as Jump5 and Stevie Brock. Later in 2004 the girls also released a christmas album, and proceeded with a small tour to promote the album. Between the releases of the last two albums, Play made the move from Columbia records to a smaller label from which the christmas album was released. News about the girls nearly dried up as rumors circled about the withstanding of the group. This was even more intensified with Columbia's release of Girls Mind, a "best of" album from the groups previous line-up with Faye Hamlin. It was later confirmed in September 2005 that the group had decided to call it quits.

In 2009, two of the original members of the group, Ana?s Lemeche and Fanny ("Faye") Hamlin, decided to rejoin and release a cd. They contacted their previous manager Laila Bagge who welcomed them with open arms. They found a third member in Sanne Karlsson. Their work towards a successful album launch could be followed on the Swedish tv show "Made In Sweden".

2) Play was a New Wave/Minimal Synthpop band from the UK, formed in the early 80s by Wayne Kennedy, later joined on recordings by Drinking Electricity members David Rome (Survival records founder) and P.K. Edgely (Survival's designer, formerly on a group known as The Limit). They released a number of singles between 1981 and 1985 and their sole album, "Red Movies" later that year.

3) Play is also the name of a Russian electronica artist.

The front woman Olga "Play" from Voronezh had big success with her debut song "Ty Ne Odin" (You're Not Alone) on many radio stations in Russia and East Europe. There are pop, dance and trance tunes. The second album was released not as PLAY but Olga PLAY, this time into house, disco and downtempo style.

4) Play is also the name of a Polish electro artist.

Play is a project of Slawek Pietrzak, the former guitarist of the famous vocalist Kazik and his band ?Kult?. Additionally, He is the owner of the independent record label SP Records. The band was formed in the summer of 1998 by Slawek Pietrzak, ?Pyza' (the drummer who collaborated not only with Play, but first of all with Kasia Nosowska and Tymon Tyma?ski) and Olaf Deriglasoff (The Captain's Children, Pudelsi, Kazik, Apteka, Yugoton). The musicians recorded in ?Slabe Studio SP' firstly rough sketches - their own ideas and compositions - with the invaluable help of Slawek Janowski. For two years Slawek Pietrzak (on and off, while dividing his time between running the company and collaborating with Kazik Staszewski), was enriching the songs and sound tracks as best He could with new musical lines and adding unusual, amazing sounds on his own. When the album was almost completed, He invited Tomasz Sta?ko and Andrzej Smolik to cooperate. But there was still the unsolved issue of lyrics and vocalist. Then Slawek Pietrzak met Marek ?ledziewski by chance while filming the videoclip ?Andrzej Go?ota? for Kazik Live. ?ledziewski, the director of the videoclip, created the lyrics and sang them. The song ?001? was released in 2001 as the first single to promote the forthcoming new album. Meanwhile, new material had been gathered and the new album was ready for release. New artists took part in the creative process e.g. Artur Affek (Kayah's guitarist), Dj Feel X (Kaliber 44) and Kasia Nowicka (Novika).
The whole album was recorded by co-producers Slawek Janowski and Sebastian Witkowski (who also played on the keyboards).

Us Against The World