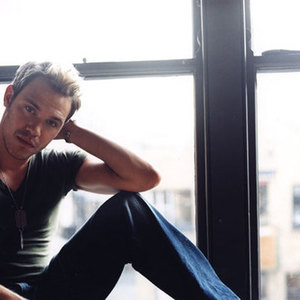 William Robert Young (born January 20, 1979), is a British singer and actor. He catapulted to fame after winning the inaugural UK Pop Idol contest in 2002. Young was born in Wokingham, Berkshire, UK, with a non-identical twin, Rupert. He was educated at Horris Hill preparatory school and Wellington College. He then attended the University of Exeter where he read Politics. At university, some of Young's old haunts included Timepiece, The Old Firehouse, and Harry's, where he used to work.

Young was born in Wokingham, Berkshire, UK, with a non-identical twin, Rupert. He was educated at Horris Hill preparatory school and Wellington College.

He then attended the University of Exeter where he read Politics. At university, some of Young's old haunts included Timepiece, The Old Firehouse, and Harry's, where he used to work. In September 2001, he became a student at the Arts Educational School in Chiswick, London, starting a three-year course in musical theatre with a scholarship.

In February 2002, Young came to national prominence by singing in and winning the ITV singing contest/reality tv show Pop Idol.

Contrary to popular belief, Will was not a surprise winner when beating Gareth Gates in the final show; in fact, he gained the most votes nearly every week throughout the entire finals. A lot of 'casual' viewers of Pop Idol may have been surprised at Will's victory because Gareth had got a lot of publicity (partly) due to his stutter, perhaps creating the illusion that he was more likely to win than Will.

Young's first single was a double A-side featuring Westlife's song "Evergreen" and "Anything Is Possible", a new song written for the winner of the show by Cathy Dennis. This became the fastest-selling debut in UK chart history selling 403,027 copies on its day of release. It went on to sell over 1.4 million copies and in the official list of the all-time best-selling singles in the UK issued later that year, it appeared 12th. Will subsequently made headlines by revealing he was gay. He went on to win the Brits Best Breakthrough Act Award and a plethora of other awards, including most recently Best Artist in the Digital Music Awards October 2004. Early singles of note include "Light My Fire" (done Jos? Feliciano style), "Leave Right Now", and "Friday's Child". The latter is the title of his second album, which was largely self-penned, went five-times platinum, also receiving awards and critical acclaim.

Young received his second Brit Award in February 2005 for his co-written single "Your Game". Following sell out theatre and arena tours in 2004, he toured again at outside festival venues in Summer 2005. On July 6, 2005, he performed at Edinburgh 50,000 - The Final Push, the final concert of Live 8, where he did a duet with James Brown on "Papa's Got A Brand New Bag". His third album, Keep On was released in November 2005, together with the first single from same, "Switch It On".

A greatest hits collection, The Hits, was released on the 16th of November 2009. contains twelve songs from Young's first four studio albums, and two new tracks. The first is new single "Hopes & Fears", and the second is a ballad called "If It Hadn't Been for Love". The album will be released as a standard edition and a deluxe edition, which will include a DVD of all the music videos.

Songfacts reports that Jealousy, the first single from Young's fifth studio album Echoes is a dance pop track produced by Richard X (Sugababes, Annie). The song will be released on August 21, 2011.

Young has also broadened his repertoire by launching an acting career, taking a role in the BBC film, Mrs. Henderson Presents, starring Judi Dench and Bob Hoskins, with Will playing the character of 'Bertie'. The film went on release in the UK on 25 November 2005, and received excellent reviews, not least for Young's performance as actor and singer in the movie. It includes a scene in which he appears naked.

Will Young supports the charity Women's Aid, about which he wrote: "I am proud to put my name beside this cause and hope that I may be able to help more people affected by the terrors of domestic violence as well as help to create a wider awareness within our society."

Will also supports Mencap and Positive Action Southwest (PASW) for which he performed at his first solo concert in July 2003 at Killerton Hall, Exeter.

I Just Want A Lover (MCD)