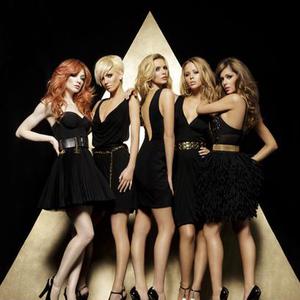 Girls Aloud are a critically acclaimed British girl group comprising Nicola Roberts, Nadine Coyle, Cheryl Cole, Kimberley Walsh and Sarah Harding. The band was formed on the reality TV show Popstars: The Rivals, in which a girl band was pitted against a boy band in the race for the UK Christmas number one single in 2002. Girls Aloud came out on top, with their debut single Sound of the Underground hitting number one and earning them a place in the Guinness Book of World Records as the first girl band in British history to debut at number one.

As well as the fastest a band has gone from being formed to getting a number one and the first band to get a Christmas number one with their debut single.

The band has released five studio albums - Sound of the Underground (2003), What Will the Neighbours Say? (2004), Chemistry (2005), Tangled Up (2007) and Out of Control (2008), plus a Greatest Hits compilation, The Sound Of Girls Aloud (2006). Major singles include Sound of the Underground, Love Machine, Biology, Something Kinda Ooooh, Call the Shots and The Promise. The girls have a record 20 consecutive top 10 singles under their collective belt now, including 4 number ones. Their lowest charting top ten single, The Loving Kind, reached number 10. However, the girls 21st single Untouchable ended their top ten streak, peaking at 11 in May. Despite this, up to week ending 21st June, it has outsold top ten singles (in order of release and highest peak in the UK chart) Wake Me Up (no.4), Long Hot Summer (no.7), See the Day (no.9), Whole Lotta History (no.6) and I Think We're Alone Now, (no.4).

The girls have embarked on five major UK tours to date, traditionally starting in April or May of each year, since 2005. The 2006, 2007, 2008 and 2009 shows have all been sold-out arena tours, earning the girls a reputation as putting on an explosive live show. The most recent tour, Out Of Control tour 2009, is the largest tour for the girls to date, selling out venues across the UK. They are also set to be the support for Coldplay at a number of their tour dates in September 2009, including Wembley Stadium, where the girls are expected to perform a 75 minute set.

Girls Aloud are unusual in that their management has never made a major push for them to be successful other than within the UK market, and despite their huge success in London, United Kingdom, they are relatively unknown elsewhere in the world. A shame, perhaps, as Pitchfork Media called them one of the two best girl groups of the 21st Century along with Sugababes. Girls Aloud performed a cover of Aerosmith and Run DMC's 'Walk This Way' for Children In Need, with Sugababes.

Girls Aloud released their fifth studio album, Out of Control, on November 3rd 2008. The album debuted at #1 on the UK Albums Chart, selling over 85,000 copies. The lead single, the 60s flavoured The Promise, entered the UK Singles Chart at #1, selling more than 70,000 copies on its first week of release. The album coincides with band member Cheryl's appearance as a judge on UK TV show The X Factor, where she will manage the three final girls in an attempt to secure one of them a million pound recording contract over the other finalists. Cheryl is a judge alongside Simon Cowell, Louis Walsh and Dannii Minogue. The girls also released their autobiography, Dreams That Glitter, in October 2008.

After a three year hiatus, Girls Aloud returned in October 2012 for their 10th anniversary. A countdown on their website and social media accounts kicked off on 9th October with an announcement expected on Friday 19th October. Their 22nd single, 'Something New,' leaked online on 15th October following the release a teaser video and received high praise from fans. The track premiered on Capital FM the following day.

The Sound Of Girls Aloud (The Greatest Hits)