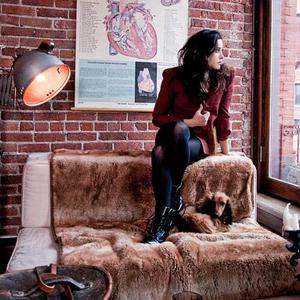 Vanessa Lee Carlton (born August 16, 1980 in Milford, Pennsylvania) is an American pop and rock singer, songwriter and pianist best known for her hit song "A Thousand Miles", the first single from her platinum-selling debut album Be Not Nobody (2002). Vanessa's fourth studio album, "Rabbits On The Run" was released on July 26th, 2011. Speaking with Songfacts about the lead single Carousel in a 2011 interview, Carlton explained that she wrote the song in a dream where the "da na na na na" tune was floating around.

Vanessa's fourth studio album, "Rabbits On The Run" was released on July 26th, 2011. Speaking with Songfacts about the lead single Carousel in a 2011 interview, Carlton explained that she wrote the song in a dream where the "da na na na na" tune was floating around.

Three Grammy nominations, three studio albums, and a collection of hit songs has been the result of a fruitful career thus far for Vanessa Carlton, who first exploded onto the scene in 2002 with her stunning debut Be Not Nobody, and world-wide hit single ?A Thousand Miles.?

Vanessa Carlton first began playing the piano as a toddler, continuing on an artistic road with her attendance at the School of American Ballet in New York, a path she would eventually abandon in favor of songwriting. She re-embraced the piano and began performing in bars and clubs across Manhattan. While studying at Columbia University, Carlton was signed to Interscope Records, but made her formal debut on A&M under veteran producer Ron Fair.

Her debut album in April 2002, Be Not Nobody, resonated with audiences of all ages world-wide, especially the hit piano single ?A Thousand Miles,? which reached the Top 5 on Billboard's Hot 100 Singles chart, #1 in Australia, and Top 10 in the UK. Carlton went on to earn 2003 Grammy nominations for Record of the Year, Song of the Year and Best Instrumental Arrangement Accompanying Vocalist (?A Thousand Miles?). The album witnessed global success, reaching Gold status in over 10 countries, and Platinum status in Asian territories, such as Hong Kong, Indonesia, and Taiwan.

Her second album Harmonium (2004), which yielded the single ?White Houses,? continued to inspire an increasingly loyal global fan base and garnered some the best reviews of her career.

Her record release in 2007, Heroes & Thieves ?might be my first thematic record,? Carlton says, adding that the songs reveal themselves like chapters in a book, one that fans can crack open (Vanessa has often explained during her live shows that the second single from "Heroes & Thieves" entitled "Hands On Me" is the second chapter to the album). Paying homage to the area of Manhattan where most of its songs were written, the first single off of the 2007 record, appropriately dubbed ?Nolita Fairytale,? is a syncopated, upbeat piece that paints a dramatic musical landscape. ? That song is really about finding joy in unexpected environments. How sometimes losing things makes you realize what you have, which is like a quasi fairytale,? says Carlton. Heroes & Thieves was recorded in the San Francisco studio of Third Eye Blind founder Stephan Jenkins and the Los Angeles studio of producer/songwriter Linda Perry.

Most recently, Vanessa has completed material for her fourth studio album, titled Rabbits On The Run, released on July 26th, 2011. Material for this album was produced by Steve Osborne (U2, B-52&rsquo;s, KT Tunstall), and was recorded in the UK at Peter Gabriel's well-renowned Real World Studios.

In 2003, Vanessa portrayed Dusty Springfield on the television show "American Dreams" on Heartache (episode #1.14) and performed a cover of the song "Wishin' and Hopin'".

One of Vanessa's touring guitarists, Ari Ingber, (other than being credited as a group vocalist on "More Than This) is the lead vocalist/guitarist for the band The Upwelling. Ari also co-wrote the song "About To Break" from Third Eye Blind's "Ursa Major".

One of Vanessa's touring bassists, Jon Evans, (other than being credited as bassist on Heroes & Thieves and bass guitarist on Third Eye Blind's "Ursa Major") is part of the band Redfish, Bluefish and has also performed with Tori Amos.

One of Vanessa's touring guitarists, Mark Beauchemin, (other than performing with Vanessa on the song "More Than This (Campfire Take)" for the album "Songs For Tibet - The Art of Peace") used to be part of the band SR-71 and currently has his own band.

Besides having Stevie Nicks do backing vocals on her song "The One" and Stephan Jenkins (of Third Eye Blind) do backing vocals on select songs on Heroes & Thieves, Vanessa has made several contributions to works of other artists and bands including: Vocals on the song Big Yellow Taxi with Counting Crows; backing vocals on the song Moving On by Kimya Dawson; piano on the song Everybody's Got To Learn Sometime by Zucchero; vocals on the song M A K E L O V E T O M E with 7 Aurelius; co-writing 3 songs with The Matrix; Providing vocals on the various artist compilation song "Put A Little Love", created for a Gap clothing company campaign which also featured Al Green, Melissa Etheridge, Kelly Rowland, Stephan Jenkins, Ginuwine, Musiq, Heather Headley and Gavin DeGraw; Providing vocals and piano on the various artist compilation song "Love Revolution", a cover of Lenny Kravitz's song, created for a Kohl's clothing company campaign which also featured Avril Lavigne, Lenny Kravitz, Plain White T's and The Red Jumpsuit Apparatus; Performing live with artists/bands including a cover of Elton John's song "Don't Let The Sun Go Down On Me" with Elton John's band, duets with Shlomo, Shlomo and the Vocal Orchestra, Stevie Nicks, Goo Goo Dolls and Counting Crows and backing vocals on select songs with Counting Crows.

Vanessa is credited with providing piano on the track "Company" and backing vocals on "Faster" from Third Eye Blind's album "Out of the Vein".
Vanessa is also credited as being a performer on The Upwelling's debut album "An American Stranger" which Stephan Jenkins also produced.

Love Is An Art

Rabbits on the Run