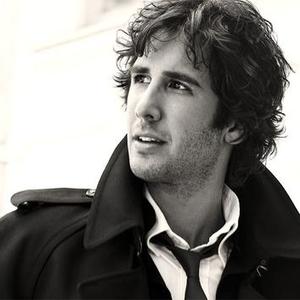 Joshua Winslow Groban (born in Los Angeles, CA , on February 27, 1981) is an American singer known for his mature, dusky baritone voice. His musical style ranges from classical to pop. After only one year in the theatre department at Carnegie Mellon University, his choice school, Groban left when he was offered a recording contract at Warner Bros. Records through David Foster's own 143 Records imprint.

After only one year in the theatre department at Carnegie Mellon University, his choice school, Groban left when he was offered a recording contract at Warner Bros. Records through David Foster's own 143 Records imprint. With regard to signing Groban, Foster said: "I love his natural ability in the pop and rock arena, but I love his sense of classics even more. He's a true musical force to be reckoned with" [5]. Therefore, under Foster's influence, Groban's first album focused more on the classics with songs such as "Gira Con Me" and "Alle Luce Del Sole," the first ones decided on by Foster and Groban.

Soon after being picked up by David Foster, Groban went on to perform "There For Me" with Sarah Brightman on her 2000-2001 La Luna Tour, featured on her "La Luna" Concert DVD, and made his recording debut by singing "For Always" with Lara Fabian on the movie soundtrack to A.I.: Artificial Intelligence (2001). He also became involved in many benefit shows, including the following: "The Andre Agassi Grand Slam Event For Children", singing alongside Elton John, Stevie Wonder, Don Henley and Robin Williams; "Muhammad Ali's Fight Night Foundation" which honored Michael J. Fox and others; "The Family Celebration" (2001) which was co-hosted by President Clinton and his wife, Hillary Rodham Clinton, and David E. Kelley and his wife, Michelle Pfeiffer; and Michael Milken's CapCure event, which raises funds for cancer research.

In May 2001, Groban played the role of Malcolm Wyatt in the season finale of the television series Ally McBeal, performing "You're Still You." The series creator David E. Kelley was impressed at Groban's performance at The Family Celebration event, and, based on the audience reaction to Groban's singing, Kelley created a character for Josh in this finale. The character of Malcolm Wyatt was so popular, with 8,000 emails from fans, that Groban was asked to come back the next season to reprise his role and perform "To Where You Are."

On November 20, 2001, Groban's self-titled debut album Josh Groban was released and, over the next year, it went from gold to double-platinum.

On February 24, 2002, Groban performed "The Prayer" with Charlotte Church at the closing ceremonies of the Winter Olympics, and by November, he had his own PBS special Josh Groban In Concert (2002). The following month, he performed "To Where You Are" and "The Prayer" at the Nobel Peace Prize Concert in Oslo, Norway, and joined The Corrs, Ronan Keating, Sting, Lionel Richie and others for a holiday performance at the Vatican in Rome, Italy.

On November 11, 2003, his second album Closer was released. Josh himself said that he believed that this second album was a better reflection of him and that his audience would be able to get a better idea of him personally from listening to it. "What most people know about me, they know through my music. This time, I've tried to open that door as wide as possible. These songs are a giant step closer to who I really am and what my music is all about. Hence the title".

Two months after Closer was released, it rose on the Billboard charts from number 11 to number one. Both of Groban's albums were produced by David Foster, released under Foster's 143 Records and distributed by Warner Music. His cover of Secret Garden's "You Raise Me Up" became very popular on the adult contemporary charts.

During the summer of 2004, Josh once again returned to the birthplace of his artistic growth, Interlochen, where he gave a legendary performance to local residents of Michigan and the many, many campers, ranging from elementary school to high school age. He additionally signed many autographs, and spoke about his experiences as a young performer.

On November 30, 2004, his second live DVD, Live At The Greek, was released. It also ran as a Great Performances special on PBS. Also in 2004, Josh performed "Remember When It Rained," backed by a full orchestra, at the American Music Awards where he was up for Favorite Male Artist in the pop category. Josh and his recordings were nominated for more than a dozen awards in 2004, including the American Music Award, World Music Award, Academy Award, and a Grammy.

During the first week of September 2006, Groban's latest single entitled "You Are Loved (Don't Give Up)", was exclusively released to AOL's First Listen. On November 7, 2006, Josh released his third studio album, "Awake." He is kicking off his 2007-2008 tour on February 17th in Verona, New York.