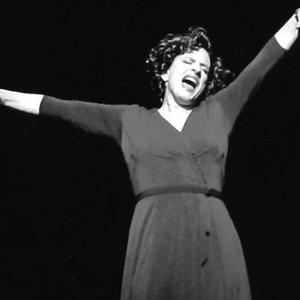 Patti LuPone (born April 21, 1949 in Northport, Long Island, New York) is an American singer and actress. She is most famous stage for her Tony Award-winning roles in Evita (1979) and Gypsy (2008). LuPone has also appeared in the 1987 revival of Anything Goes and 2005 revival of Sweeney Todd. She has achieved iconic status for her involvement in productions of Les Miserables, Sunset Blvd., Noises Off, Company, Candide, Women on the Verge of a Nervous Breakdown, Oliver!, The Three Sisters, and Master Class.

She is the author of "Patti LuPone: A Memoir."


Early life
LuPone is of Italian (Sicilian [1]) descent. [2] She is a graduate of Northport High School. LuPone was part of the first graduating class of Juilliard's Drama Division.


Theatre
In 1972 John Houseman took his beloved class and formed The Acting Company, making them America's foremost nationally touring repertory theater company. Her stint with the Acting Company lasted from 1972 to 1976, and she was featured in such works as The School for Scandal, Women Beware Women, The Beggar's Opera, The Time of Your Life, The Lower Depths, The Hostage, Next Time I'll Sing to You, Measure for Measure, Scapin, Edward II, The Orchestra, Love's Labours Lost, Arms and the Man, The Way of the World, and The Robber Bridegroom, for which she received a Tony Award nomination. In 1986, alumni members of The Acting Company joined forces for a West End revival of The Cradle Will Rock in which LuPone played Moll, and for which she received an Olivier Award. Ms. LuPone is an important player in contemporary American musical theater. She made her Broadway debut in the play Three Sisters Her first leading role in a musical was The Baker's Wife, which did not make it to NYC. She has performed on Broadway in works by Andrew Lloyd Webber, Stephen Sondheim and others. She won a Tony Award for Evita in 1980.

In 1987, LuPone landed the role of Reno Sweeney in the Broadway revival of Anything Goes, for which she won the Drama Desk Award for Best Actress in a Musical. LuPone's return to Broadway was supposed to be with the musical Sunset Boulevard, however Andrew Lloyd Webber breached LuPone's contract by recasting her role for the New York production. LuPone subsequently sued Webber, but the two settled the dispute out of court with a hefty settlement in favor of LuPone. After this LuPone was so disappointed, it took her a year to return to the stage. In 1996, LuPone returned to Broadway in a triumphant fashion in a concert style celebration of her career called Patti LuPone on Broadway for which she received an Outer Critics Circle Award for Outstanding Solo Performance. Also in 1996 LuPone was asked to replace Zoe Caldwell in the Terrance McNally play, Master Class for which she received rave reviews and later performed in the West End. In 2001 she starred along side Peter Gallagher in the Broadway revival of Noises Off. Other Broadway credits include Working (1978), Oliver! (1984), and Accidental Death of an Anarchist (1982).

LuPone's triumphs in the opera world extend to Kennedy Center's production of Regina, The world premier of Jake Heggie's To Hell and Back, and the Rise and Fall of the City of Mahagonny opposite long time friend Audra McDonald and directed by John Doyle with the Los Angeles Opera.

She has three one-woman shows that she performs across the country: Matters of the Heart, Coulda, Woulda, Shoulda, and The Lady With the Torch, which sold out Carnegie Hall.

She originated the role of Fantine in the Royal Shakespeare production of the musical Les Mis?rables, becoming the first American actress to win the Olivier Award. LuPone returned to the London to portray Norma Desmond in Andrew Lloyd Webber's Sunset Boulevard in the West End.

LuPone recently starred on Broadway as Mrs. Lovett in John Doyle's new staging of Sweeney Todd, the Demon Barber of Fleet Street. Ms. LuPone was nominated for a Tony Award for this role.


Television
LuPone played Libby Thatcher on the television drama Life Goes On, which ran on ABC from 1989 to 1993. She has twice been nominated for an Emmy Award for the TV movie The Song Spinner, and her guest appearance on Frasier. LuPone's further TV career includes a recurring spot on the last season of HBO's hit series Oz. She had a cameo as herself in the episode of Saturday Night Live hosted by Kelsey Grammer in 1998. She also played herself in an episode of Will and Grace entitled "BullyWoolley" 2005. She also appeared on the series "Ugly Betty" in 2007 as Mrs. Jean Wiener, the mother of Wilhelmina's secretary, Mark.

Known for her range and versatility, she once played Lady Bird Johnson opposite Randy Quaid's Lyndon B. Johnson in the television movie, LBJ.

Recordings
LuPone recorded a duet with Seth MacFarlane (in character as Glenn Quagmire) on the 2005 album Family Guy: Live In Vegas.

LuPone released a new CD in 2006, of one of her shows The Lady with the Torch, on Sh-k-Boom Records. In December she released bonus tracks for that CD only on iTunes.

Personal life
Her first name, Patti, is not short for ?Patricia?; it is her mother's maiden name. LuPone's great-grand-aunt was the celebrated 19th-century opera singer Adelina Patti. Her brother is actor, dancer, and director Robert LuPone, and her other brother William is a teacher. When they were young they performed on Long Island as the LuPone Trio.

She had a long-term relationship with fellow Juilliard classmate Kevin Kline.

She married Matthew Johnston in 1988 on the Vivian Beaumont Stage at Lincoln Center after filming the TV movie LBJ, they had one child on 21 November 1990, Joshua Luke Johnston.

She currently resides with her family in upstate Connecticut.

The Lady With The Torch