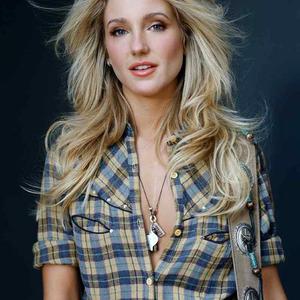 For Whitney Duncan, it's always been about the right relationships. They helped shape her as a young girl nurturing her passion for music in a small Tennessee town. They were there to support her efforts to break into the upper reaches of the music business as a teenager. And, not long ago, when her path seemed uncertain, she knew she would find them again. "There were times when I wondered, 'Is this going to work?'? she says, "and times when I was frustrated, but I realized a lot of people go through this.

"There were times when I wondered, 'Is this going to work?'? she says, "and times when I was frustrated, but I realized a lot of people go through this. 'I'm young,' I thought. 'I still have time. I don't need to freak out and get impatient. Eventually the time will be right.'"

Her patience paid off, and the breakthrough came, as it often does, from a serendipitous introduction.

"My booking agent introduced me to Mark Bright and said, 'He's a guy who will totally get what you're wanting to do,'" says Whitney. Her first meeting with Bright, whose production credits include Carrie Underwood, Rascal Flatts and Sara Evans, would be a major career turning point, although at the time it felt more like a therapy session.

"I met with Mark and he was the coolest guy," she says, "so I just spilled everything. I told him about the struggles I'd been through and what I hoped to accomplish.' We totally connected and he got it. He said, 'I'm on board. Let's do it.'"

?Everything about her screams greatness and makes me want to share her with everyone,? says Bright, explaining his affinity for her. ?She's been able to attain a depth in her writing that is rare for an artist so young. This woman is just awesome.?

The two kindred spirits had recorded three sides when the final piece of the relationship puzzle fell into place in the form of John Shanks, known for his work with Sheryl Crow, Keith Urban and Kelly Clarkson. Shanks was working at the time with Bon Jovi, and had stopped to visit Bright at his offices. Bright, says Whitney, "went on like a proud parent" to Shanks, who asked if he could write with her then and there.
"What are the chances?" she says with a laugh.

The three-way combination--with Shanks and Bright co-producing--resulted in Right Road Now, a debut album that introduces Whitney as an intriguing new voice in contemporary country music, a woman who matches her vocal prowess with songwriting of real depth and breadth. She wrote every song on the CD, in conjunction with Both Bright and Shanks, as well as top-drawer Nashville tunesmiths like Hillary Lindsay, Brett James, Chris Tompkins and Gordie Sampson. It finds Whitney celebrating love, both new, in the steamy "Kinda Crazy," and well established, in the joyfully sensual "Fireflies"; chronicling love's failure in the self-assured "When I Said I Would" and the moody "Burn It Down"; and doing justice both to pure sass, in "The Bed That You Made," and to the raw pathos of "God Close Your Eyes." With the title song, Whitney and co-writers Shanks and James perfectly encapsulate the roses-from-thorns dynamic that infuses both the relationship in the song and the musical rebirth Whitney has experienced.

Through it all, Whitney displays the maturity and self-assurance of a woman who has found her voice, something that has come after a lifelong journey. She was born in Scotts Hill, Tennessee, a town of about 900--"There was just one four-way stop," she says. Her father is a state environmentalist and her mother a schoolteacher. It was her grandfather, though, who helped introduce her to music.

"I was a grandaddy's girl," she says. "I remember being at their house when I was four or five, sitting in front of the TV watching Elvis videos with him. I knew when I first watched Elvis, 'That's what I want to do!?

She had the talent to go with the drive, and after gaining confidence by performing for her family she began singing in church. Soon, she was performing at fairs and festivals.

"I dragged my parents everywhere, every weekend almost," she says. "There was always a strawberry festival or a barbecue festival, and we would take trips to Kentucky, Missouri, and wherever else I could for a chance to perform."

Whitney sang at school events, including both her kindergarten and eighth-grade graduations, placed third in an all-age talent competition at Loretta Lynn's Ranch in Hurricane Mills, and got the chance to sing with a group of promising singers her vocal coach worked with, both at Euro Disney and at Paris's Notre Dame cathedral. Then, in her early teens, she began traveling to Nashville.

"I played at Tootsie's a few times when I was 13 or so," she says. "I remember I couldn't stay around because of my age, but I loved being on that stage."

Someone who heard her sing at a competition offered to put together a three-song demo for them for what she and her parents considered a great deal of money. Her vocal coach recommended a Nashville attorney, who said, "Don't do it. There are other ways to go about it." He became a mentor and Whitney began traveling back and forth to Nashville to write songs. She set aside sports--she was a talented softball player who had been pitching for her high school team in eighth grade--as she began concentrating more on music.

"My father, who had to be at work by 8:00, would get up really early to take me halfway to Nashville to meet my manager, who took me the rest of the way in," she says. That changed when she got her own driver's license, although, she says, "They still took me in when they could--I wasn't that great a driver!"

Whitney, who needed just two classes her senior year to graduate and who was given latitude to pursue her career by her principal, would stay at her manager's house and use her days to write with some of Nashville's best. She began attracting label notice and by her senior year, she had landed a record deal. She cut several sides, including a duet with country legend Kenny Rogers, whom she joined on tour, but ultimately she and the label parted ways about the time she met Bright.

"I was really young and wasn't sure of the musical direction to take," she says. Her writing had been improving steadily, though, and that was key to her progress.

" I began writing with Chris Tompkins, who has become one of my best friends. He really influenced my writing a lot and helped make me better. In fact, it was some of the stuff we wrote together that helped get Mark interested."

It wasn't long after she joined forces with Bright and Shanks that she gained interest from Warner Bros., and an acoustic showcase helped seal the deal.
"Afterward, they said, 'Go make the record,'" she says. They began recording in the fall of 2007.

The result, Right Road Now, sums up the journey, and Whitney is certain it captures her essence.

"I can honestly say there's nothing I would change about it," she says.
Bright concurs, and adds, ?Making the record with her felt like Christmas every day. We were honestly sad to finish it.?

If the right relationships, like the one she has developed with Bright, have provided the road, her own persistence has kept her moving along it. It's a trait she's had since she was tiny.
"I went to preschool with 13 little boys," she says with a laugh. "I was the only girl, so I acted like them. I would fight with them and I'd be in the naughty chair every day. Being stubborn and headstrong was a good thing when it came to music. You've got to know what you want to do in this business and hope eventually it will pay off."

For the young woman from Scotts Hill, it certainly has.