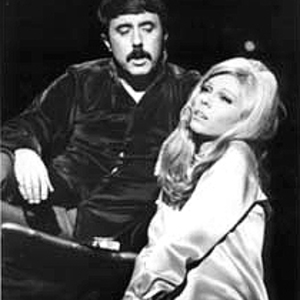 Nancy Sinatra & Lee Hazlewood was a collaboration between an American singer and actress and American country and pop singer-songwriter, and record producer. The young daughter of Frank Sinatra, Nancy Sinatra was an aspiring diva with a string of disappointments even her father's usually indomitable influence couldn't make into hits. Thus she was delivered to Hazlewood by fellow producer and Reprise bigwig Jimmy Bowen.

The young daughter of Frank Sinatra, Nancy Sinatra was an aspiring diva with a string of disappointments even her father's usually indomitable influence couldn't make into hits. Thus she was delivered to Hazlewood by fellow producer and Reprise bigwig Jimmy Bowen. The result, to almost everyone's satisfaction, was wall to wall hits for the next 5 years. Described by detractors as a tuneless drone, Nancy's voice was more importantly a tough and life-wisened instrument, and certainly not lacking in a canny sexuality which, inadvertently or not, anticipated liberated, strong female singing from Nico and Pat Benatar to Kim Gordon and Joan Jett. Hazlewood, naturally, saw these elements for the strengths that they were, and knew exactly how to highlight them sonically. He sculpted, again with the help of his now famous session men, a countryfied pop brew to bathe tunes which, though not without their novelty aspects, were more novel in the literary sense ? concisely constructed layers of sophisticated artifice operating on several levels of meaning, depending on how deep you were willing to go.

Sinatras singing career received a boost with the help Hazlewood, who had been making records for ten years, notably with Duane Eddy. Hazlewood became Sinatra's inspiration. He had her sing in a lower key and crafted pop songs for her. Bolstered by an image overhaul ? including dyed-blonde hair, frosted lips, heavy eye make-up and Carnaby Street fashions ? Sinatra made her mark on the American (and British) music scene in early 1966 with "These Boots Are Made for Walkin'", its title inspired by a line in Robert Aldrich's 1963 western comedy 4 for Texas starring her father and Dean Martin. One of her many hits written by Hazlewood, it received three Grammy nominations.

The first string of hits, ?These Boots Are Made For Walking?, ?Sugar Town?, ?How Does That Grab You Darlin'??, made Nancy Sinatra a worldwide star, and is perhaps what gave her the confidence to begin sharing the mic with Lee. The duet hits that followed include the hardcore C&W rollick of ?Jackson?, and the sublime ?Some Velvet Morning?, perhaps Lee's finest moment as a lyricist. It's important to note that Lee was stalking the very top of the pops with vaguely cloaked S&M and drug references, amid other implications of miscellaneous naughtiness, yet ironically, because of the context in which he worked, was the epitome of unhip. By contrast, Lou Reed was addressing similar subjects in his eventually more celebrated style, but within the hermetic confines of Warhol's Factory, an association which inevitably made his ?vanguard? work infinitely less assailable from a critical standpoint.

Sinatra enjoyed a parallel recording career cutting duets with the husky-voiced, country-and-western-inspired Hazlewood, starting with "Summer Wine" (originally the B-side of "Sugar Town"). Their biggest hit was a cover of the country song, "Jackson". The single peaked at #14 on the Billboard Hot 100 in the summer of 1967, when Johnny Cash and June Carter Cash also made the song their own. In December they released the "MOR"-psychedelic single "Some Velvet Morning", regarded as one of the more unusual singles in pop, and the peak of Sinatra and Hazlewood's vocal collaborations. It reached #26 in the USA. The promo clip is, like the song, sui generis. The British broadsheet The Daily Telegraph placed "Some Velvet Morning" in pole position in its 2003 list of the Top 50 Best Duets Ever. ("Somethin' Stupid" ranked number 27).

In the autumn of 1971 Sinatra and Hazlewood's duet "Did You Ever?" reached number two in the UK singles chart. In 1972 they performed for a Swedish documentary, Nancy & Lee In Las Vegas, which chronicled their Vegas concerts at the Riviera Hotel and featured solo numbers and duets from concerts, behind-the-scenes footage, and scenes of Sinatra's late husband, Hugh Lambert, and her mother. The film did not appear until 1975.

By 1975 she was releasing singles on Private Stock, which are the most sought-after by collectors. Among those released were "Kinky Love", "Annabell of Mobile", "It's for My Dad," and "Indian Summer" (with Hazlewood).

By the mid-1970s, as Nancy slowed her musical activity and ceased acting to concentrate on being a wife and mother, and collaboration with Hazlewood slowed down too.

After Rhino Records reissued their hit 60s duets on CD as Fairytales & Fantasies, Lee and Nancy reunited in 1995 for a small-scale world tour to rave reviews. She and Lee Hazlewood embarked on a U.S. tour playing the House of Blues, the Viper Room, the Whiskey-a-Go-Go, the now-defunct Mama Kin in Boston, and The Fillmore. 1995

In 2003 she reunited with Hazlewood once more for the album Nancy & Lee 3. It was released only in Australia. 2003