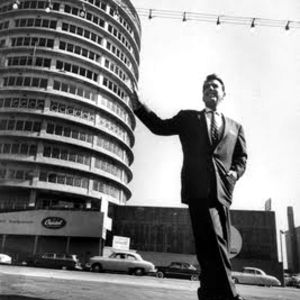 Ernest Jennings Ford (1919?1991), better known by the stage name Tennessee Ernie Ford, was a pioneering U.S. recording artist and television host who enjoyed success in the country & western, pop, and gospel musical genres. Born on 13th February 1919 in Bristol, Tennessee, Ford began his radio career as an announcer at station WOPI in Bristol, leaving in 1939 to study classical music and voice at the Cincinnati Conservatory of Music. 1st Lieut.

Born on 13th February 1919 in Bristol, Tennessee, Ford began his radio career as an announcer at station WOPI in Bristol, leaving in 1939 to study classical music and voice at the Cincinnati Conservatory of Music. 1st Lieut. Ford served in World War II as the bombardier on a B-29 Superfortress flying missions over Japan. After the war, Ford worked at radio stations in San Bernardino and Pasadena, Calif. In San Bernardino, hired as a radio announcer, Ernest J. Ford did the news and general announcing. He was assigned the job of hosting an early morning country music disc jockey programme titled "Bar Nothin' Ranch." To differentiate himself, he created the personality of "Tennessee Ernie," a wild, madcap exaggerated hillbilly. He became popular in the area and was soon hired away by Pasadena's KXLA radio.

At KXLA he continued doing the same show and also joined the cast of Cliffie Stone's popular live KXLA country show "Dinner Bell Roundup" as a vocalist while still doing the early morning broadcast. Stone, a part-time talent scout for Capitol Records, brought him to the attention of the label. In 1949, while still doing his morning show, he signed a contract with Capitol. He also became a local television star as the star of Stone's popular Southern California "Hometown Jamboree" television show. He released almost fifty country singles through the early 1950s, several of which made the charts. Many of his early records, including "The Shot Gun Boogie", "Blackberry Boogie", and so on were exciting, driving boogie-woogie records featuring exciting accompaniment by the Hometown Jamboree band which included Jimmy Bryant on lead guitar and pioneer pedal steel guitarist Speedy West. "I'll Never Be Free", a duet pairing Ford with Capitol Records pop singer Kay Starr, became a huge country and pop crossover hit in 1950.

Ford eventually ended his KXLA morning show and in the early 1950s, moved on from Hometown Jamboree. He took over from bandleader Kay Kyser as host of the television version of the NBC quiz show "College of Musical Knowledge" when it returned briefly in 1954 after a four-year break. He also portrayed the country bumpkin Cousin Ernie on I Love Lucy.

Ford scored an unexpected hit on the pop charts in 1955 with his rendition of Merle Travis' "Sixteen Tons", a sparsely arranged coal-miner's lament that Travis wrote in 1946, based on his own family's experience in the mines of Muhlenberg County, Kentucky. With a unique clarinet-driven pop arrangement by Ford's Musical Director, Jack Fascinato, "Sixteen Tons" spent ten weeks at number one on the country charts and eight weeks at number one on the pop charts, and made Ford a crossover star. It became Ford's signature song.

Ford subsequently helmed his own primetime variety programme, The Ford Show, which ran on NBC from 1956 to 1961. Ford's programme was notable for the inclusion of a religious song at the end of every show; Ford insisted on this despite objections from network officials who feared it might provoke controversy. It quickly became the most popular segment of the show. He earned the nickname "The Ol' Pea-Picker" becafter his catch-phrase, "Bless your pea-pickin' heart!"

In 1956 he released Hymns, his first gospel album, which remained on Billboard's "Top Album" charts for a remarkable 277 consecutive weeks; his album Great Gospel Songs won a Grammy Award in 1964. After the NBC show ended, Ford moved his family to Northern California and from 1962 to 1965, hosted a daytime talk show The Tennessee Ernie Ford Show from San Francisco, broadcast over the ABC TV network.

Over the years, Ford has been awarded three stars on the Hollywood Walk of Fame, for radio, records, and television. He was awarded the Presidential Medal of Freedom in 1984 and was inducted into the Country Music Hall of Fame in 1990.

Ford, who offstage contended with a serious alcohol problem that never affected his professional work, began suffering increasing liver problems in the 1980s that worsened in 1990, the year he was inducted into the Country Music Hall of Fame. He fell ill in 1991 after leaving a state dinner at the White House hosted by President George Bush, and died in a Virginia hospital on 17th October, exactly thirty-six years after "Sixteen Tons" was released and one day shy of the first anniversary of his induction into the Hall of Fame.

Ford was posthumously recognized for his gospel music contributions by being added to the Gospel Music Association's Gospel Music Hall of Fame in 1994.

Songs Of The Civil War

16 Tons Of Boogie: The Best Of Tennessee Ernie Ford

Swing Wide Your Golden Gate (With The Jordanaires) (Vinyl)